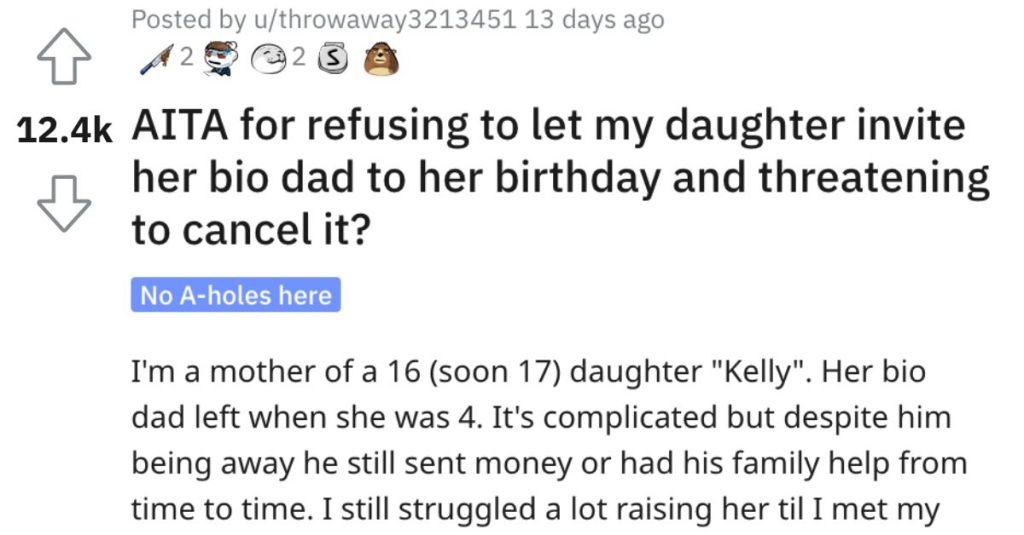 She Refuses to Let Her Daughter Invite Her Biological Father to Her Birthday? Is She Wrong?

As you already know, family gatherings can be…complicated…

Certain people don’t want to see certain other people, some folks get offended if specific individuals are invited, and the whole thing turns into a mess.

We’ve all been there!

So is this woman wrong for refusing to let her daughter invite her biological dad to her birthday party?

AITA for refusing to let my daughter invite her bio dad to her birthday and threatening to cancel it?

“I’m a mother of a 16 (soon 17) daughter “Kelly”. Her bio dad left when she was 4. It’s complicated but despite him being away he still sent money or had his family help from time to time. I still struggled a lot raising her til I met my now husband “Christopher”. Christopher is like a dad to Kelly. He’s the only father figure she had.

However, I found out that she’s reconnected with her bio dad through his family (his mother) which I wasn’t happy about but I didn’t make a fuss about it. Then she started mentioning him often, going to visit him while canceling plans to hang out with us etc. Her justification is that her dad is sick and might be (I say might because she’s a child and may not know what it meant) terminal. She sees him at his friend’s house where he’s staying now.

Christopher and I were planning her 17th birthday party at our house. Kelly told me that she’d like to have her bio dad come over to celebrate since he may not be able to be around next year. Christopher said no immediately. He said he won’t let that man come into his house which made Kelly cry saying that we were robbing her of a last chance to make memories with her dad after finally finding him again.

I told her that I don’t feel comfortable having him come to the house and be in the same room as him. Her stepsister said that both me and christopher are overreacting and that Kelly wants her dad to take part in her birthday so badly. Christopher left the house and I snapped at Kelly and threatened to cancel the whole thing.

Later when we calmed down I suggested she goes to celebrate with him but she said her friends and their parents won’t be able to attend. She also said he can’t throw her the party since he’s sick.

We had another argument and she started ignoring me and christopher while staying in her room. She’s saying she won’t forgive me if I let her dad miss what could be her last birthday with him.

Am I being unreasonable or is she?”

This reader said she’s NTA but she needs to listen to her daughter about what’s going on here. 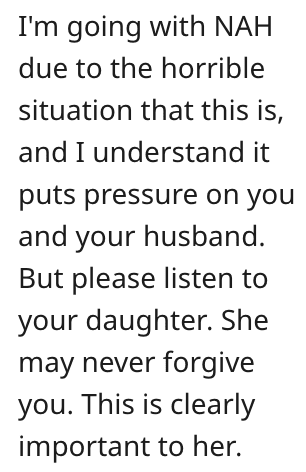 And another person said she treats her daughter like a child and this might permanently damage her relationship with her biological father. 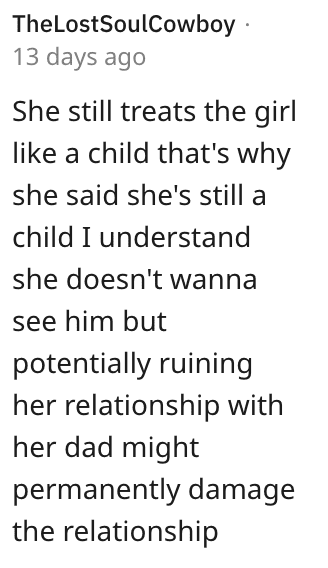 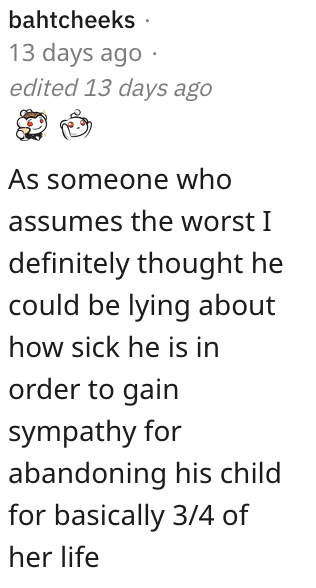