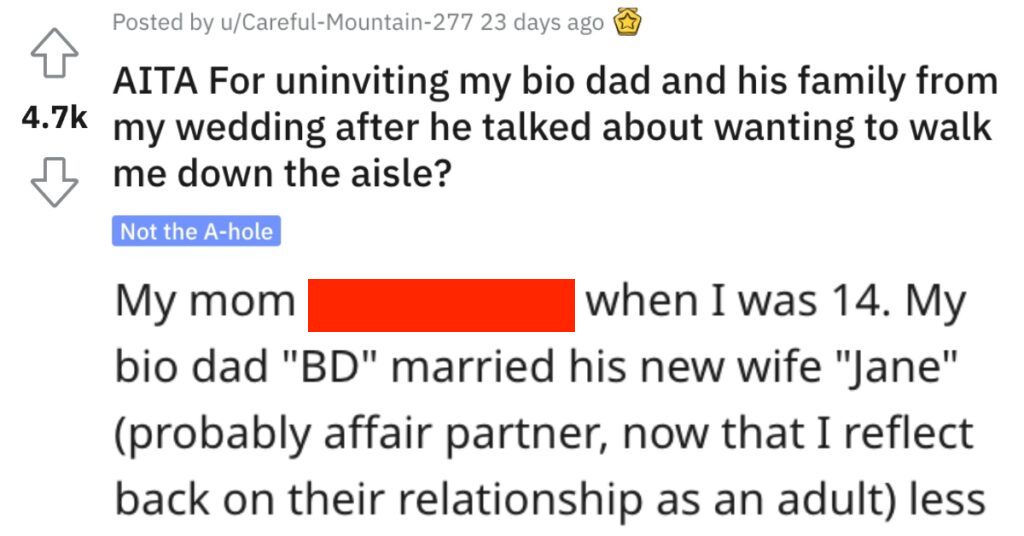 She Uninvited Her Dad and His Family From Her Wedding. Was She Wrong?

You know things have to be pretty bad if you uninvite people from your wedding…especially if it’s your own dad.

But that’s exactly what happened in this story from Reddit’s “Am I the A**hole?” page.

Read on to get all the details and let us know what you think in the comments.

AITA For uninviting my bio dad and his family from my wedding after he talked about wanting to walk me down the aisle?

“My mom passed away when I was 14. My bio dad “BD” married his new wife “Jane” (probably affair partner, now that I reflect back on their relationship as an adult) less than a few months after mom d**d.

BD brought Jane and her kids to mom’s funeral. After BD and Jane got married, BD treated Jane’s three kids as his own while basically pushing me to the side. Something he did often was telling me “Oh, can you hold this?” while passing me a present he bought for one of my step-siblings. He would smirk at me and say something like “Nice, isn’t it? Perhaps if you had gotten an A on that math test/Done a better job at cleaning the house I might have gotten you one too.”

(I also want to note BD and Jane expected perfect grades and constant chores from me while my step-siblings were just encouraged to try their best and had no chores.) I went to live with my maternal grandmother after a few years because I was in such a bad place mentally from living with BD and Jane.

I met my fiance “John” in college, and we will be marrying in September. I am extremely close with my family-in-law as they have basically all adopted me. I am especially close with John’s parents. I have barely kept in contact with BD and have just about no contact with Jane or my stepsiblings. BD emailed me saying if he should show up to my wedding two days or the day before the day because he expected to walk me down the aisle.

I told BD that my FIL was walking me down the aisle. BD responded how “Come on, you must be joking right?” and started getting really aggressive and saying stuff like how he gave me life and provided for me for 17 years so this honor is his right. I responded to BD that he lost that honor when he threw me aside for his new wife and kids and he’s lucky that I haven’t gone NC with him.

BD continued to try and argue how it was my right and acting like my decision to have FIL take me down the aisle was some temper tantrum. I told BD that if he cannot act civil and stop making my day about himself, he and his new family are no longer invited to the wedding. I have also blocked his email and plan to keep it blocked for a while.

Friends and family of my BD and Jane are reaching out to me telling my “how heartbroken” BD is that I’m not letting him walk down the aisle because he is never going to have the opportunity to walk his daughter down the aisle again and I’m going overkill to ban them.

They’re also saying how I look just like my mother, so it was probably hard being reminded of his wife when he looked at me and that’s why he was “distant” after marrying Jane. I told them none of those excuses are good and plus it’s my wedding and I can do as I want. But they told me that attitude made me a textbook Karen and Bridezilla.

John and his/our family support my decision, but BD and Jane’s loved ones say I’m not even realizing how important this honor is for BD, so I’m looking for non-biased perspectives on here.”

This person said she’s NTA and that her bio dad owes her an apology. 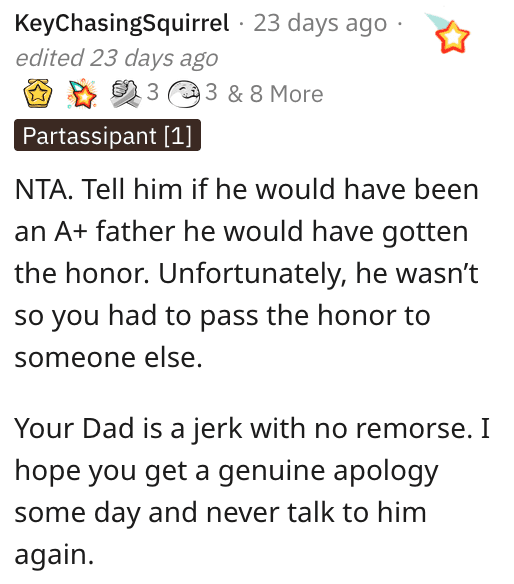 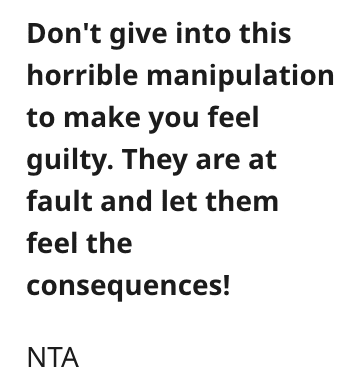 And this individual said she’ll be much happier with these toxic people out of her life.