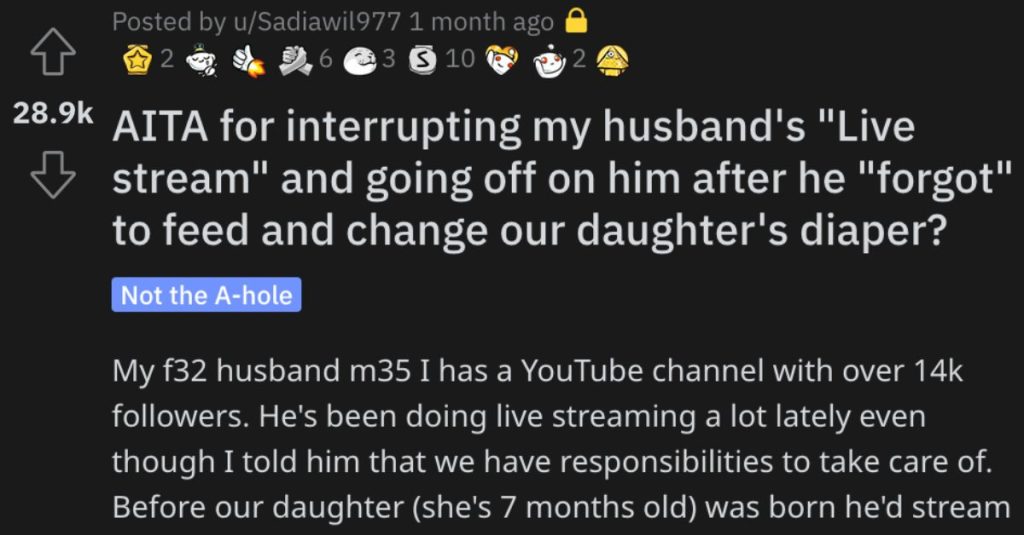 She Yelled at Her Husband Because He Forgot to Feed Their Daughter and Change Her Diaper. Is She Wrong?

But don’t let me influence you, okay?

We want you to read this story from Reddit’s “Am I the A**hole?” page and make up your own mind.

Check it out below and let us know what you think in the comments!

AITA for interrupting my husband’s “Livestream” and going off on him after he “forgot” to feed and change our daughter’s diaper?

“My f32 husband m35 I has a YouTube channel with over 14k followers.

He’s been doing live streaming a lot lately even though I told him that we have responsibilities to take care of. Before our daughter (she’s 7 months old) was born he’d stream randomly and spend lot of time with his “followers”. Answering questions and engaging in conversations.

He keeps saying that his followers are good for his mental health and that engaging with them weekly makes him become better at socializing and communicating.

He’s been complaining about wanting to do a live stream for days. I told him we’d look at our schedule and see if we could get him some time to make it happen. Apparently, this wasn’t good enough. Yesterday I had to go grocery shopping and asked him to keep an eye on our daughter while she was asleep. He said okay.

I was gone for 4hrs but kept calling him to see if everything was OK. He’d tell me she was alright and that she was sleeping. I started getting this weird feeling something was wrong because, she must’ve had been hungry or needed a diaper change.

He argued that everything was fine. I immediately went home and when I entered the house I didn’t find him, I shouted his name but got nothing. I went into the bedroom and saw that my daughter was awake and her diaper wasn’t changed…and worse was that her bottle was even touched. I was confused I got out and noticed that his office’s door was closed.

I figured he was doing a live streaming from the noise I heard. I was beyond seething I barged into the office and saw him sitting. I blew up while he was trying to turn his mic off and telling me to stop but I didnt stop. I berated him for leaving our daughter unattended and with no milk nor diaper change.

He freaked out on me saying I just ended his entire channel and destroyed his fan base for interrupting his live stream and embarrassing and scandalized him like that. I told him to not say a word but he kept yelling calling me out of control and unhinged. He was almost crying so I had to leave the office.

He kept fighting with me til I decided to go stay with my mom. He started blaming me for ignoring his needs after he already expressed them and that he forgot to do what I asked him and I’d cost him so much. Now us telling to come back home because he misses his daughter.”

One individual said she’s NTA and that her husband was neglecting the baby. 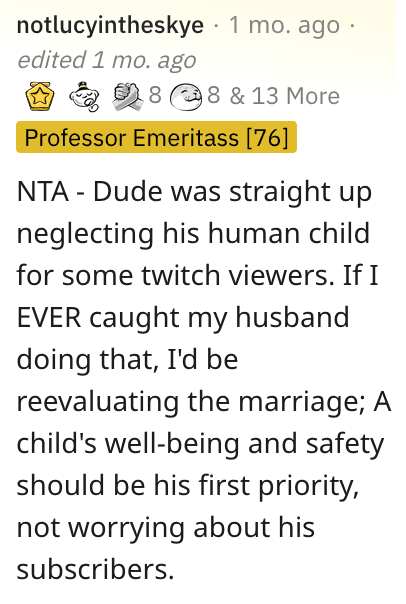 And this reader said she WILL be the a**hole if she doesn’t do something to fix her husband’s behavior. 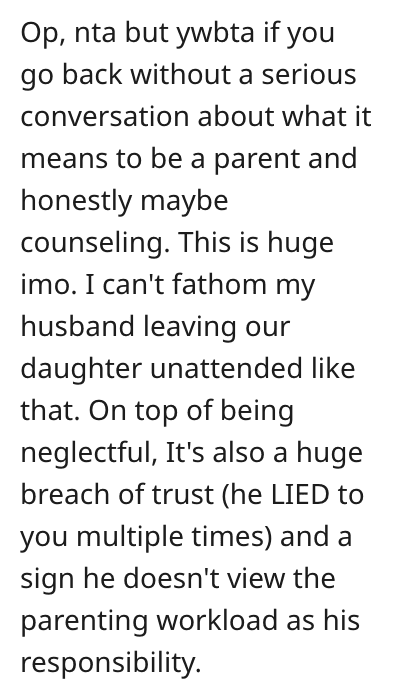 And this Reddit user also said NTA and said the husband’s priorities are messed up. 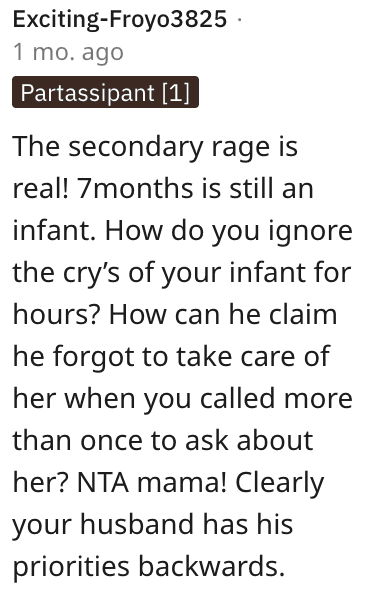