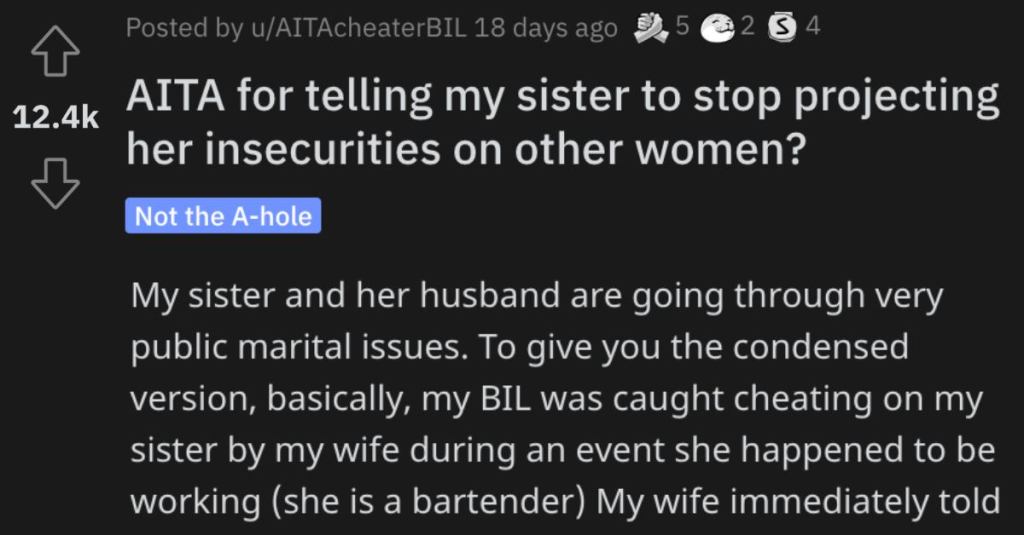 They Told Their Sister to Stop Projecting Her Insecurities Onto Other Women. Were They Wrong?

A lot of folks out there tend to do it, but projecting your insecurities onto someone else never ends well.

But, as we all know, talk is cheap…

Check out this story from Reddit’s “Am I the A**hole?” page and see if you think this person was out of line.

AITA for telling my sister to stop projecting her insecurities on other women?

“My sister and her husband are going through very public marital issues. To give you the condensed version, basically, my BIL was caught cheating on my sister by my wife during an event she happened to be working (she is a bartender) My wife immediately told my sister, (in PRIVATE, without telling my BIL that she knew) and my sister proceeded to get very angry with my wife, accusing her of “ruining her marriage.”

This culminated in my sister breaking down and screaming at my wife during a family dinner; calling her a “whore who likes to break up marriages,” and a “person with no hobbies.” My sister’s very public rant about my wife led to my BIL admitting, in front of my family members, that he cheated. This, of course, led to more drama.

This all happened a few months ago and as far as I can tell, my sister and her husband are not going to spilt up.

After this whole situation, I decided to distance myself from my family for a little bit. I thought that my sister needed time to process everything – and I didn’t think it was fair to my wife to subject her to my sister’s rage. I sent a long text message essentially telling her that I wanted her to sincerely apologise to my wife. My sister apologised and I thought that it would be the end of that.

My dad invited my wife and I to celebrate his birthday at his place. I knew that everyone would be there, including my sister and her husband, so I was a bit hesitant to go, but my wife assured me that everything would be alright.

To start, everything was going well. My sister practically avoided us (which I didn’t mind) and my BIL was glued to her side the entire time so we didn’t really face any drama. Everyone was cordial towards one another and no one mentioned my BIL’s infidelity.

At one point, I think my wife asked my BIL to move over so that she could sit down (she is currently on crutches) and when my BIL got her a chair and helped her sit down. My sister , got extremely mad at my wife for “being too friendly with her man.” (Her exact words)

My wife was confused and explained that she just wanted a seat, but my sister wasn’t having any of it. She started full-on yelling at my wife for “doing what she always does” and “ruining other people’s relationships.”

My sister has a loud voice, so literally everyone stopped and looked at her and my wife. My wife looked pretty embarrassed and just muttered a “sorry,” and even wanted to go stand up, but I butted in and told my sister to stop yelling at my wife and to stop acting “extremely insecure in front of other women and go for counselling or something.”

For whatver reason, my sister ran out the room crying after that and my wife and I left soon after.

My BIL texted an apology on behalf of my sister, but told me that I was a little rude and that I should apologise. My wife thinks that I may have been too harsh. My entire family is spilt, some saying that I was too mean to her.

This reader said that this person is definitely NTA. 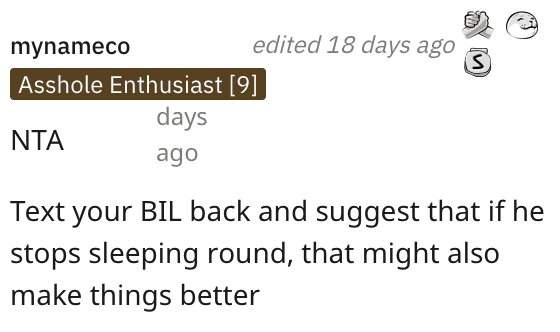 Another person agreed and argued that the sister needs some counseling. 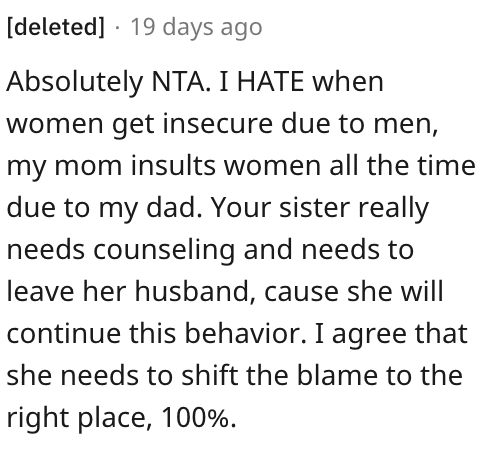 And this Reddit user said that women need to band together instead of fighting with each other. 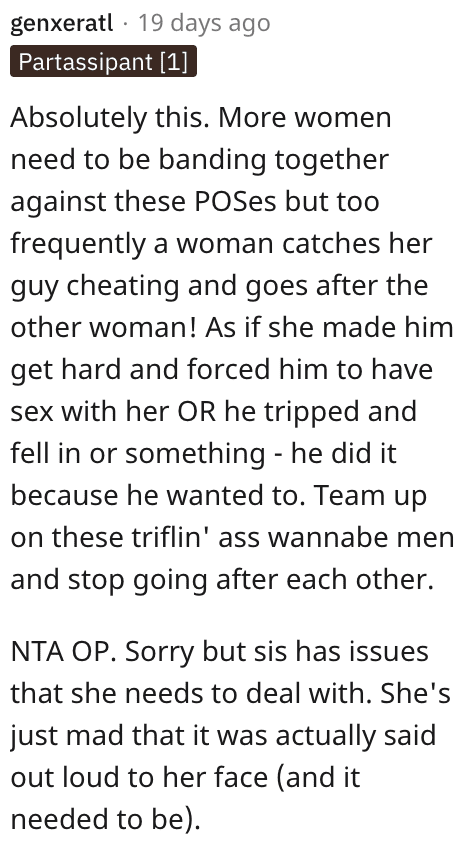