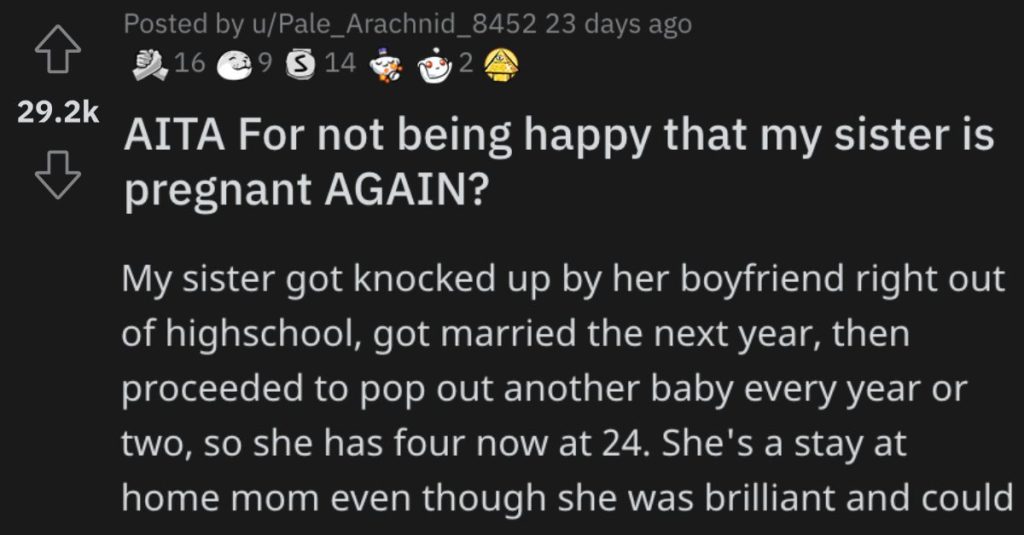 They’re Not Happy That Their Sister Is Having Another Baby. Are They Wrong?

I always get confused by people in this day and age who decide to have A LOT of kids when they’re young.

I mean, to each their own, but it just kind of seems like it would be a nightmare.

But what do I know?

AITA For not being happy that my sister is pregnant AGAIN?

“My sister got knocked up by her boyfriend right out of high school, got married the next year, then proceeded to pop out another baby every year or two, so she has four now at 24.

She’s a stay at home mom even though she was brilliant and could have gotten a free ride to a great University. Since hers are the only grandkids, our parents fawn over her like she’s the next coming of Christ. They gush over over every new tooth or haircut like it’s some huge achievement.

Problem is, her husband’s business wasn’t great even even before COVID, and is barely limping along now. Sister doesn’t work, and my parents have limited income. So guess who’s constantly being told to “lend” them money for s**t like school fees, car seat, car payment, new stroller, etc.

They don’t even ask! My mom just texts me “your sister needs $X.XX for the kids” and I’m supposed to cough up. If I complain, they accuse me of being jealous because I don’t have a husband and family even though I’m older (I’m only 26!)

So over Easter I notice my sister isn’t drinking and I think oh god, here we go again. Sure enough, she stands up and announces that she’s been inseminated with yet another precious miracle. Everyone’s gushing and I just try to stay quiet and out of the way.

Later she asks me if everything’s alright and I try to play it off but she pushes so I asked her if she and her husband could really afford another baby. She very snippily replies “God will provide like he has so far,” which really pissed me off.

I yelled that no, actually god didn’t provide for her babies, I did, and I wasn’t going to giving them any more handouts. It devolved into a big argument with everyone shouting at me, and basically I’ve been banned from my family unless I apologize. I haven’t apologized.

It’s been radio silence except for one text from my mom saying that if my sister miscarries it’s my fault for stressing her out. I asked if my sister was showing any symptoms but no one will answer or tell me. IDK. I don’t think I’m TA but I don’t want to be the reason she miscarries.

Also, I think I might be TA because secretly I think it would be better if she did even though I wouldn’t say that to her.

One person said this person is NTA and they had some good advice. 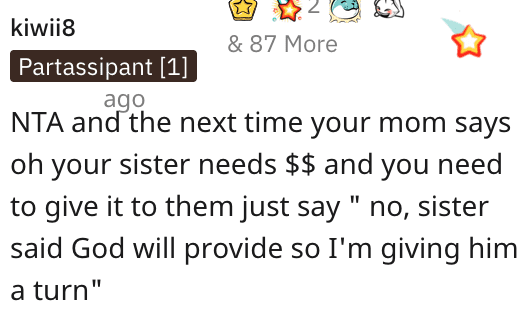 Another reader made a good point about what will probably happen… 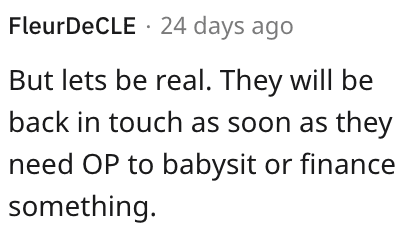 And this Reddit user said this person is going to need to establish some boundaries with her family. 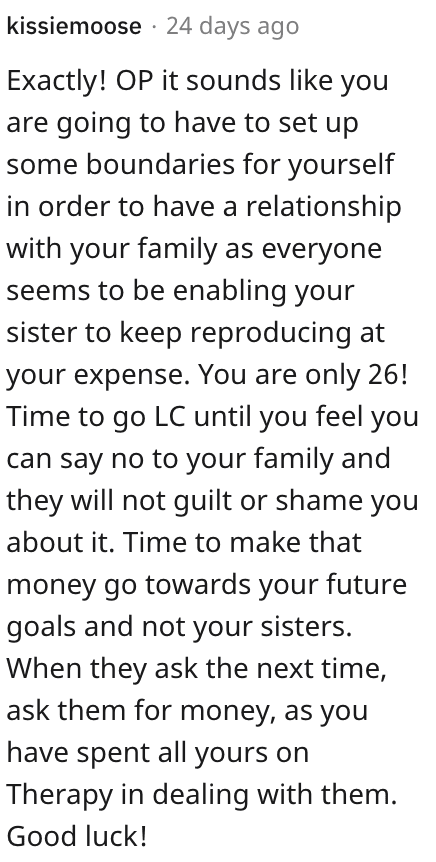