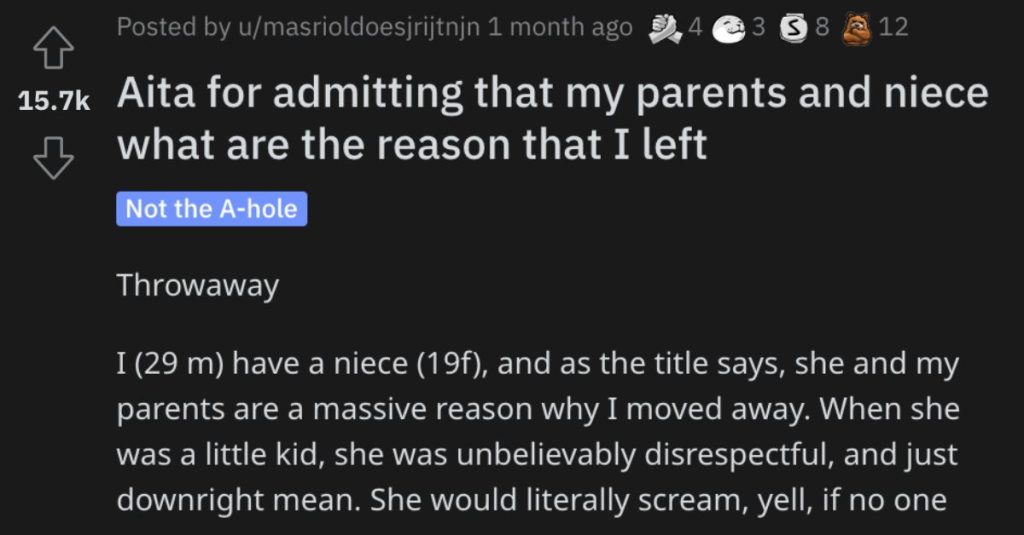 This Man Told His Family the Painful Truth About Why He Moved Away. Was He Wrong?

Especially when it comes to laying down some hard truths that are bound to hurt peoples’ feelings.

And that’s exactly what happened when a man shared his story on the “Am I the A**hole?” page on Reddit…and he wants to know if he acted like, well, an a**hole.

AITA for admitting that my parents and niece what are the reason that I left?

When she was a little kid, she was unbelievably disrespectful, and just downright mean. She would literally scream, yell, if no one was around she would, she would cuss at me, and occasionally, she would do random c**p that she would have never done if my mother (her grandmother) or her parents were around.

For example, she would spit, throw stuff, purposely spill stuff, and if I ever stopped her or told her to stop she would run to grandma and tell her I was being mean, and I would get in trouble, and if I didn’t stop her I would still get in trouble.

A month before my 18th birthday, I told my parents that I wanted to visit NYC, and they said that was fine (we lived in South Carolina if that matters, and my niece’s birthday was 2 days before mine). Three days before my birthday (and two before we were supposed to leave) I already got my bags packed, and they saved up, booked the tickets, and were ready to go.

The next day my parents informed me that we couldn’t go because they had planned a huge surprise parties for my niece, but they miscalculated or something, and it was a lot more expensive than they thought (if I remember correctly it was about 6,000 dollars), so they used the money that they saved for the trip on the party.

When I asked them why they couldn’t just cancel it instead, they got mad, and my dad said I was being an entitled brat, and my mom said I was being selfish for not wanting my niece to enjoy her “special day”. Well, they didn’t cancel it, but instead moved it back by two days due to some kind of schedule mix up. I was honestly tired of their bull, so I moved to New York, and went to college there and that’s where I stayed, and now I’m an attorney with two amazing sons.

About two weeks ago, I got a phone call from an uncle about a family reunion (it was a couple of days ago), I thought it would be nice for my sons to meet some of their family members (if I recall correctly the only people they know are the people who moved up to New York, which is a couple of my cousin’s and my younger brother). So, we went, and when I saw my niece she acted the same as she did before.

Later In the evening, my aunt asked why I moved to New York. My mother answered for me, saying that it was, so I could go to college. I found it unbelievably amusing that she thought after all these years that was the reason, so I started laughing uncontrollably.

My mother asked why I was laughing, so I told her that NYU wasn’t one of the reasons why I left, and it was because they were c**py parents who loved and cared about their s**tty granddaughter more than their son, and my niece was, and is still the perfect combination between a crotch goblin, a brat, and a s**t stain. My mother called me an ungrateful, disrespectful, brat, and my brother and SIL were pissed. I was a little pissed myself, so I just left.

And here’s what readers on Reddit had to say about this story.

This reader said that not only is this guy not an a**hole, but this was probably perfect timing. 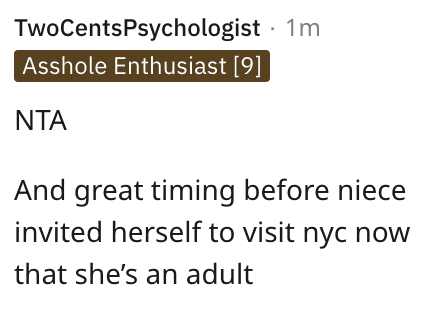 Another Reddit user said that this guy shouldn’t have waited this long before laying down the hammer. 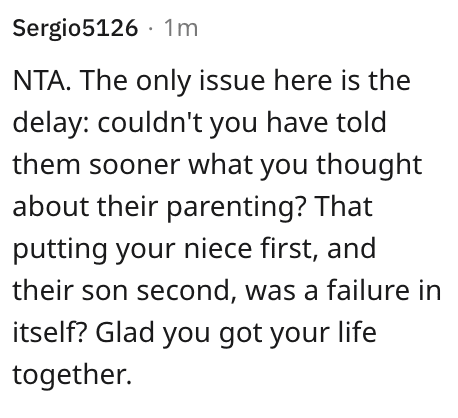 This person said that this guy isn’t wrong, but he probably could have handled it better, considering he’s an attorney. 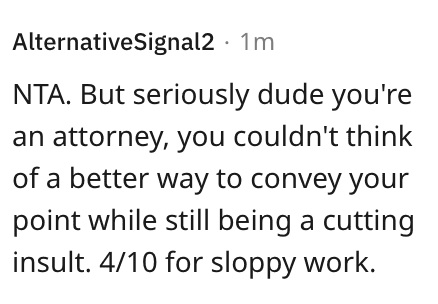 Finally, this Reddit user said that this story doesn’t make a whole lot of sense and this guy seems to be holding some kind of grudge. 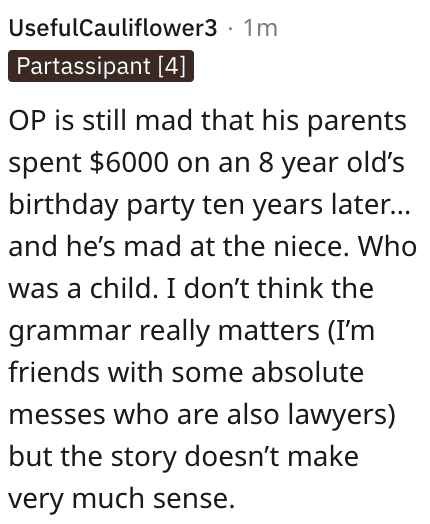