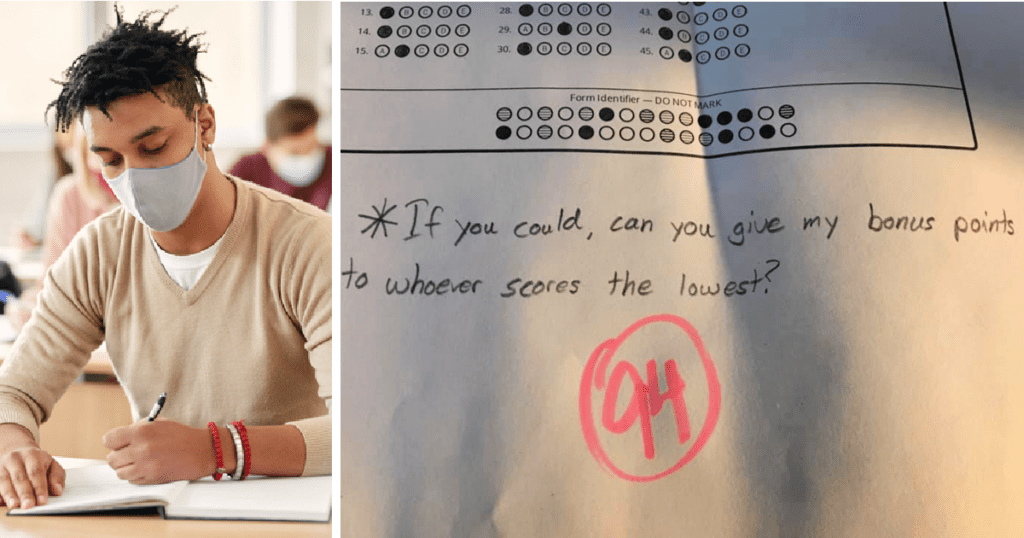 It can sometimes seem like there aren’t many people willing to go out of their way to help other people these days – especially not to help people they don’t know – but every once in awhile a story comes along that reminds us that’s just not true.

Teacher Winston Lee must not see the proof of goodness in humanity all that often either, because when one of his students blew his mind with a selfless act of kindness he just had to share it online. 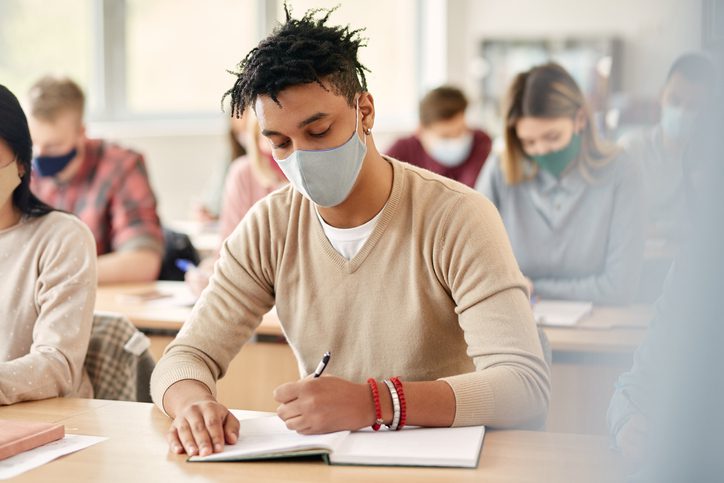 Most people have a competitive streak (some wider than others), and when it comes to students who are at the top of their class, I would guess that goes at least double. That doesn’t mean they can’t have an equally big heart, though, which is actually what history teacher Winston Lee found when he went to grade a series of tests on WWII.

The student in question is a junior at Letcher County Central High School in Whitesburg, KY. He’s a great student, near the top of his class, but Mr. Lee found more than the expected A grade when he went to review the kid’s test

He found a note:

“If you could, can you give my bonus points to whoever scores the lowest?”

Mr. Lee was so moved that he posted about the incident on Facebook, figuring that other people would love to hear some uplifting news from the hallowed halls of American high schools.

“One of my guys, a straight A+ guy, offers up his 5 bonus points to someone in need. Anyone. Totally offering up what is rightfully his, his earning, to any peer that may have been struggling especially hard the day of the test.

He didn’t care if he considered them a friend, didn’t care if they were cool, didn’t matter to him what situation had caused them to score lower, he just wanted to help, be kind, commit a loving act.

This note gave me so much hope. Let us all be a little more like this young man!!”

When the story caught the attention of Good Morning America, Lee said on the show that this was the first time in 12 years of teaching that he’d witnessed such a selfless act from a top student.

“I was pleasantly surprised. He is the type of kid that would often show compassion in the classroom. The guy is awesome We’ve had huge political debates in class this year (we keep it friendly), and my man always has some awesome, intelligent input.”

Mr. Lee had offered five extra points to anyone who participated in an exam review game the day before the test, and those points would have raised the anonymous student’s grade from a 94 to a 99, had he kept them. 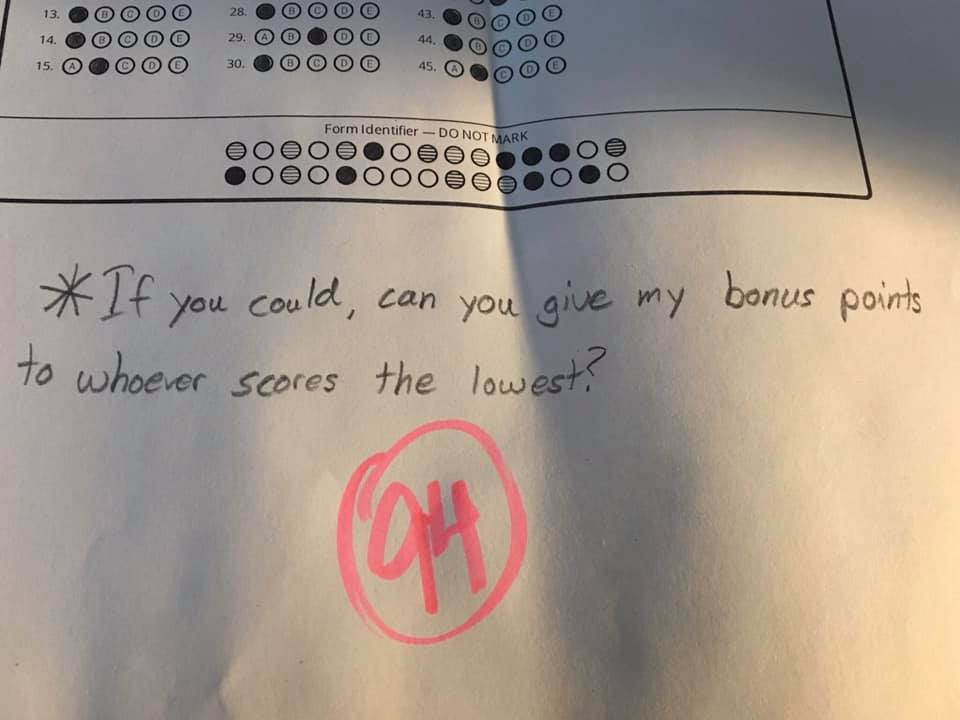 “Students had played an interactive review game the day before, playing along on an app in an attempt to score points by answering questions concerning the exam content. Of course, he killed it, earning him 5 bonus points for the WWII exam.”

Lee says that most honor students cling to every point possible, but that the student’s act of kindness raised a classmate’s grade from failing to passing.

“She was really thankful so it turned out great. She does not know who gave her the points.”

Many people enjoyed the spirit of the story, while others wondered whether or not this was the correct thing to do, as a teacher, and whether or not it was fair to the other students to raise one person’s grade to passing due to no effort on their own part.

Lee, though, says it was a unique situation and he handled it as he saw fit.

“Ah, other questions to mind, ‘correct classroom procedure?’ I’m not sure. Is being led by compassion, kindness, and love ever considered a wrong answer? …Not all are great test-takers or in a comfortable situation at home that allows them to focus on studying. I feel really great that it helped this student from 58 points to passing. We don’t know what her situation may have been.”

Basically, anyone who thinks this teacher did the wrong thing hasn’t learned the lesson that this high school junior seems to have grasped innately, which is that everyone can use a little help sometimes.

If you’ve got the cash, or the time, or the five bonus points and you don’t need them yourself, why not put them out into the universe and just see what happens?

It’s something to think about, anyway.