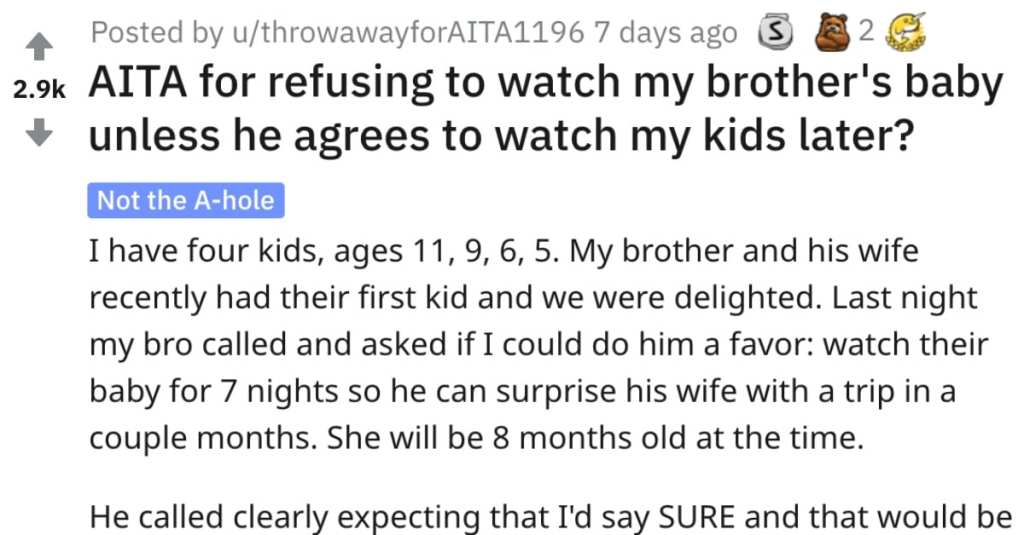 Was This Person Wrong for Refusing to Watch Their Brother’s Child? Here’s What People Said.

Can you watch my kids tonight?

How about FOR A WEEK?

I guess family members can ask that of each other, but it seems a bit extreme.

But that’s what happened to this person who shared their story on the “Am I the *sshole?” page on Reddit.

Let’s see what happened and how people on Reddit responded.

My brother and his wife recently had their first kid and we were delighted. Last night my bro called and asked if I could do him a favor: watch their baby for 7 nights so he can surprise his wife with a trip in a couple months. She will be 8 months old at the time.

He called clearly expecting that I’d say SURE and that would be the end of it. But honestly, I was very hesitant. The baby has major sleep issues (SIL posts a lot on SM about it) and a week is a long time. Also I suspect it will actually be 8 nights because he needs to drop the baby at our house (3 hours away). I told him I’d get back to him and he was clearly annoyed.

I did not want to do it because honestly, someone else’s baby is just different and taking her for a week is daunting. But I did want to help. Finally, I landed in what I thought would be the perfect solution for everyone: I would suck it up for a week of no sleep, if in exchange my bro agreed to watch my crew for three or four nights this fall so I could take my husband somewhere to celebrate a milestone bday.

He thinks I’m TA because a) I’m (mostly) a SAHM and supposedly have time, b) there are 4 of my kids to 1 of his, c) he and his wife have jobs and they would have to burn vacation days to watch mine, d) ‘our house is too small” and they don’t want to spend the weekend at mine.

My position: I might have four kids, but they are older and so much easier than an infant. They do not need constant supervision and do not stay up half the night screaming. I’d sooner watch 4 big kids for 7 days than an infant for 3, tbh. I also resent the implication that I have nothing better to do.

My brother said he couldn’t commit to babysitting at a specific time right now but asked me to just agree and ‘we’ll work it out later’ because he wanted to tell his wife about the trip. I said no. He said he’d be screwed if I didn’t because he already paid for flights (‘too good a deal to wait’) and his wife ‘desperately needs a break.’

I suggested he just add the baby as a lap infant and take her too (I have mentioned before we’ve used agencies for babysitters so we could have an evening or two out on vacation) and he got very p*ssed and said he knew my refusal is all based on me ‘judging him’ for ‘not wanting to parent like YOU.’

The context of this comment is that we moved abroad for a few years when ours were little and had the last two overseas. We traveled extensively with the kids from the time they were tiny. But that has nothing to do with my refusal — I’m obviously pro kid-free travel since this is the source of the conflict! — it is all about the length of time I’d be watching a young baby, with likely no actual payback.

Why I might be TA: when I texted my group chat, one friend totally agreed with me, one said she understood my side completely but ‘would probably do it for family if it was her’ and the last one hasn’t said anything so I suspect she thinks I’m being mean.”

Wow…that’s an unusual one.

This person said a baby this young shouldn’t be babysat by someone for more than a short period of time. 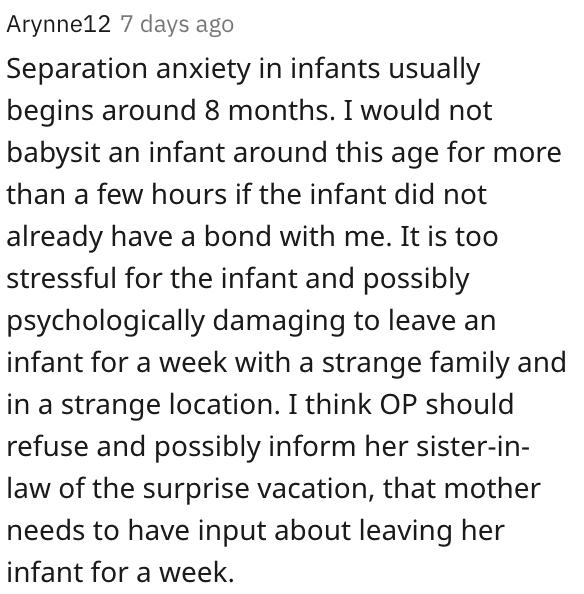 Another reader said that she had a bad experience watching a baby…and that was only for a few hours. 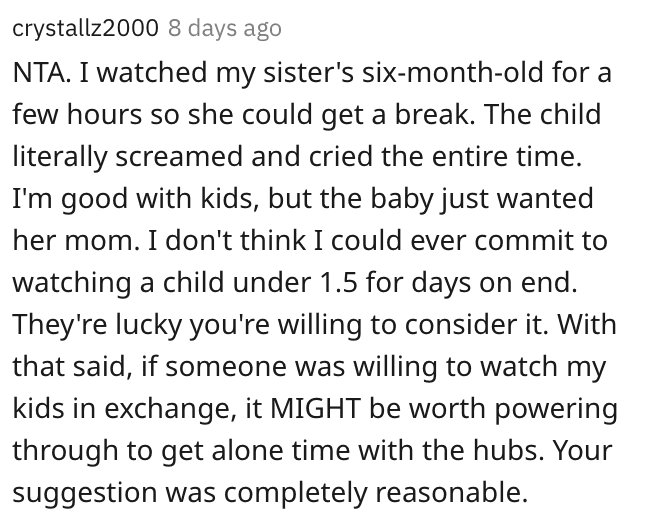 This individual echoed my sentiment: who asks someone to watch a baby for a whole week?!?! 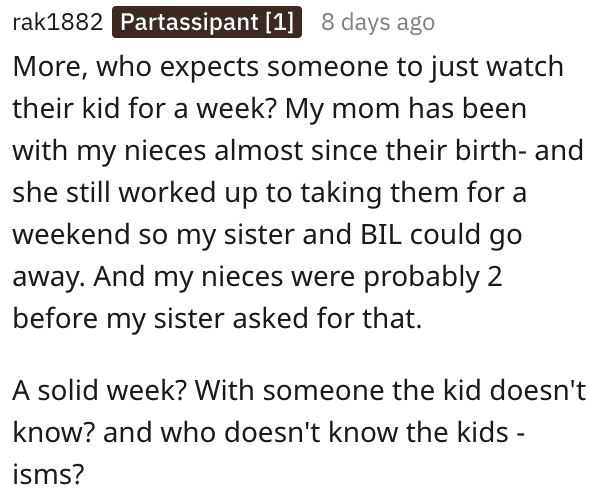 And another person chimed in and said that this is a HUGE request that the brother is making…and this person already has FOUR KIDS at home. Jeez… 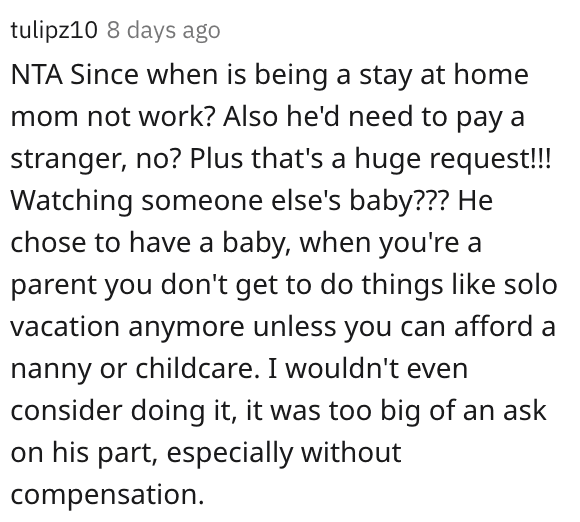 Okay, now it’s your turn to sound off.

In the comments, tell us what you think about this person’s story.