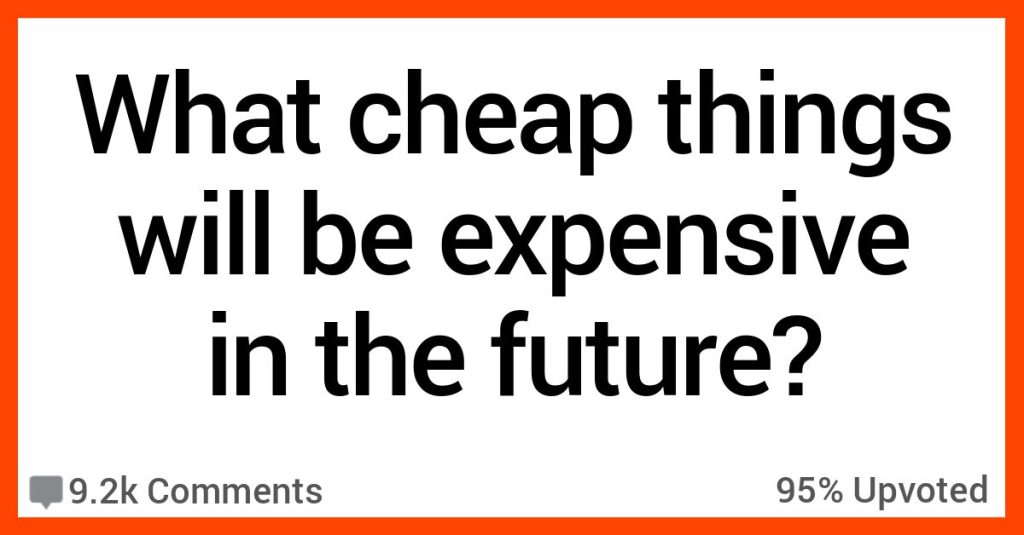 What Cheap Items Will Be Expensive in the Future? People Share Their Thoughts.

We all know that the world is constantly changing, but it’s still kind of surprises us when it does. We go about our business, figuring something (like gas, when you’re a teenager) will be the same prices for the rest of our lives.

The truth is, our economy is always in flux, and supply and demand can also turn on a dime.

Here are some things that are cheap now, but that people think will be much more expensive in the future.

If the world supply for freshwater became that competitive, there would also be a tech arms race for distilling salt water into a potable source.

Which exists, but is horribly energy-intensive and produces a pretty toxic brine that you need to pump back out to sea somewhere away from your intake.

2. Ever thought of becoming a vegetarian?

Meat, even though it’s already gone up a considerable amount in the past year. Shortages of all types of meat have moved us to move to a much more plant-based diet.

They sure are pushing it with those commercials every hot minute. Can’t even watch any long form videos anymore.

Electricity. As electric cars become more common infrastructure needs updating. Even without an electric vehicle everybody will get hit with some sort of rate increase to cover the costs of updating.

And as is typical with governments, they will probably implement a road tax on charging stations and find a way to have an additional tax on any home chargers you use to charge a vehicle.

Anything related to the Xbox 360, PS3, or Nintendo Switch. Right now they are at their nadir and people will pay you to take them.

Pretty soon they will start getting collectable and prices for games, consoles, and accessories will go up.

6. Andrew Jackson will be thrilled.

Bungalows in rust belt climate haven cities In 10-20 years gonna be so expensive.

I have one of these. Used to be able to buy one for under $70k 10 years ago. $150k today if it’s nice, $120k if it’s a fixer upper. They’ve gone through the roof. It’s cheaper right now to build than to buy, even with the stupid high construction prices.

8. This will hurt more than you think.

Chinese products. China by the day is becoming a more powerful and rich country. With such a low unemployment rate and their economy growing at unprecedented speeds, wages have started increasing as have quality of life.

Even under a communist government people are slowly getting better jobs and China is now rich enough to start importing foreign goods from much poorer countries instead of having their own people make low quality items.

9. I’ll have to think about this one.

Silver is the most undervalued strategic, industrial and monetary metal on the planet.

10. Take this answer and apply it to your grocery budget.

Food is as cheap as it will ever be. Climate change is going to cause those prices to skyrocket.

CDs and DVDs. Vinyl records have come back and so will other physical media. Streaming has a place but so many people have already started experiencing streaming fatigue and not actually owning anything but paying for it all to be in the “cloud”

I think many people will and do choose to buy vinyls or CDs because while it’s convenient to being able to pay for online access for media, having a physical copy of something you like is very satisfying.

Chocolate. Cocoa trees need years to grow, 7 years before flourishing and giving first nuts. They need specifical heat and humidity throughout their growth.

Due to global warning and climate changes, current plantations will no longer producer any nuts, and the ideals spots will move to North (in North hemisphere) faster than trees grow.

This will lead to a lack of cocoa production within 50 years. Assuming Asia is still a growing market for chocolate, the supply will reduce while the demand rise hard.

I was interested in investing in cocoa, but I definitely don’t have any funds for this. I’m 100% sure I’ll regret it in my olds days

Helium. The fact i can get balloons for decoration filled with such an essential element is crazy.

It’s filtered out of natural gas and came from the decay of radioactive elements. When it’s gone, it’s gone.

Coffee. Global warming is reducing favorable places for coffee to be grown.

15. You’ll go green whether you like it or not.

Parts for combustion vehicles, as the economy of scale moves in the opposite direction then things like spark plugs and filters will become more expensive.

16. Better options are on the horizon.

They’ve already started to go up a huge amount, but used cars.

Cork, vanilla and many fish. The sources for them are not being properly maintained and are shrinking.

Vanilla has already more than doubled in price since 2015. There was a hurricane or something that wiped out most of the crop in Madagascar, which is where the vast majority of vanilla comes from.

About a decade ago I bought a 16oz bottle of fancypants vanilla bean “crush” (aka vanilla paste, basically a syrup form of vanilla extract) for a little over $20. Nowadays that same amount would run you at least $60.

Alcohol-based extract is generally cheaper than paste, but still way more expensive than it was as little as 6 years ago.

Real estate. It’s not that it’s cheap now — but in future decades I bet it’s going to be much more expensive relative to median income.

Land ownership has recently sort of crystallized where I live. Only the very rich can earn enough money to buy land. Everyone else inherits a family home or doesn’t.

If you want to work hard and buy a home? You can’t, but maybe your children or grandchildren will be able to if you have an OK job and save aggressively. I remember working it out as something like 80 person-years of savings at an upper-middle class job, if you have no kids,.

Companies are lobbying hard to fight right to repair legislation that would make it so you can’t actually fix your own devices or have a repair shop do it for you. It’s already pretty bad with companies like Apple, Tesla, and John Deere.

They design stellar products but if anything goes wrong with them you’re almost always going to be told to buy a new one (apple) or to ship your heavy ass piece of machinery both ways for days to weeks to have it repaired when you should otherwise be able to do it yourself.

Farmers are moving back to ancient tractors since they can fix them themselves and get parts for a reasonable price, or they’re using bootleg Polish JD software to bypass the DRM in their tractors so they can actually fix these things in a timely matter. Sometimes having a $100 sensor break in your tractor can cost you upwards of $5000 with shipping, rigging, and labour. Not to mention a potentially lost harvest if it takes too long to fix.

20. Or they weren’t paying attention.

anything that comes from nature because the rate at how we harvest resources is faster than their recovery rate, they’re definitely gonna be scarcer.

Bananas. At least, the kind of bananas we’re used to now, the cavendish banana.

The fusarium fungus is slowly spreading through the world’s cavendish banana plantations, killing all of the plants.

Gasoline. I know everyone complains about the cost but…where I live it’s around $2.80 a gallon right now. A 2-liter of soda (half a gallon) is about $1.80.

A gallon of a non renewable fossil fuel is cheaper than the equivalent amount of fizzy sugar water.

23. Will life even be worth living?

Explanation: due to warmer and drier conditions and fungal diseases, and rising demand

BUT, they arent going to go fully extinct, they MAY be a bit more expensive, but thats it.

Its not cheap now but meat is gunna get real expensive in the next 10yrs.

That’s why I’ve been buying up as much raw beef as possible and hiding it under my mattress. Going to make a fortune in 2030, just wait

Does anybody have any?

With the drought hitting large chunks of the USA and other countries looks like it will be a bad harvest.

Lack of game preservation by companies in recent years (Nintendo just ignoring most of its backlog with the Switch, Sony getting a massive backlash for trying to pull the plug on the PS3 PSN store, which it seems like it won’t be the last time they attempt this considering they still went ahead and did that for the PSP despite the backlash), emulation still being stuck in a legal gray area that makes it easy for the sites hosting older games to be taken down, and disks/carts being destroyed due to neglect by owners, are all going to make the used game market insanely expensive.

If you have a local retro game store in your area, make sure to support them. They’re basically the only ones still making older games remotely affordable.

LM13700 operational transconductance amplifiers. They’re very useful little chips for guitar pedals and synthesizers, forming the basis for many classic voltage-controlled filters and voltage controlled amplifiers (and by extension, compressors). However, Texas Instruments announced the end of life of the LM13700 earlier this year. A few months from now, when retailers and suppliers have made and sold out of their last order, LM13700s are going to become very hard to find (and the price will increase accordingly).

I can sorta understand why they did it – OTAs in general have few applications outside of synths and guitar pedals, and commercial synths and pedals mostly use surface-mount components these days (which have a smaller form factor and can be easily assembled by machines, but are hard to solder by hand), so there isn’t much demand for a through-hole OTA anymore apart from DIY synth/pedal hobbyists. Maybe if we’re lucky, Alfa will launch a clone like they’ve done for discontinued synth chips in the past.

The next “healthy fad”.

Remember when aloé vera was in EVERYTHING?

Pretty sure the health industry is brewing the next it thing right now.

And açai berry- it was huge like 15 years ago or something.

It was in everything!

Honest answer, maybe honey, because of the death rate of bees.

As South African I am very concerned about food prices.

The recent events of looting destroyed a lot of the storage and distribution facilities for food.

Where I lived prices are still normal but there is rumours that in certain places the price of bread increased 200% this week alone.

I live in an area known for cheap land due to lack of economic opportunity.

They ran fiber internet and covid sent the cityfolk in, and its a new game now.

This really gave me some things to think about…

Did you agree with any of these? Disagree? Tell us what you think in the comments!