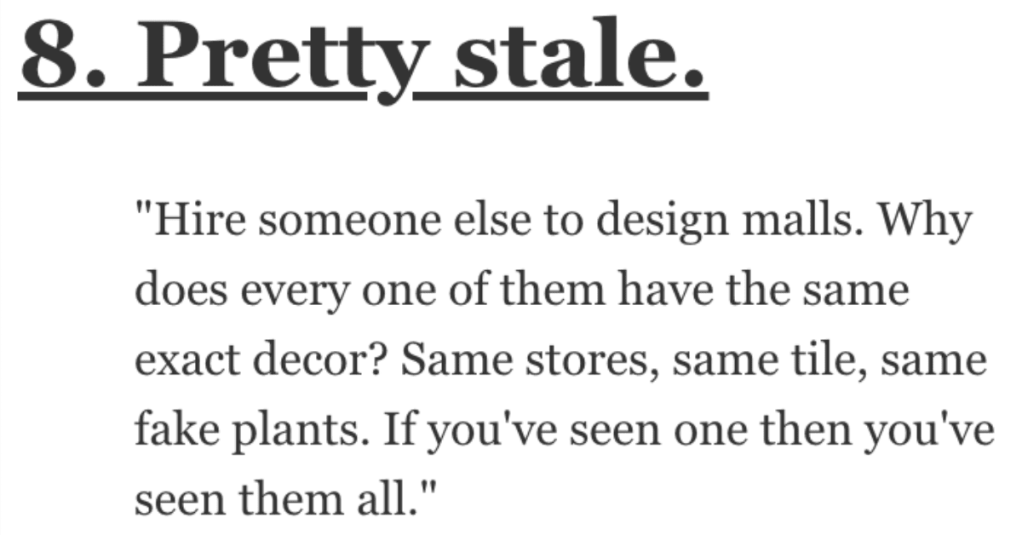 What Would It Take To Make Shopping Malls In America Cool Again? Here’s What People Said.

I miss the mall.

I spent a great deal of my childhood roaming my local shopping malls and it was a glorious time!

But those days seem to be fading as more and more malls close.

Folks on AskReddit talked about what they think it will take to make shopping malls in the U.S. cool again.

“Make them gathering places for activities and events that can’t be done online.

I would also love it if there was a place at the mall that would do personalized sizings. Like, I would pay $10 for a guy to tell me the exact dimensions I should look for when I purchase clothes online.”

2. Make it an experience.

“We want EXPERIENCES. Not more overpriced garbage that will end up in a landfill.

Every mall needs a giant, indoor park/playground as well as several gathering spaces for hosting whatever.

Build me an adult sized playground with a cafe next to it and I will throw my money at you.”

“An indoor playground where I can “door dash” any of the restaurants in the mall while my kids play?

Take all my money all winter long.”

Very little in the way of quirky/interesting businesses in malls these days.”

5. Some ideas to consider.

My own ideas include:

Transfer ownership from the capital investment companies that own most malls to community non-profits that take a more local approach.

Reposition malls as social gathering places for eating, concerts, festivals, and so forth.

Add variety to the stores within malls. If it’s all clothing shops, and you don’t care about fashion, then you’ll not be likely to go to a mall. But if there are lots of different kinds of stores, then more of the public has a reason to visit.

Figure out what today’s teens think is cool and pander to them a little bit, while also throwing a nod to their Millennial parents and their interests.

A lot of the burden rests not on malls but on businesses themselves, who, in the age of e-commerce, need to reinvent themselves. I can imagine businesses finding some success by, for example, hosting Twitch viewing parties and selling merch from people’s favorite streamers.

But I don’t know if that would be a viable business model, or just a short-term gimmick. I do think society needs more gathering places for people to come together…and malls are well-positioned to provide the space for it!”

“Malls used to be a hug for friend groups to hang out at on the weekends. That’s what probably made all the business for some stores.

I definitely think a community approach would be the best.

Make it the place people go to hang out. The way an art festival works. Except it’s always going on the weekends with new ideas every week or two. Have some live music, some art exhibits, some street food set up inside.

Have some escape rooms and all that. Some places inside just to sit and talk. Make some themed weekends. Stuff like that would work really well and is probably the best way to ever bring back malls.

Because a Macy’s and some expensive stores just doesn’t work out well for the demographics these days.”

“On the flip side, I live in small town with a “mall”. It’s small, maybe like 10 stores total (the biggest being a farm supply store). All but two stores are local small-businesses, which is great, but they’re mostly sort of bizarre.

I’d love a mall with some actually know clothing brands in them. The day Bath and Body decides to get the hell out of the mall I honestly doubt anyone will go. We have to drive an hour to get to a mall with any real clothing options.”

“Hire someone else to design malls.

Why does every one of them have the same exact decor? Same stores, same tile, same fake plants.

“Society has become a place of “buy your s**t and get outta my store!”, especially America. Malls were a place to hang out, socialize. They also had unique stores.

Everybody rags on Spencer’s, maybe that’s Yaunker’s to the rest of you? Some of the most successful stores I ever saw in a mall, second only to the clothing chains, were what I call Culture Shops. Japanese/Chinese/Asian we’re everywhere but why not make malls world shops?

The area I live in isn’t particularly diverse with the exception of foods. We have a pretty good foodie scene but I can’t buy anime. The only place to buy physical music is B&N and their selection is pretty sanitized. Gone are the game stores but maybe that has more to do with the model no longer working.

So let’s brainstorm a solution. Game store/arcade: I’m thinking Babbage’s meets Tilt. LAN stations, stand-ups, ticket monsters but sell games for tickets, like every 5000 tickets is a $5 off a physical game. Good regular prizes like Funko Pop! figures. And ffs put a laser tag arena in there!

And just to remind people that games aren’t just on TV or computers board games. We have a couple AMAZING tabletop shops but they get no advertising, they’re tucked in out of the way places and not enough parking.

Sam Goody/Suncoast: I worked for Media Play right before they went down. Ours was one of the stores that got changed to the garbage FYE. I think my generation screwed it up but we’re starting to see a resurgence of physical media. So redux to 2020s and I think we need a music/movie shop which also sells enthusiast electronics.

Good turntables, not those sh**ty Crosley vinyl eaters. Hi-res DAPs, great headphones and accessories. Movies but not just the top ten Anyone else have a problem with Best Buy only having ~30 titles? Partner with Amazon, don’t just try to beat them.

Online retailers: Make an internet retailer front end, a place where you can send your packages to where porch pirates can’t just walk up and walk off with your stuff. Hell, name it Porch Pirate’s Package Pickup and beat them at their own game. Let all the shippers deliver there.

Partner with Amazon and the like to pay the store for securely holding people’s packages. Then stock some of the most common purchases from online retailers that you can’t get at the corner store. No USB/Lightning cable nonsense.

Culture shops: In a time where culture is homogenizing there is still a lot of culture to be found in specific regions. I would love to have an Asian shop near me. Sell anime and swords and incense (looking at you Shoyeido) and freaking kimonos, whatever. I don’t have any ideas/examples for African but there has to be something. India has a s**tload of culture.

Europe is anchored by the UK, at least in the mind of the US, but there are way more countries there than states here with a far more diverse set of cultures. And as far as the US is concerned the Americas begin and end at our borders. Canada has more than just maple syrup and people who say “eh?” and South America doesn’t end at Mexico.

Food court: here’s your biggest diversity hook. We don’t need five pretzel stands and six Chinese Expresses. We need Piotr’s Pelmini, Anansi’s Alloco. Please don’t think I’m being racist, that’s not the intention. I’m thinking of the street carts which every country has. They sell some of the least healthy but most culturally identifiable food anywhere. Who hasn’t been to a taco truck in almost any US city or ramen cart in Shibuya who has actually been there?

And don’t make it expensive. Street Tacos are great in part because they’re cheap AF. With the import world the way it is now it shouldn’t cost $5 for dim sum.”

“I live in Los Angeles and our malls are getting more creative.

Like the Westfield near me has a Din-Tai-Fung restaurant, a fancy steakhouse, a Mexican restaurant, and a Dave and Busters in the same mall.

They also have shops that sell anime related stuff and a shop that sells Asian snacks. They also have all the standard mall businesses as well, so they’re always busy.”