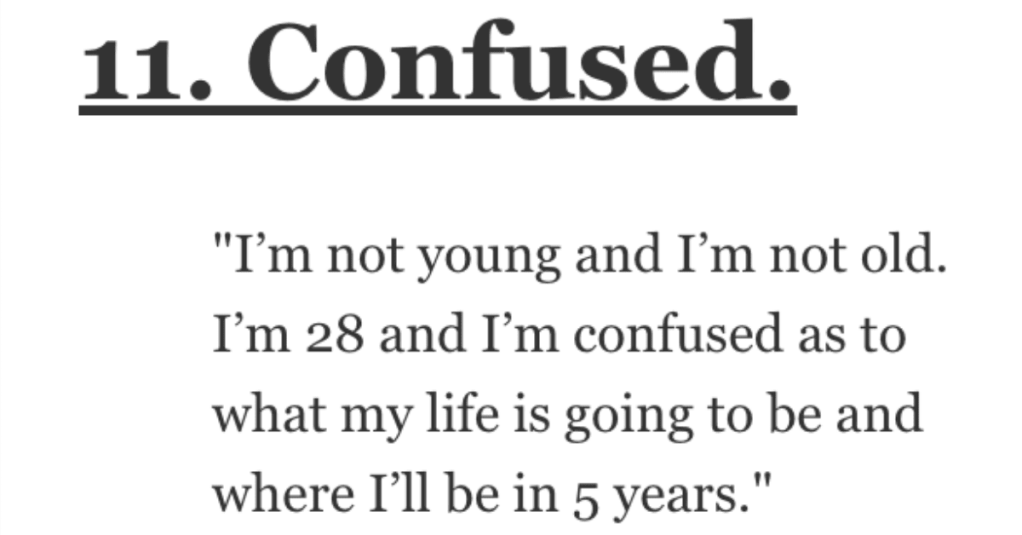 What’s Bad About Being Your Age? People Spoke Up.

The older I get, the more I try to enjoy each part of my life because each one is unique and has its own challenges and rewards.

But who am I kidding, there are some pretty annoying parts about every age…

Folks took to AskReddit to talk about what they don’t like about their age.

“I’m 25 so I’m the youngest person at my job and can’t really relate to anyone since I don’t have a house or kids, but I’m also too old to be going out and drinking/partying because I have to get up early the next day and just have lost interest in that sort of thing.”

“I just turned 40 and feel like life has gotten weird. Im old, but not OLD.

My kids have grown and gone, but most of my peers have toddlers/school age children. Body is starting to break down some, and I feel like I have to face my own mortality. And forget making new friends at this point.

Also kinda sucks: all of my peers are becoming more conservative while I become more progressive. So, that blows a lot.”

“I was a collegiate competitor in track and field, and while not elite by elite standards (best mile was 4:06) I was pretty d**n fast.

The thing that sucks about being my age is knowing that I will never be as fast as I was when I was 19.”

I’m a little burned out on work right now (I love my job, but it’s been an intense year), and desperately long for some extended time off to just go around and do my own thing. Also at this age I’m not old but I’m definitely not getting any younger. I’m now at the age by which important life decisions largely should have been made. I’ve made most of them… but not all.

I have bills to pay and am self supporting, so taking time off or leaving my job is not a viable option unless I win the lottery or something. But I still long for long slow days without all the rush.”

I will never make love with a pretty, young woman again.

People my age are getting cancer or ALS or Parkinson’s and/or dying.

Cataracts make it difficult to drive at night (it’s not bad enough yet for surgery).”

Nobody can see that you’re still young inside.”

“Almost 54. Used to be in AMAZING shape.

It’s harder to maintain. I’m always tired. Also, as a woman, I am invisible. I am not seen nor heard. I work in a really stressful consulting role and most of my coworkers are young men. I have to fight daily to be heard.

THAT said, there’s a ton of benefits too. I simply do NOT CARE what people think of me. It’s VERY liberating.”

“As a woman who will be 30 in a few weeks, I feel like I need to decide NOW whether I want to have kids (since it takes time to meet a partner, build a relationship, etc).

I wish fertility for women lasted longer. I’d like to have kids eventually but still want adventures, and feel these two sides of me can’t be reconciled.”

Most of the people that I have known are d**d. I was talking to a good high school friend and we both were going to call another friend when we were done, about a 90 minute call.

Five min after we hung up he called back to tell me that our friend had d**d whilst we were talking about calling him.”

I feel like people my age are either basically kids still living at home, get married and have kids or are in prison.

“Menopause, and it sucks!!

Luckily my symptoms are under control now!

Thank God, it felt like being a teenager again!”

I’ve deployed to Syria and Afghanistan, still can’t purchase al**hol or buy tobacco in my own country.”

“Starting to realize that some of the aches and pains I have now will be with me on the day I d**.”

“I’ve found I’m getting to the age that’s hard to keep in touch with friends.

I’m 33. It gets worse as you get older and your friends start having kids. Reach out to your friends as soon as you can and schedule time to see each other. I don’t have kids, but about half of my girlfriends do, and it’s so much harder to plan things when children and life in general are involved.

When we were in our 20s, we’d randomly plan trips together and they would happen within months. We can’t do that now because ____ is still breastfeeding and ____ has depleted her savings after buying a house, and is trying to be frugal. There’s a lot that I love about being in my 30s, but I also miss a lot of things about my 20s, and spontaneity and being able to see my friends more frequently are just a few of them.”

“Being 41 and realizing this went really fast.

Also its generally assumed you got it all figured out by this age. Still winging it baby.”

“I have acne, wrinkles, and grey hair at the same time.

Closing in on retirement though!”

“Watching the people around me become successful adults while I’m just sitting here, feeling like an absolute child.”

“Going to the concerts of younger musicians as a fan and realizing that you’re closer to the age of parents who are there for their kids, than kids/teens themselves.”

Realizing most of your friends from school probably sucked and you were only friends because of proximity.”

I was active, creative, hard working all the way up to my late 50’s, then got diabetes. Heart problems. So, I Retired at 63. I’ve lost family and friends.

Now, staying at home with my little dogs, watching “Doctor WHO”, and playing SIMS 4.”

“The road ahead of me is shorter than the road behind.

My brain still believes that my body can do certain things, but my body keeps on proving that my brain is living in the past.

The damage that I inflicted on my body being a competitive athlete is coming back to haunt me.”

“50. Knowing my life is more than half over.

Looking back at years that I squandered thinking there’s always time. I stayed with a woman I shouldn’t have. Boom! 7 years gone. After the divorce I drank away a few years. F**ked my career up a bit. Stalled it and now, at 50 I’m struggling again while my friends are talking early retirement.

I keep telling myself, “I have three wonderful kids. I got remarried to a woman who stuck by me getting sober. I’m doing what I love.” But it haunts me. I feel like I’m just going to tread water until something k*ls me eventually.

What do you not like about the age you’re at?