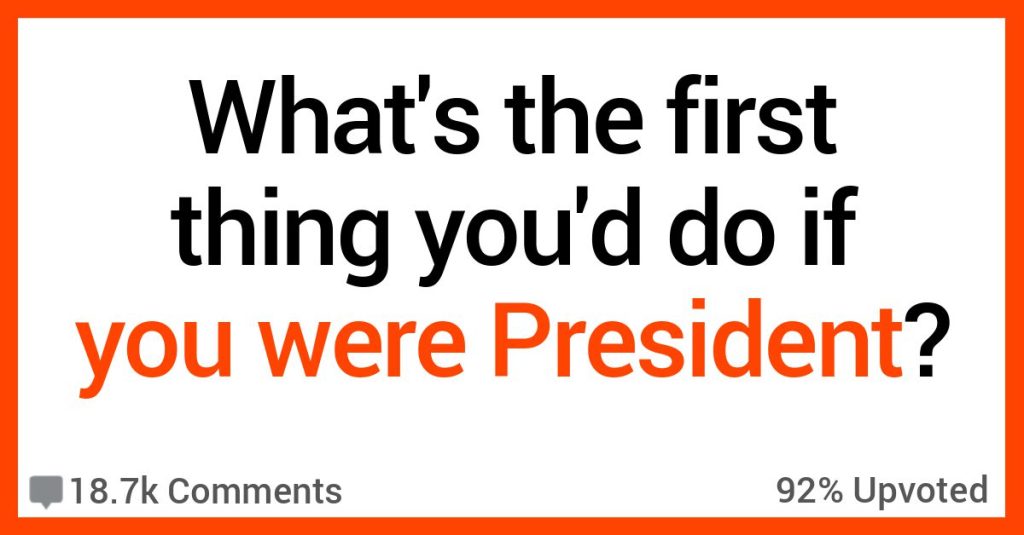 What’s the First Thing You’d Do if You Woke up as President? Here’s What 33 People Said.

What would you do if you woke up one day and you discovered you were the President of the United States?

That was the question posed to Redditors, and I’ve gotta say, very few people were interested in giving serious answers.

If there’s one common thread, it’s that no one actually wants to be President, and honestly, who could blame them!

Here are some funny, semi-serious, and almost practical responses.

Do what I usually do when I get up, look at my phone.

I would eat the Constitution, therefore I would have the ability to channel the power of the founding fathers.

Marvel at the epic bender I must have just been on, to not remember an entire political campaign.

As your attorney in the matter I advise you to keep quiet about that trip in Vegas.

I would take air force one to area 51. I want see what is really there.

“Nothing to see here boys. Just the invisible jet and a working Back to the Future hoverboard. Waste of a trip.”

6. It’ll probably be back by the time you get home.

Fix that pothole at the end of my block.

spray paint a dong in it and complain to the city/county.

The President of the United States, Kirby Bucketts, was filmed today painting male genitalia in a pothole. When asked why he did this, the president replied “it needed fixing”.

Our political correspondent is on the scene.

Thank you, Fluff. Shock came to this rural town earlier today when the President woke up from a nap and apparently had been living here for the last 20 years. When asked what his plans for his term were, President Bucketts replied “to fix this damn pothole”. He was later seen spray painting a bright yellow penis in the middle of the pothole.

Political analysts have been trying to interpret the president’s actions, but have yet to come to a solid conclusion. Many of his proponents are claiming that the pothole is in fact a metaphor for the poor economy, or corruption. When asked for clarification, however, the President said “it was just a pothole”.

The pothole currently has an armed guard due to vandalism as the local council try to work out what to do with it. Complaints from local mothers have already been made about the drawing asking for repaving to remove it, but as it is currently considered part of the president’s official brief on his first day in office, the council has announced they will not be taking any immediate action to fill it.
Back to you.

You know what, I’ll finally have health care so I’m treating myself to a doctors visit, dentist, and some therapy.

I can’t deal with that stress.

Maybe find out who the VP is first, I guess.

9. Some dreams are smaller than others.

“Secretary, hold all my calls” I’ve always wanted to say that.

Give away millions of peaches for free.

If I HAD MY LITTLE way, I’d eat peaches every day. Sun soakin bulges in the shaaaaaaaaaaaaade.

11. This is the realest of answers.

Hit the snooze button two or three times. Awake, dreading having to get up.

Sign executive order that presidents who resign from office get 2x the pension.

Kick back, relax, watch yourself go down in history as the less consequential president ever.

Learn all the top secret, most classified stuff.

Announce that scientology has lost its tax exempt status.

In Germany they’re not considered a religion. Even better, to start a PhD program at a university, I actually had to sign a document declaring that I’m not part of scientology and would not try to preach such ideas/recruit for them.

Btw I’m American myself, so please don’t kill the messenger/look to me for explanations.

Go pee. I almost always have to pee when I wake up.

I’d take a week to binge classified documents, then I would resign.

Maybe task my lackeys with giving me cliffs notes on it…though I guess they’d have to be cleared.

Whatever, there has to be a legal way to have somebody go through the documents and condense it for you.

I’d get up around 4AM and start tweeting stuff like “Lowest rated Oscars in HISTORY” and “Great, now I can go after Horseface and her 3rd rate lawyer in the Great State of Texas. She will confirm the letter she signed! She knows nothing about me, a total con!”

Smoke a J, cup of coffee, take a shit, rub one out….then start planning my zero-tolerance crackdown on spam callers.

“Alright we are going to need 15000 guillotines”

I would make the SEC do their job for once in their lives.

“Citizens of the United States of America. As the newly sworn president of this great land I have but one message for all people. In these trying times do not forget to like, comment, and subscribe. Ya boi Pres69 signing out. Peace! “

Go to the oral office.

Make insulin free for anyone that needs it. It’s ridiculous how much people have to pay.

Change my name to President Camacho and carry around machine guns.

Find out if we’ve had any contact with aliens.

What happened to Epstein.

Exactly how much does the government track its citizens.

Immediately get up and go have my chef prepared waffles and eggs benedict in the oval office in my undies. Send a fancy plane to get my granma and mom to come hang at the WH with me.

Go to war with nestle over their water rights and shit cause they’re just the worst.

You sit at your desk in the Oval Office tapping your foot impatiently. A man in a black suit and sunglasses enters the room and hands you a manilla envelope with “TOP SECRET” stamped on it.

“Finally!”, you exclaim in triumph.

You open the envelope with a wide grin. As you skim through the pages your grin fades, your eyes widen, and your jaw drops.

You look back at the man in black and say, “The American people cannot know the truth…”

“That is the correct answer, Mr. President.”, he calmly states.

“So… what would have happened if I’d had given the wrong answer?”, you ask.

“Refer to the section on Mr. Epstein.” He states as he walks away…

Take a big old dump on the front lawn. Just to to see what they would do. What could they do?

Instead of voting for a person – we vote for a panel or even for individuals to fill each job every cycle.

It wouldn’t be as fun but I think it would be more effective for progress.

Retail employees are now allowed to beat the crap out of the customers who are mean to them.

I’d spend one day a month working with the innocence project to pardon people that were likely wrongfully convicted yet failed to get a retrial.

Apart from that, I know enough to know that most people overestimate the actual power of the executive branch, but my expertise isn’t really in politics or policy.

I’d probably spend time making sure I had a competent cabinet and group of advisors to get me up to speed.

First thing that I’m gonna do is disclose all those U.F.O.s, put Jimi Hendrix on the 20 dollar bill, and Bill Hicks on a five note.

The Democratic process. What a time to be alive.

Resign and let someone qualified have the job.

I have no idea what I would do but I think “panic” would be part of it.

How would you answer this question? Tell us in the comments!