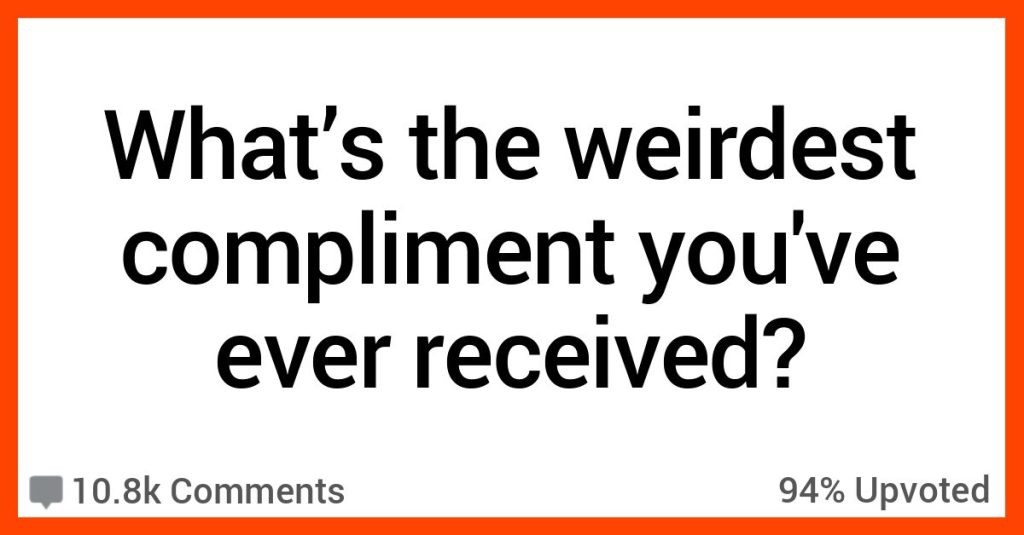 What’s the Weirdest Compliment Someone Ever Gave You? People Shared Their Stories.

Compliments are designed to make us all feel good. Except when they make us feel…weird.

What’s the weirdest compliment you ever received? from AskReddit

Here are some odd ones that stuck with the people of Reddit.

Many years ago, I had a man corner me with his grocery cart at the store, so he could tell me I “looked like a bacon and egg sandwich,” and “good enough to eat.”

He then asked if I had a bf, which I said I did, and he replied “how long have you had that problem?”

Apparently he was into calling women snacks before that was a thing, lol.

A d**nk old sailor once told me the shape of the top of my upper lip was very nice.

Very specific and very odd. He was nice though, gave me some (unsolicited but true) life advice as well.

I was told that I had a the healthiest a** the person speaking had ever seen on a white woman.

And yes, I know what he meant by that.

I have a big butt.

And he meant it as a compliment.

I went on a trip to Honduras.

I am a fairly large gal.

I had a man offer to pay my father two goats and a cow if I would marry his son.

Any men I date now are gonna have to bring it hard.

From a child. “Mermaid with legs! Nice!”

And then he high fived me before walking away.

I was cashiering and had waist length teal hair at the time.

I was 16 watching movies with a guy when out of nowhere he turned to me and said “you’re more than one standard deviation hotter than the average person” with such certainty I felt like he had just finished doing the math in his head.

Still makes me smile to this day.

That I have a very swan-like voice.

She was complimenting me on how I said “your coffee will be ready over there” when we were both working at a coffee shop.

An older woman said I had nice skin (I’m a dude if it matters.)

It came across as a “I’d like to wear it,” but then later that evening I realized the party I was invited to was actually a sales pitch to join some pyramid scam to sell skin products.

So it was less weird in retrospect, but clearly something had gone wrong.

I was at a pool party in college and I saw two girls that looked like they were talking about me.

Sadly I didn’t get either of their numbers but at least now I know that I have nice nipples.

An ex once picked up my hand and told me I had “feminine, delicate wrists”

Also “you’re so… unique looking!” multiple times during my life.

I am a white brunette lady, I am not unique looking, just not conventionally attractive.

I once had an old Hispanic lady that didn’t speak English who I didn’t know have someone she was with come over to me at a restaurant and ask if she could bless my eyes for me.

She said she wanted to bless them so nothing would ever happen to them because she’d never seen anything like them.

One time another guy at the gym who was using an adjacent locker caught up to me on the way out to tell me I had nice feet.

He said that he “notices things like that” and that I must take care of them.

I said thanks. He was nice. Never saw him again.

I was late for school and decided not to shower so i could catch my bus in time.

I arrive to school say hello to a girl I barely knew, she comes up to me smells my sweaty shirt and says “D**mn you smell really good”.

Yeah that was a creepy way to start the day.

In high school, some girls told me I had a cute walk.

I had never thought about how I walked before but it really f**ked me up for a while– trying to make I maintained that “cuteness,” whatever it was.

And realizing that “oh, I could be minding my own business and someone still find me attractive… or unattractive.”

A random woman outside a café beside a train station, as I get chased by a wasp:

“You smell very sweet and spicy, that’s why he’s chasing you. Its very nice!”

I was told by a random lady walking past me in the mall that I had a really large, bright aura.

“You look you’d be fun to take to Colorado” said the man to me, in a gas station.

He liked my choice of beer. I’m just broke and PBR isn’t that bad

I went to Mexico with a buddy about 10 years ago and we were drinking with a bunch of people. Well another group of people were standing near us and kept looking over and whispering to each other, staring at us until finally a few of them approached us.

The one guy looks at me and says “are your calves real?” I was like ughhhhh yeah.. they’re real, he turns to his friends and yells “they’re real!” They all proceed to walk over and talk to us. A group of maybe 10 people complimented me on my calves, it was very weird.

Alternatively, while doing CPR on an inmate, a nurse showed up to relieve me and before doing so said, “ you look like you’re good with your hands. How else do you use them?”

My first child had been born a few weeks ago.

I came back to work and one of the bosses said, “Oh, congratulations on your….on your news…yeah…good luck with that.”

“I like your little hat” – a girl working the Whole Foods Checkout.

I was having a socially awkward day and she was a bit awkward too. I think she found something endearing in how I was being and felt compelled to say something nice to me.

It was just a basic wool hat/beanie for winter, not even that little. I still appreciated it and she was kinda cute.

Obligatory not me, but during a high school spring trip to NYC, someone told my classmate (in red top and pants) she looked like a s**y bottle of ketchup.

Secondly, while picking up after a city festival around 2 AM a guy came d**nk out of a bar and yelled to the group of us “Hey trash girls, you can pick me up.”

I worked at a restaurant when I was 17 and a man came up to me and asked me if I could talk to this boy he had with him.

He told me that the boy thought I was the most beautiful girl he’d ever seen and that I needed to talk to him because he was training for a boxing match and he needed to be free from distractions.

In short, his logic was, I needed to go over and talk to the young man so that he wouldn’t be thinking about me during his boxing training. It was very strange.

An older gentleman I regularly walk by on my way to work and have never exchanged words with randomly said to me one day “I don’t know whether you want to beat me up or kill me, but you look at me with those beady little eyes and it’s scary. But you are a sweetheart I love you, I do” and honestly, as a petite young lady who tries to look intimidating as I walk alone, my day was made.

I work as a barista at Starbucks and I have some interesting stories. One time this guy came in and ordered a Carmel Frappe.

I asked him if that was all for him and he said, “Yes, unless I can get a Trenta of you with my order.”

Now I’m very easily flustered so I immediately started blushing and he looked me right in my eyes and said, “You look beautiful with a blush across your face. It looks like a rose that was flattened by a car.”

Now I’m no flirt master, but I don’t think that’s how you get a girl.

Someone new started up at my work a while ago. The first thing she says to me is – “You’re so pretty, I love pregnant women!”

To which I responded in the most blunt way possible – “oh yeah I’m loving it. I’m about 15 months along now!”

The person walked away. The next day our manager said she quit

Had a girl tell me “you have an a** that makes me want to eat cheesecake off it” at a party.

Just walked up and turned me around to say it……stunned so much I just stood and was speechless for a few min.

A 5-year-old boy walked up to my boyfriend at my nephew’s birthday party and said, “you look evil, but I think that’s cool”.

I was ringing up a customer when I worked in retail. She asked if anyone had ever told me that I had really beautiful COW EYES. I said, “…what?”. She told me that cows have the most beautiful eyes in the animal kingdom and that my eyes are exactly like that.

My bf said everyday the more he looked at me the more he was reminded of my mum. Especially my a**. He said we had the same a**. In a good way.

There are some real strange folks out there.