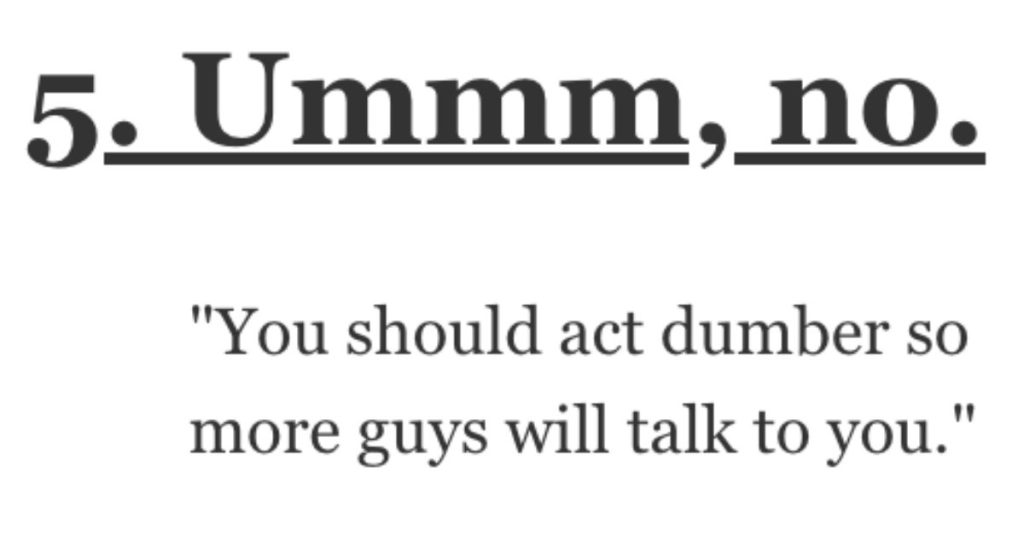 People sure do like to throw around terrible advice, huh?

You know it! It’s everywhere out there!

So you gotta be smart about who you listen to, ya hear me?

AskReddit users talked about the worst advice they’ve ever received.

“”Ignore your bullies and they will ignore you.”

They, in fact, did not ignore me.”

“Go on and get married.

What’s the worst thing that can happen?

You are overreacting, they will change. “

““Try to think of happier things when you hallucinate.”

Yeah.. let me just think of a unicorn, I can totally control schizophrenia. That’ll help me not see the blurry faceless man following me in the hallway.

Maybe I won’t be so paranoid. That how that works, right? Happy away the illness.”

“I scraped someone’s truck in our apartment complex a few weeks after I first got my license at 18, in my defense he was very over the lines and it was the only available spot.

Called my dad in a panic because I didn’t know what to do, he told me to go park in the lot of the apartments next to us and just pretend nothing happened unless someone confronts me. New and inexperienced, I listened.

Horrible advice, someone saw it and the guy found which apartment I was in. He was pi**ed but more understanding when he realized I was just a kid (to a guy In his 40s I guess 18 is a kid) and explained what happened. We worked insurance stuff out and I learned to never take my dad’s advice.”

“You should act dumber so more guys will talk to you.”

“My cousin told me when I was young to just barely meet everyone’s expectations for anything, and then they won’t expect anything from you and you can just coast.”

“”Don’t join that Karate school, because all the kids who were there longer than you will always be better than you, so there’s no point in trying,”

It turned out that I was the only one that actually stayed. I’m probably better at it than all of them now, and even became an assistant teacher before I was 25.”

“Smile in your mugshot, because it’s a picture that’s gonna be out there forever.

This can and will be used against you in a court of law.

Prosecution: “Exhibit A. The defendant’s mugshot. This person is smiling. Does this look like the face of someone who is sorry? Someone who is remorseful? No.

They are smiling despite the fact that they could have injured someone or worse. That is why we are seeking the maximum penalty. To show them that this is not something to be smiling about.””

“Don’t worry about taking student loans, you’ll get a great job and can pay them off easy…

My plumber makes double what I do.”

“I once got bit by an aggressive stray dog.

Later that day, while talking to a buddy of mine, I was complaining that I needed to go take anti-rabies shots, just to be safe.

He said that I probably shouldn’t bother with doctors unless I started getting symptoms.”

“Any dating advice from serial daters.

Serial daters always seem to think they have the best advice due to their extensive “experience,” when in reality, unless your goal is also to serially date and never actually find a LTR, they only have a lot of “experience” because they continue to fail over and over again…”

“”You should let it pinch you, it won’t hurt that much…”

It was the biggest crawdad I ever saw and I was maybe like 10 fishing with my Dad. He didn’t think I would be stupid enough to do it, but I wanted to impress him.

The chaos that then ensued; I picked it up and let it pinch the soft skin between my thumb and hand promptly scream in pain, Dad laughing his a** off tried to help just to be pinched by the other claw on the back of his hand.

This cycle of continuous pinching continues as we stupidity try to help one another then finally we get it removed and my Dad says to body slam it so I throw it as hard as I can back into the lake.”

What’s the worst advice you ever received?