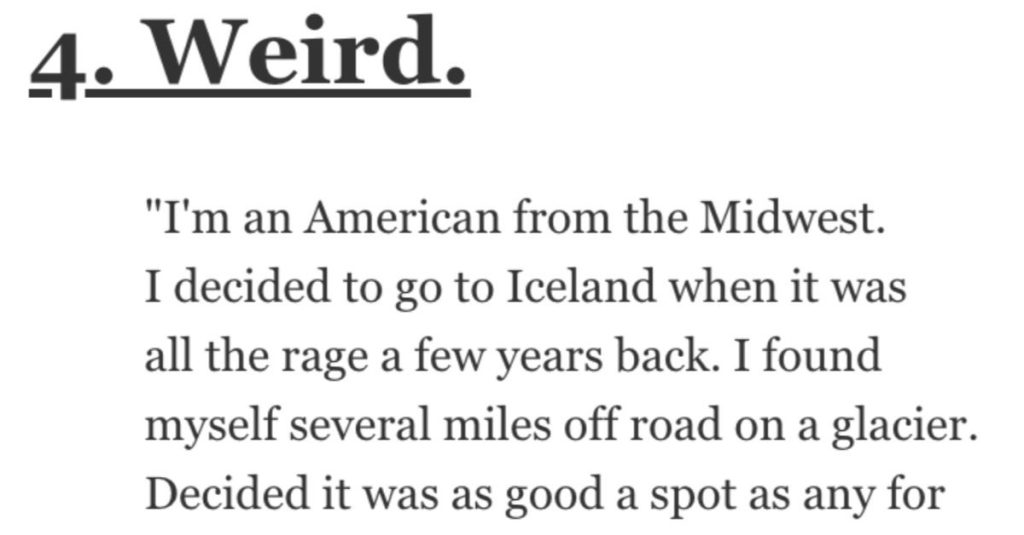 What’s Your Wildest Story That Sounds Made Up? Here’s What People Said.

Have you ever told a story that was true and people didn’t believe you because they thought it sounded too outrageous and wild?

And today we’re going to hear wild but TRUE stories from folks on AskReddit.

“I was walking around Downtown Cincinnati one afternoon, and I saw two blind guys who didn’t even know each other, bump into each other on the sidewalk.

Both apologized profusely, then they went on their way. Neither knowing the other was blind.

Both were rocking the red tipped cane and dark glasses and everything. No dogs though.”

“An old girlfriend and I went on a hot air balloon ride at a balloon festival about 20 years ago. The way this works is you go up in the balloon, the wind carries you away, someone drives a chase car (usually a van of some sort) to fetch you when the balloon comes down.

We came down in this beautiful manicured field that happened to be part of a national lab where Manhattan Project work and early research in radioisotopes was conducted.

The field was contaminated and we had to go through the facilities decon procedures which involved stripping naked and bathing with special cleansers and going through a whole body detector.”

“I worked in northern Canada.

I went to get a job estimate signed and the guy signing it let his little Yorkshire terrier out side to go to the bathroom. He’s going over the details of the paperwork and I’m watching this little dog sniff around outside.

He looks up for a second and we both watched a bald eagle grab this dog and fly off. It happened in a second and his jaw dropped. It was hard to ask him to sign the paperwork so I could leave.”

“I’m an American from the Midwest.

I decided to go to Iceland when it was all the rage a few years back. I found myself several miles off road on a glacier.

Decided it was as good a spot as any for lunch. Sit down on a rock and start eating a sandwich. Two hikers comes up the trail. We say hi, they sound American too. Ask where they’re from. They tell me.

“Oh that’s cool, my sister lives there. She works at business.”

The female hiker gives me a funny look.

“Is your sister so-and-so?”

When I would come in from a surf, I had the habit of undoing my leash from my leg while I was walking in the shallow water. Unbeknownst to me, the other side of the leash that connects to the board had come off. I lost my leash. I searched around the tidal zone but no luck. I was bummed but I just moved on.

Three weeks later, I was surfing in Ventura county, and as I was walking in from the surf, a piece of kelp wrapped around my leg. I reached down to pull it off. It wasn’t kelp, it was my leash I’d lost a dozen miles north a few weeks back. It had algae and stuff growing on it, but no mistaking it was absolutely my leash.”

“I went to the Bahamas one time with friends and was drinking at a Senor Frog’s.

I look to my right and suddenly my sister and I make eye contact and gasp.

We ended up at the same bar at the same time on separate trips and not even knowing where each other were going.”

“When I was 18 I walked across 3 states and hitchhiked another 2 just to kick a c**aine addiction.

Went to rehab. Been clean from c**aine for almost 20 years now.”

“Two weeks in Hawaii on vacation. Last day of the trip.

Decide to visit the waterfall where Tattoo from Fantasy Island yells “Da plane, da plane.” Hear someone call my name, it was a friend of mine who had dated my best friend Rich in high school. Rich committed s**cide some years after high school.

We get to chatting and all of of sudden she gets quiet and serious and says, “Do you realize it’s Rich’s birthday today?”

“In high school one of my classmates d**d in a car accident after he got t-boned at an intersection. He was 16.

I keep on driving to a call about 30 miles away. Nowhere close to the intersection I was at. Clear up the call and keep patrolling. See a car driving with no taillights. Get behind it and pull it over.

Get the driver’s license and look at the name and address-it’s the father of my classmate who d**d.”

“I went river tubing down a 4 Km stretch of glacial river in rural British Columbia. Somewhere over that 4K, I lost my cell phone. I don’t love having a cell phone, so I was putting off replacing it.

After 9 days of no cell phone, my husband gently indicated it was time for me to go get a new one. I jokingly told him, “I don’t need to. I have a really good feeling it’s going to come back to me.”

20 minutes later, the “find my iPhone” notification appeared on his cell phone, and we got a call saying that a lady’s son found my phone after he had fallen out of his tube and stepped directly on my phone. After realizing it didn’t feel like a river rock, he reached down and picked my phone up. It was in a LifeProof case.

They took it home and charged it, and now I’m writing this story on said phone.”

“My uncle and I were driving in NYC and we almost hit this dude.

My uncle slams on his breaks and the dude was expecting to get hit and I mean by the smallest of margins. It was Dan Aykroyd.

He called us motherf**kers. It was an honor to get cursed out by a Ghostbuster.”

12. Get this thing outta here!

“I bought something on Craigslist that contained a huge boa constrictor. I unpacked my purchase when I got home and I didn’t see it crawl out.

But all the sudden that motherf**ker gave me a jump. I called the guy guy and he was like “oh s**t! She’s been missing for months! Can you bring her back?” No, dude. Get your a** over here and get this f**king thing outta here.”

Now we want to hear from you in the comments.