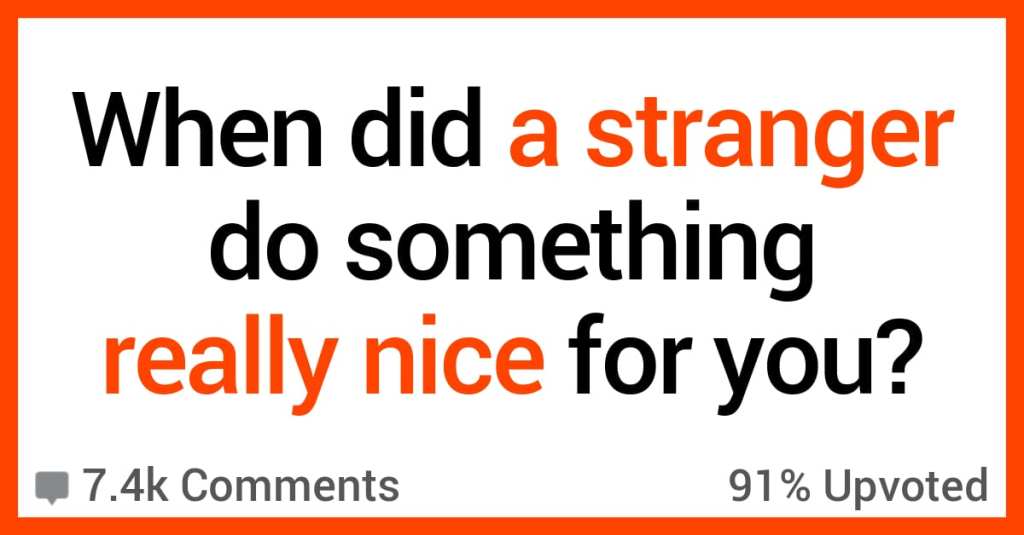 When Did a Stranger Do Something Nice for You? Here’s What People Said.

Sure, most of the time all we see is doom, gloom, blood, and guts, but when you look below the surface, most people out there, regardless of what they look like, how they worship, or their political beliefs, are good folks who are glad to lend a helping hand to anyone, including strangers.

So let these stories from AskReddit users inspire you to do better and to help out your fellow humans when they need it. Let’s take a look.

After I accepted that I couldn’t buy it, we looked at necklaces. While we were doing so, a man walked up and handed me the $10 toy with a receipt. I said, “Oh, That’s not mine.”

But he insisted I take it. After a moment, I realized that he bought it for me! His wife said that he does these things all the time.”

“A really small thing, but I hope I remember it forever…

My son was probably 2 or 3 and we went to the mall for some reason. My son liked looking at displays and stuff. Well there was a model train set in a case that you could put a $1 in and watch them go around for a while. I was pretty broke If I recall and never had cash on me regardless.

He was content just looking at the display. A group of loud mall teens come through and go past. One of them comes back and puts a dollar in the machine and says “I always liked watching trains too” then hurries off back to his friends.

My son lit up. I never would have expected that action from a stranger, let alone a teen with his friends in a mall.”

“My first wife abandoned us when my son was an infant. It was rough but I survived.

One evening I was at dinner with some friends. I had to change the baby, there was no table in the men’s room. I asked a lady leaving the ladies room if it was empty and she checked for me, gave me the okay. While I was trying to get my diaper bag sorted she came up and offered to change him.

I told her I had it but she insisted, and put her arm around me. Apparently I’d been holding in a breakdown the whole time and she saw right through it. I cried for a minute while a total stranger changed my infant son, thanked her profusely, and went back to dinner with my friends carrying a little less weight on my shoulders.

No clue who she was, but she was an angel to me that night.”

“My flight out of Syracuse was cancelled and when I finally made it to the front desk they told me it would be two days before I could get home. I decided I’d rent a car and drive to NYC to catch a flight out of one of the airports.

As I was getting to the counter a woman, who’s flight had also been cancelled, announced she was driving to NYC and welcomed anyone to join her. On an impulse I said yes and we started the journey to NYC.

She turned out to be one of the kindest people I’ve ever met. While calling AA to figure out my next situation, the customer service person was incredibly rude and refused to do anything – eventually hanging up on me.

Seeing I was frustrated/upset this wonderful woman proceeded to call customer service agents over the next two hours. I would explain my situation and she would pretend to be my mother and ask for a solution. Ended up getting fully refunded and booked on another flight the next morning.

I was planning on just sleeping in JFK until my flight but she offered her couch in her apartment and a hot shower. I refused at first, but the prospect of a hot shower after such a stressful day was too much for me to pass up. On the way to her apartment she even asked the cab driver to go a little out the way to swing by some famous sites in NYC because I’d never been.

I still think about her often and wonder if she realizes how big of an impact her kindness had on me.”

“I was at a bar with my then-girlfriend. Seated next to us was an older gentleman who was alone and looking forlorn.

After a time, he tapped my girlfriend on the shoulder and said, “I like the way you two talk to one another. Here’s what I’m going to do – I spent a fortune on these tickets for my wife. Unfortunately, she can’t go anymore, and I just don’t feel like going without her. So I’d like you two to have them. The only catch is that the concert starts in twenty minutes.”

He didn’t elaborate, nor would he accept payment. He asked only that we go, enjoy ourselves, and keep being good to each other. He paid his tab and left.

And that’s how I got front row seats to Prince.”

“I’m a bit of a city mouse, but I spent a summer in the country with relatives as a teenager. Very rural, with miles between some houses.

I love long walks and one sunny day I decided to take a very nice one. There was this big road that led around the area in a circle. Looked like a good couple of hours of strolling.

This was before smartphones, so I couldn’t gauge the distance perfectly, but I was convinced I could handle it. Grabbed a soda and a freshly charged mp3 player and set out in the afternoon, convinced I would be back by dinner.

I had made a bad misjudgment of scale. After several hours of walking I was nowhere near home. My phone had no signal (dumb*ss city slicker me hadn’t even considered that), there were no streetlights, and no cars. It was getting dark and I could barely see the road beneath my feet. Chances of a Leatherface attack had gone up about 1000%.

Houses were extremely far apart too. I passed one and knocked on the door, but no one was home. I seriously debated going to sleep on their porch and hoping someone would eventually turn up, but in the end I kept walking.

Finally I found a house with a light on. I banged on the door, and a middle aged woman answered. The first words out of her mouth were to straight up ask if I was there to rob her. Refreshingly direct, really. I assured her I was harmless and explained my situation.

Her demeanor flipped 100% from suspicious to charitable. I had just hoped to use her phone, but she insisted on driving me home herself, and also on feeding me.

The route she took continued around the loop and I realized A) I had barely made it halfway and B) hers was the last house for a very long while, and things got a lot more woodsy after that. If she hadn’t helped me I would have been walking all night through the woods.”

“Was out clubbing and dropped my house keys.

Next day, get a letter in my mailbox with a guys phone number. I text him, turns out he found my keys in the club, recognized the building they belong to (student housing), came to the building and tried the keys on every single mailbox until he found the right one.

Then gave them back to me. Nicest guy ever, glad he didn’t rob me instead

“I once got on a train late at night. I was going from start to end of the line to change which was nearly an hour journey. When I got on the train there were two other people.

One young man and a much older, grumpy looking man. After the second stop the young man became aggressive toward me for rejecting him and was trying to pull me off the train to do god knows what to me and the old man helped me get him off the train and away from me.

After I’d thanked him and he calmed me down (I was very upset), he sat down in the row behind me and looked out of the window.

When I got off he did too, he waited on the same platform as me just further down from me so I assumed he was waiting for the same connection. He wasnt. Train comes and I get on. I see him stand up, wave, and walk to the stairs to get back to the platforms going the other way.

That man had missed his stop, waited on the wrong platform, and then went right on back all while saying nothing just to make sure I was okay.

I think about that man often. I wish I could thank him for that.”

“My birthday one year was really sucking. I decided to go buy myself a cake at the grocery store and get it decorated, because it was my birthday and I wanted something nice.

When the guy at the counter asked who it was for (in retrospect he meant what name to put on it) and I said it was for me, he was incredulous that I had to buy my own birthday cake. I just kind of shrugged and went out to finish shopping for groceries. He said my cake would be need to be paid for at pick up.

When I came back to pay for and pick up my cake, a different person was at the register and she said my cake had been paid for. It was also decorated a bit more than I thought it should have been. I have not seen that guy working there since and in my head I’ve called him the cake fairy.

“I was struggling to carry all my books after I got off the bus and they didn’t fit in my bag since I already had four other textbooks in my bag.

I couldn’t get on my bike so a lady ran out of her house and gave me a bag and I almost cried because that was the nicest thing a stranger has done for me.”

“In Paris, the Metro is not wheelchair-friendly.

We got stuck once because the accessible station was closed and we were diverted elsewhere. Two guys walked up, picked up my MIL in her chair, carried her up a flight, through the turnstile, and down a flight to the platform.

Quick as you please, and they wanted nothing more than thanks. I don’t think they even knew each other.”

“I was on the bus freaking out about how I was going to feed my fiancee and I as I was the only person working a 100% commission job.

A stranger heard me on the phone freaking out on the verge of tears and politely alerted me I had “dropped” some money. It was 40 dollars and me my fiancee used every penny.

I never got to thank them but I quit that job I think a week or so later and found something way more stable.”

In the comments, please tell us about your own experiences with strangers helping you out.