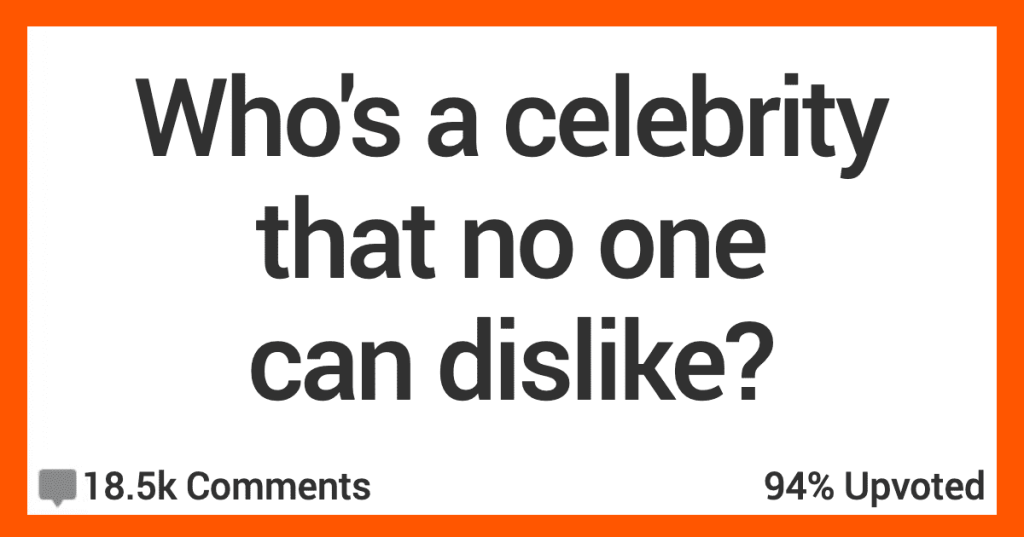 Who’s a Celebrity No One Can Dislike? Here’s What People Said.

I know my answer to this question…

Are you ready for it…?

But that’s just my opinion.

During 9/11 the man went down to his old firehouse and volunteered.

Dude went through hell both physically & emotionally from back injuries & being s**ually violated and is finally coming back to Hollywood.

Dude is as friendly and humble as he ever was and I wish him the best.”

I’ve met her, had a cup of tea with her in her house. Every bit as charming and as personable as you could ever imagine.

The definition of a class act.”

Fought in WWII, played Dracula, a wizard, a Sith Lord, and many other roles.

He also was in a metal band.”

The warmth, love, and honesty he brought to all of his roles was second to none.

If I d** and go to heaven, it will be walking into a warm bar on a cold day and John turns to me with that big smile and offers me a beer and a seat next to him.

I never see anyone talking any s**t about her.

She’s renowned for her acting and her personality, all things considered.”

I mean, the guy literally gave up his acting career to be a full time Stay-At-Home Dad when his wife d**d…”

Great actor, host of a treasured children’s show, and never involved in any kind of drama from what I can remember.”

Anyone in Pittsburgh will beat your a** for saying something negative about Fred Rogers.

I’ve never heard a bad word about him, he plays really quirky parts, and my stepdad went to high school with him.”

Dolly has an amazing sense of humor and is so approachable and kind. When there was a fire in pigeon forge TN and many were displaced she gave families money for a certain amount of time.

It didn’t seem like much per family but in rural TN esp in the residential areas there’s a lot of poverty so prices aren’t as high there. Also she is unafraid to advocate for so many causes and groups. She is a DOLL.

She’s part of TN that I’m not ashamed of. She will definitely speak to you if you ever meet her. Love her! I’ve said it already but her humor is the best.”

“Henry Winkler is maybe the name I hear the most often when other actors are talking about the “nicest celebrity”.”

He was at Comicon and the room adored him.

Everything I’ve read or heard talking about him is positive.”