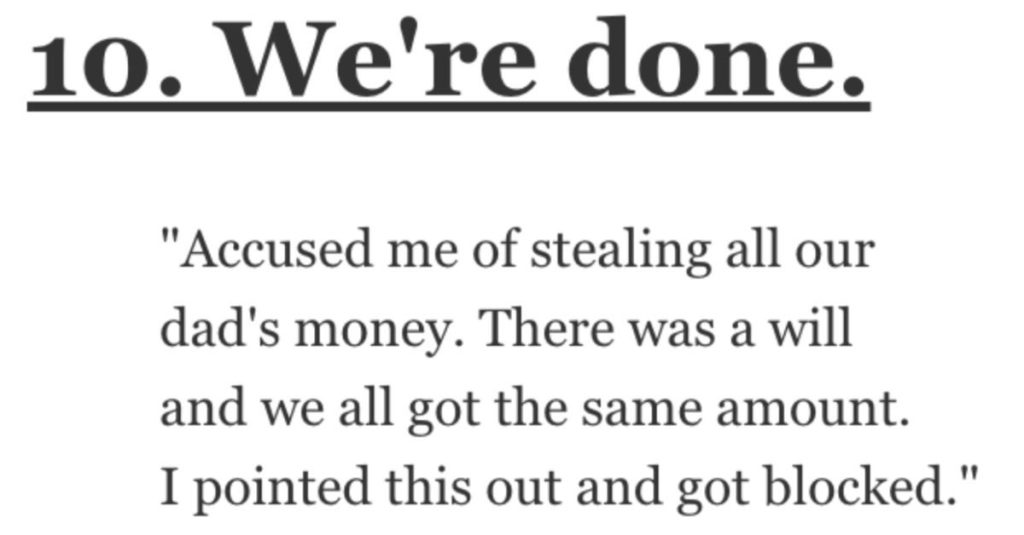 Why Do You Not Talk to Someone in Your Family Anymore? People Shared Their Stories.

It’s a tough thing when it happens, but sometimes it’s necessary.

I’m talking about cutting off all contact with someone in your family.

We hear stories about it all the time because it’s actually pretty common.

And these AskReddit users opened up about their stories.

“Stole our grandpa’s identity (his dad) and ruined him financially.

Then when his brother d**d, tried stealing money from his sister (my mom) and conning his way into things that didn’t belong to him.

When my mom passed, he asked for her SSN, told me it was for an old insurance policy their brother (referenced above) worth like 400 bucks.

I told him I wanted more info, looked into it and it was 76k that he was trying to claim entirely for himself instead of me and my sibling getting my moms share.

“Uncle punched me in the neck for no reason while drunk.

Cut his a** off that same night.

On Christmas at that…”

“I recently decided I’m done with my sister. It’s sad and I don’t feel great about it, but she is a cyclical addict who has had more chances than I can count to stay sober.

The real shift is that now she is lying to me (she used to confide) and I have a child who unfortunately I just don’t want around that life. She is a spoiled brat narcissist who is as addicted to being taken care of as she is to alcohol and after 40 years of dealing with her, I am just burned out.

Maybe I’ll soften at some point, maybe she’ll make an effort and get sober again, but for the moment I am done.”

“I supported my 46 year old son all his adult life. Through raising 2 of his children. I was spending to much money and I was going broke myself.

When he wanted to move in with his girlfriend I said no more and that he had to stand up for themselves.

Of course I was a freaking b**ch and haven’t seen or heard from him for over a year. He hasn’t even checked on his kids. Not birthdays or Christmas.”

“My brother turned me in for social security fraud. Needless to say I’m not committing any fraud.

“She’s a lying, manipulative, attention seeker but she’s the youngest so it’s okay.

She tried to f**k me over every opportunity she got when we were younger. Guess who asks me for money all the time.”

“I had to call CPS on his neglectful parenting.

“She used my wedding (destination wedding) to meet up with some dude half her age that she could cheat on her husband with. To top it all off, did not say a single word to my now wife at the wedding.

Another trip, she wanted to have her 15 year old nephew fend for himself, rather than wait with him to have a proper way of getting home.”

“My son got cancer and not a single one of them on either side (except for my dad) helped in any way.

I’m not talking money. No one called my son. Came to see him when he was in the hospital. Sent him a video game to play. Nothing. How about giving me a break? Nope? Too busy. He was sick for three YEARS.

They all called when he d**d. I never called any of them back. We had a private service. They don’t understand why I won’t talk to them.

“Accused me of stealing all our dad’s money.

There was a will and we all got the same amount.

I pointed this out and got blocked.”

“It was after a Christmas party.

My mother manages a small hotel with rooms and two chalets. So she booked rooms for the family to sleep over after the party. One of my cousins took a chalet with her BF. It was only for one night, regular customers were coming the next day.

All the family leave early the next day and so did my cousin. Customers who booked the chalet arrived early, so my mother show them the chalet, assuming that the chalet will be clean enough and that the customers could leave their luggage there til the bed was made.

“My husband d**d and I asked my entire family if they could help me out by watching my youngest while I worked a night shift.

Every single one of them said no.”