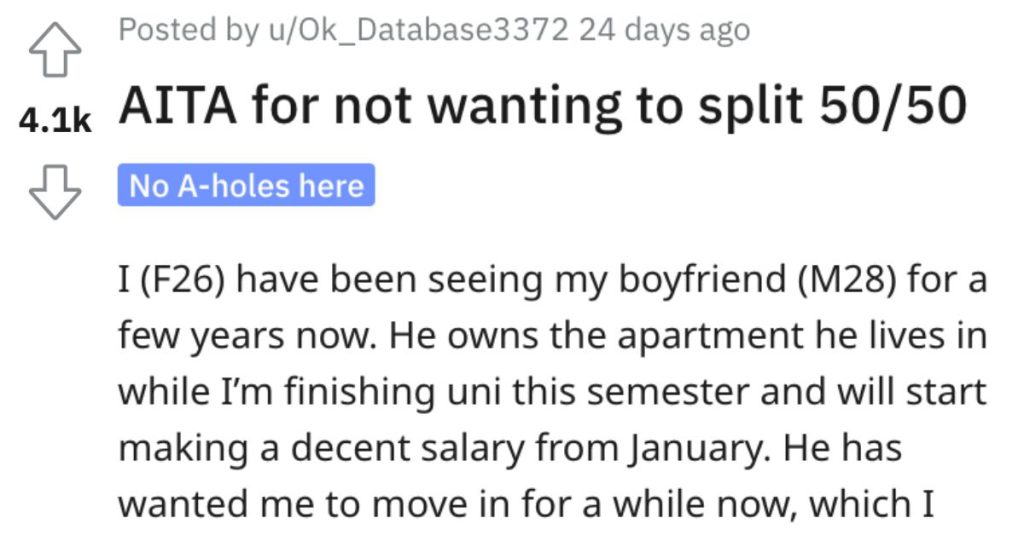 Uh oh…it’s another story from Reddit’s “Am I the A**hole?” page about complications with finances between two folks in a relationship…

It’s a story as old as time itself, folks…

Check out this story and see what’s going on here…

He owns the apartment he lives in while I’m finishing uni this semester and will start making a decent salary from January. He has wanted me to move in for a while now, which I would be excited to do, but we have some differences in opinions that we have a hard time settling on.

He wants to split costs (his monthly mortgage downpayments plus bills and groceries etc) 50/50 as we will be making around the same amount. I don’t agree with this as it is his apartment, and by default I will be paying down his mortgage and will be left with nothing if we break up, while he will have his house and interest from its rise in value.

I proposed that I can pay 50/50 of all expenses as well as half of the interest rate, but not contribute to the mortgage payment of his loan. This way I can put the rest of money into savings so when my savings are big enough we can go in on an apartment together that will be in interest for the both of us (or I can buy a share into his existing apartment).

He thinks it’s unreasonable that we wouldn’t pay the same monthly expenses when we both make the same and that I am focusing too much on what is mine and what is his.

He has made small digs, hinting that I am trying to leech off of his investments by getting a cheaper place to live – which I don’t think is the case. I find that splitting everything 50/50 disproportionately advantages him and basically results in me paying down a loan that I have no interest in.

One reader said she’s NTA and that she should be paying less than her BF.

Another Reddit user said she needs to rent her own place because this situation doesn’t sound like it’s worth it.

And this individual said she should break up with this guy if he’s going to act this way.