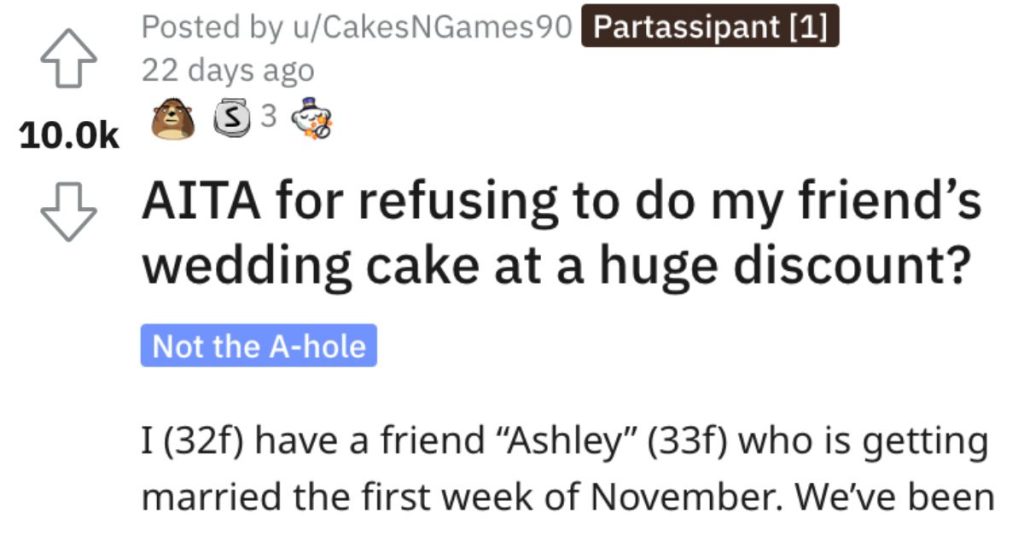 Where do you stand on giving friends discounts on things that you create?

I guess there are a lot of gray areas depending on what your product is, so I can see why some folks won’t or can’t give discounts to their friends…

And that brings us to today’s story.

Read on to see if you think this woman acted like a jerk.

AITA for refusing to do my friend’s wedding cake at a huge discount?

“I (32f) have a friend “Ashley” (33f) who is getting married the first week of November. We’ve been friends since we were kids, and I’m also a bridesmaid in her wedding.

We’ve been talking about wedding stuff for the past year as I recently married in April, so it’s been fun doing wedding stuff together until Ashley dropped some bad news. The person responsible for the cake for her wedding is moving and is no longer able to do it. She was refunded her money but now out of a cake.

I am a cake decorator myself. I was a teacher, and this is my first year as a school administrator, but I’ve held jobs in high end bakeries and make cakes for fun out of my house. I don’t have a cake business as I don’t want one.

Ashley asked me if I can do her wedding cake. I at first declined as I never do cakes for large events but with the date coming up and her not being able to find anyone, I caved.

Ashley wants a four tiered cake with four different flavors and 100 cupcakes, 25 of each flavor. The decorations will require me to order specialty molds and I’ll have to hand paint some gold onto the cake, as well. Total cost came out to $825, $100 more than the previous baker.

Ashley was upset and said I was overcharging but I showed her the breakdown (I used the same pricing system as one of the bakeries I worked at and it wasn’t even the most expensive one). I told her I would do it for the other quote if she was strapped for money but Ashley then asked me to do it for only $150.

When I asked why, Ashley said since she’s my friend, she should get a good deal and she could use the money to upgrade the hotel for their honeymoon, to think of it as my ‘wedding gift’ to her. I told her she was getting a good deal as I was willing to go to the price point of the previous baker.

But she mentioned that I did my sister’s cake for free several years ago and do free birthday and anniversary cakes for my [immediate] family all the time. I told her family and friends are not the same. Plus, I had more time to do my sister’s cake as I had less responsibilities as a teacher back then compared to what I do now.

She told me I needed a friend discount, so I said, “The discount is you get 0% off 100% of the time and if you keep bothering me, I’ll even add tax.”

Basically, Ashley didn’t like that response and has told the rest of the bridal party what I said, so I’m getting pressure from 9 additional women to drop the price, though some say to half it instead of dropping it to $150.

My parents paid for my wedding, so their main argument is I don’t need the money nearly as much as Ashley does, which they only know because they saw me using my parents credit card several times when out wedding shopping.

Only her maid of honor (her sister) thinks Ashley is being unreasonable. My husband thinks I should drop out of the wedding and not give her anything, but he also doesn’t like Ashley or her fiancé (he thinks she’s a spoiled brat).

One person had some advice for what this woman should do. 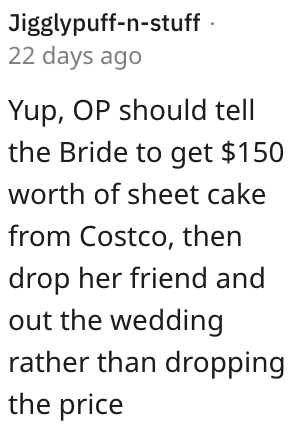 And this Reddit user offered up a suggestion for what she should say to her friend. 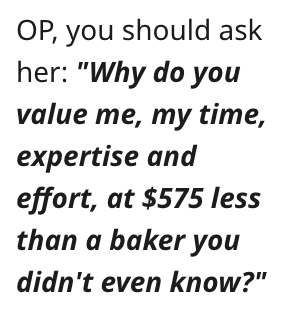 This individual said she’s NTA and that she shouldn’t even go to the wedding.