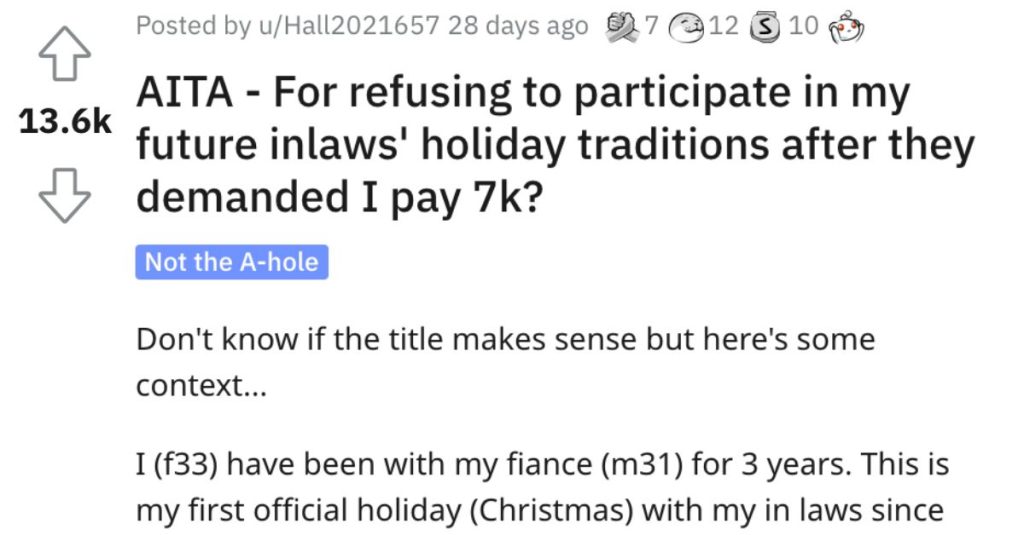 Well, this sure is a weird one…

Do people really expect others to fork over a bunch of money to take part in THEIR holiday traditions?

I guess the answer is YES, based on this story from the “Am I the A**hole?” page on Reddit.

Take a look at what went down here…

AITA for refusing to participate in my future in-laws’ holiday traditions after they demanded I pay 7k?

I (f33) have been with my fiance (m31) for 3 years. This is my first official holiday (Christmas) with my in laws since they refused to include me in previous holidays because I was just “the girlfriend” and wasn’t “official”. Anyways, My inlaws had a conversation with me about their holiday tradition which is a trip overseas that include the entire family.

They told me that this year the plan to have a distanitation holiday and spend 15 days visiting parks, ski resorts, malls and doing family bonding activities in the spirit of the holidays. It sounded great and I was excited to be part of that but they told me I had to pitch in with 7k…seven thousand dollars to be able to go with them.

My mind was blown because wtf that is a lot of money to spend on a holiday trip. For the record they’re wealthy and work high paying jobs while I have a 9-5 job that barely gets me by. I said I was sorry but I don’t have that kind of money. They said yes I do and brought up the money I had saved which is 10k as emergency fund for my 12 year old chronically ill son.

I said no and told them I’m not coming don’t count me in but they kept pressuring me saying I can’t decline to be part of my first holiday with them as they planned to introduce me to everyone and more importantly this is a family tradition and I’ll be disrespecting them by not coming since everybody will ask “where’s Adam’s fiancee?”.

I still declined and my fiance told me to really think about it as my son needs this trip and that money shouldn’t be a problem since it comes and goes and urged me to take this “priceless” opportunity to be part of something special that his family do and strengthen the bond with them.

He gave time to think but I’m not about to change my mind because it’s insane to expect me, a mother of a chronically ill child to blow that kind of money on a holiday trip.

My inlaws are disappointed in me pressuring me to make the right decision instead of dy**ng on the money hill.”

This person said that they think she doesn’t have an in-laws problem, but a problem with the guy she’s about to marry. 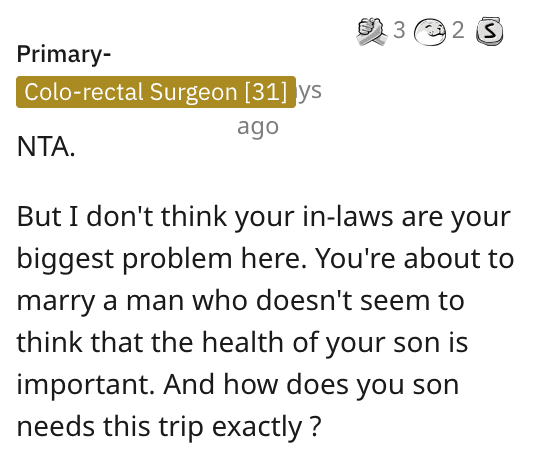 And this individual agreed that she has a major SIGNIFICANT OTHER problem. 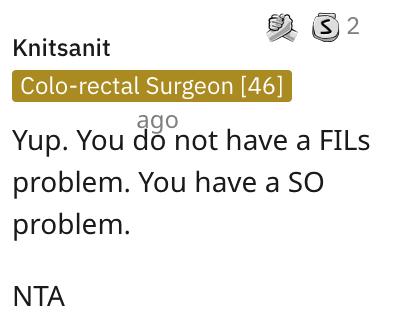 And this Reddit user said they can’t believe the man she’s about to marry isn’t the one who’s picking up the tab for this. 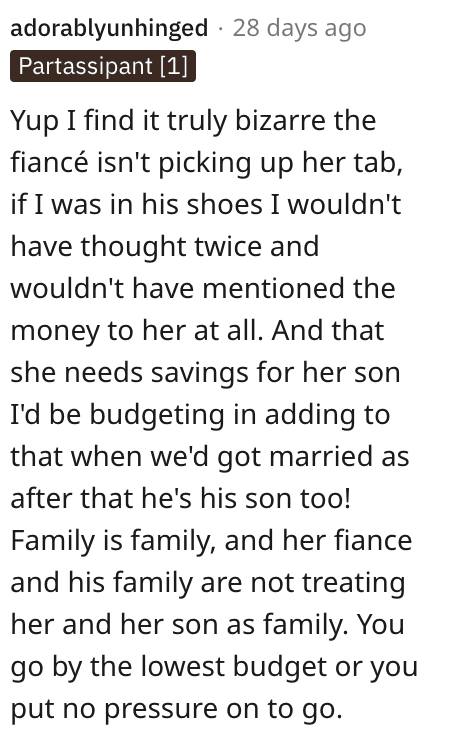