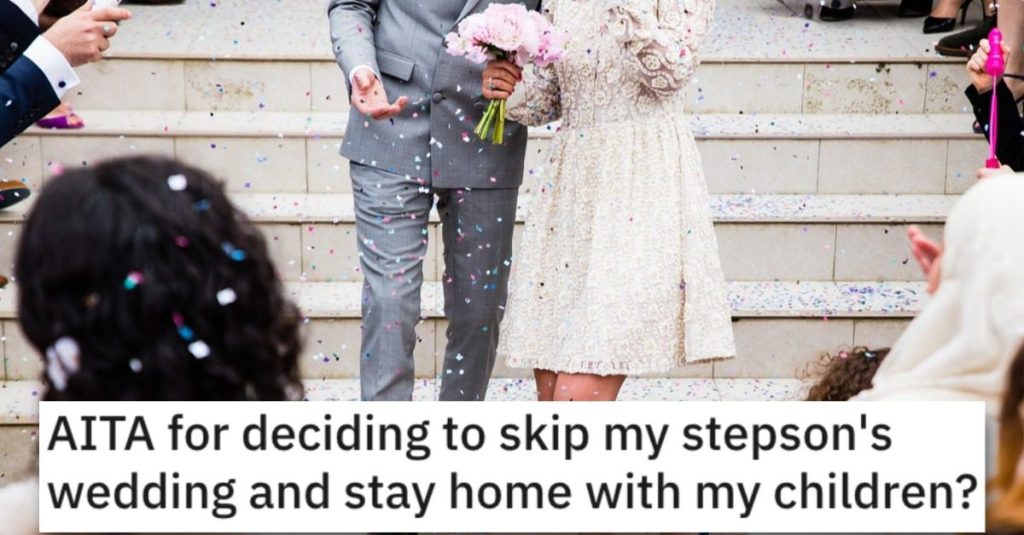 Have you ever purposely skipped a wedding?

I’m not talking about a last-minute emergency, but a conscious decision to NOT GO to a wedding for one reason or another.

Yeah, it can lead to some hurt feelings, for sure.

But did this woman act like an a**hole when she did this?

Check out her story below to get all the details and see what you think.

AITA for deciding to skip my stepson’s wedding and stay home with my children?

“I have been married to my husband for 25 years. He has two children from his first marriage. Kai who is 28, and Mia is 27.

My husband’s first marriage ended during the pregnancy with Mia when his ex moved another man into their home. She told my husband to leave and she was planning to marry the other guy. A DNA test was done when Mia was born, and another was done on Kai later, custody was decided and the divorce was finalized when Mia was still a baby. I met him 6 months later and we married after a year together.

My husband’s ex made our lives hell. She alienated the kids from me, we were in and out of court, therapy, they were always placed in mediation and co-parenting classes to try and get them to a better place. Nothing helped. Her second husband left and that only made her worse. Then she married again but that also ended.

My relationship with my stepkids breaks my heart. I love them, I have always tried to be a respectful and loving stepparent who doesn’t talk bad about their mom, overstep my place or assume they would love me the same as their parents. But I hoped we would be close.

They have been rude or distant and cold. But I loved them regardless and my husband took the lead with them. When my husband and I had our own two children together they did not bond with them but we still hoped time and therapy would help some kind of relationship form.

Now my stepson is due to get married. He told my husband our kids were not invited since it was a child free wedding. But then he told me what I could not wear (because the two mothers were going to match the theme and I am not counted in that), that I would not be given a corsage to wear so people would know I was not one of the parents, he said I would not be mentioned in any of the toasts, I was not welcome to give a toast, that the photos with the parents and immediate family would not include me and after my husband asked him why he was making such a big deal out of this he said I needed to know my place and then admitted he didn’t even want me there.

So I made the decision not to attend and instead stay home with my children. I have reached a breaking point where I just no longer see a future where we might get along better and clearly I am not wanted at all. But my husband’s family are furious and say I was invited so I should go.

This person said she’s NTA and she shouldn’t put herself through it. 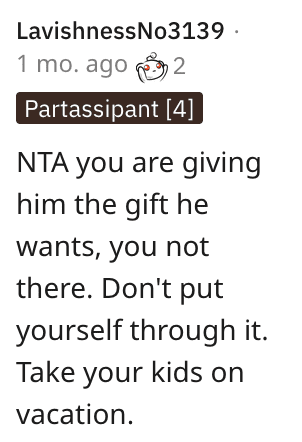 Another individual said she doesn’t have to go to this and she should stay home.

And this Reddit user said she’s NTA and she shouldn’t give anyone the satisfaction of going. 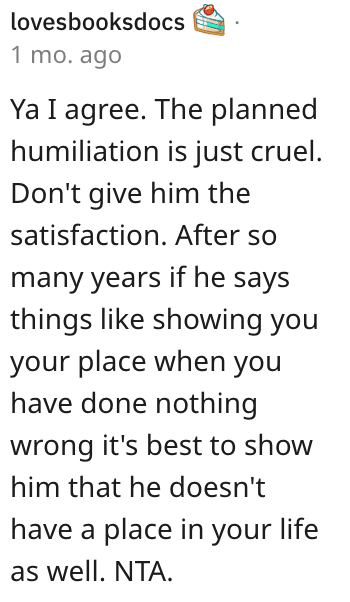