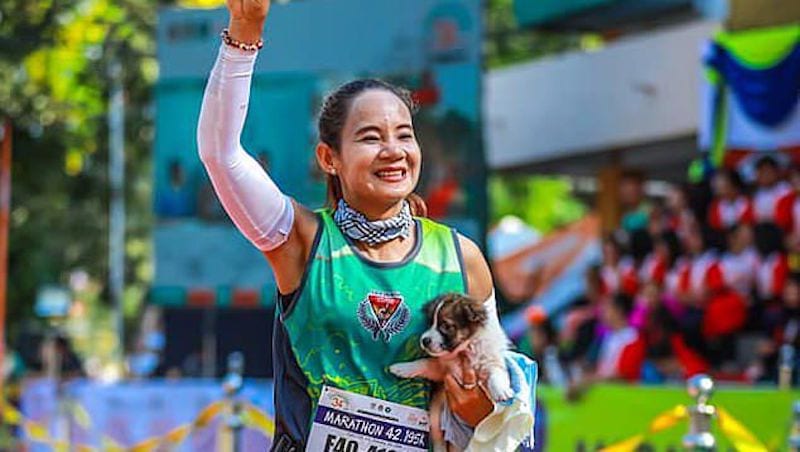 It’s always heartwarming when someone rescues an adorable puppy. But this Thai runner has definitely won the heartwarming-dog-rescue contest, hands down. She carried a puppy for 19 miles of her marathon – and adopted him at the end. Yes, really.

Khemjira Klongsanun first came across the puppy at mile seven of the Chombueng marathon in Ratchaburi, Western Thailand. 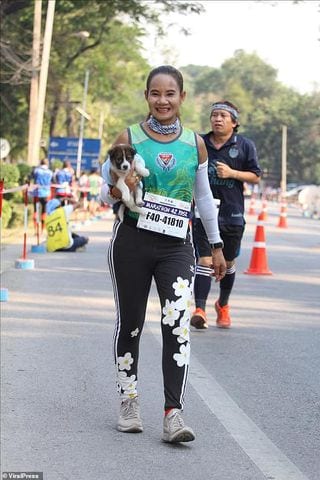 “It seemed to me that this little guy was lost,” Khemjira told reporters. “There were no houses, no other dogs, or no people around. So, I picked up the puppy, if only to take him out of the unsafe environment.”

Khemjira proceeded to carry the pup for the next 19 miles of her race. She crossed the finish line with him in her arms, looking triumphant.

“Running almost 20 miles carrying dog was truly a challenge. It was two times tiring than a normal marathon but I did it anyway just because he is adorable,” Khemjira said.

Adorable, indeed! After no one came forward to claim the lost puppy, Khemjira decided to adopt him as her own. She named him Chombueng, after the marathon. 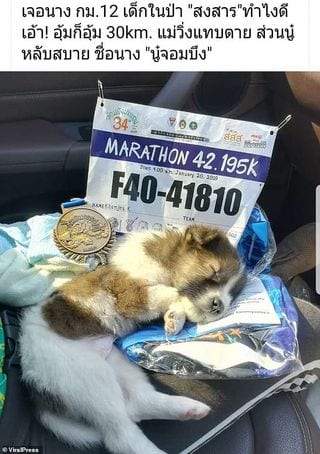 Chombueng looked exhausted and slightly confused after being carried for 19 miles. Now, however, he lives happily at Khemjira’s house with her two other dogs.

“Chombueng is a very smart boy,” said Khemjira. “I’m sure he is going to be happy living with us.”