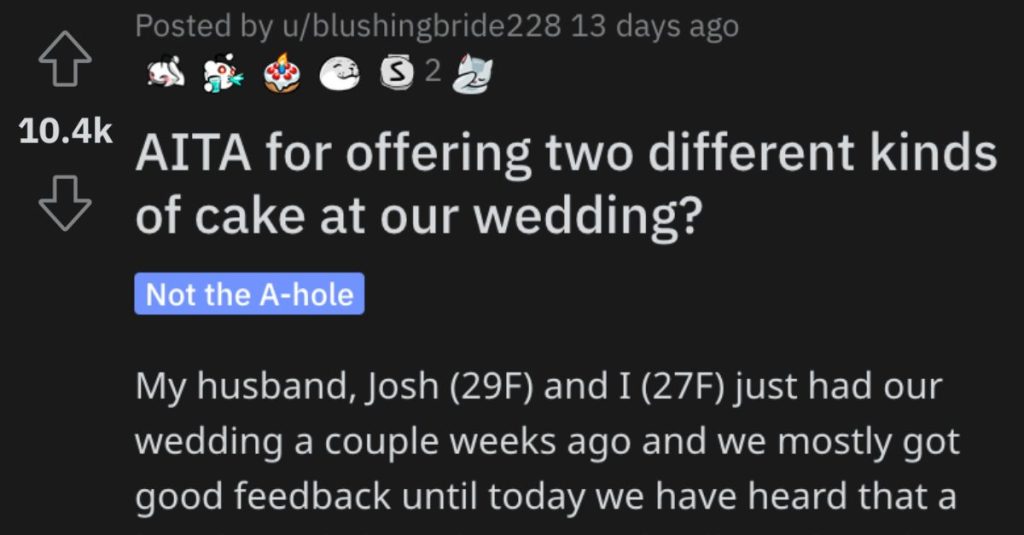 Is there anything wrong with having more than one cake at a wedding?

Check out her story below and see what you think!

AITA for offering two different kinds of cake at our wedding?

“My husband, Josh (29F) and I (27F) just had our wedding a couple weeks ago and we mostly got good feedback until today we have heard that a lot of people have been smack talking the cake behind our backs.

Josh and I originally were going to have a smaller wedding at a resort. We were fortunate enough to be given some money to invite extra guests, so we decided to expand the wedding and have some of our second cousins and their kids, and some friends that we otherwise don’t get to see as often.

We are on a budget, so we decided to keep the “fancy” cake (the cutting cake for the pictures, not the real cake) for immediate family and the pastor and a few members of the wedding party that we have known for the longest. We gave them the cake in boxes to take home though so they wouldn’t be eating it in front of everyone else.

(Minus the pastor because he flew out from a ways and he is vegan so he couldn’t eat the dinner and we wanted him to have something to eat before it got too late.)

We got a couple sheet cakes. One was vanilla and buttercream with rosettes and then there was another sheet cake of pineapple chocolate chunk especially for Josh’s side of the family (because they spend a lot of time in Florida).

We found out from talking with family that there was a lot of full slices left behind on people’s plates of the pineapple cake. (Which the servers would not take home with them, so we noticed you can see it in a lot of the pictures.) We were having too much fun to notice at the time, we loved catching up with all our guests!

Apparently Josh’s family did not like the cake like we thought they would and there have been some unkind words behind our backs. We got a text from Josh’s uncle that wasn’t meant for us to see and it really stung.

We are unsure where to go from here and what to say. The cake did not go off like we hope but we think they are being unnecessarily mean.

(By the way, there was a full dinner, three kinds of cheese— even Monterey Jack— available, and an open bar that didn’t close until late. So I feel like we were pretty good to our guests on a shoestring budget!)

TLDR: we gave out two different flavors of cake at our wedding. AITA?”

This reader said she’s NTA…but they had some questions…

Another individual said they think she’s NTA and that it sounds like she was doing her best. 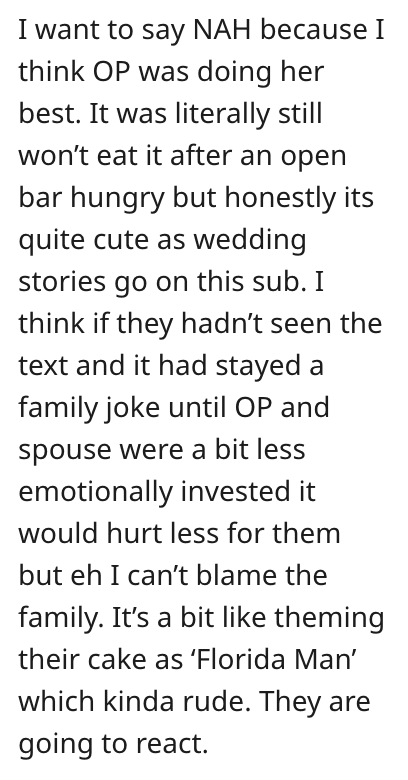 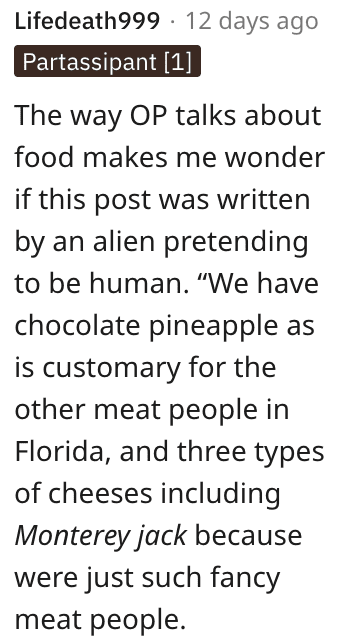