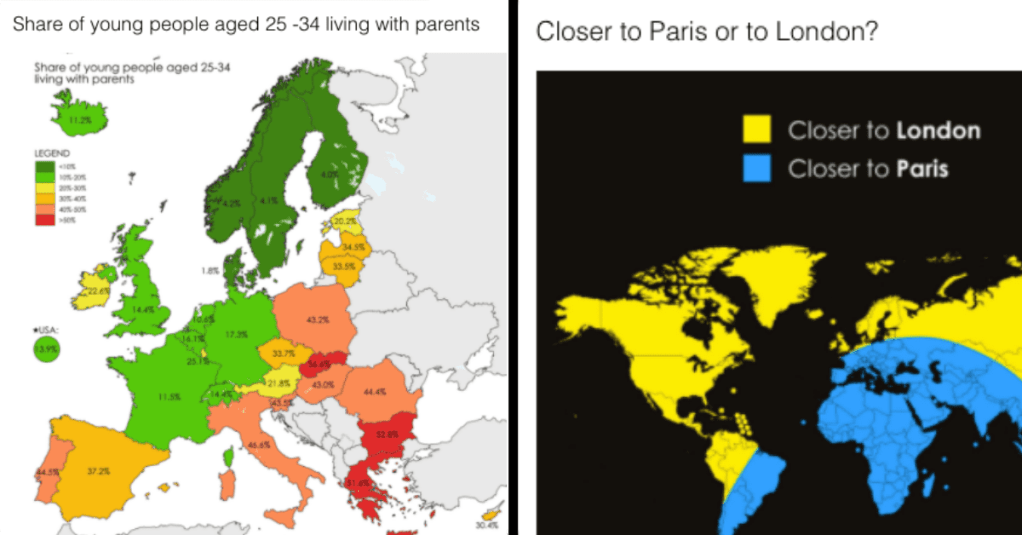 11 Interesting Maps You Should Take Time to Study

I love a good map!

I’m guessing if you’re here, you probably do too – and you’re going to be glad you clicked, because we’ve got 11 super fun and creative maps for you below.

We’re not talking about regular maps here, y’all – more like popular hats in Europe and reported UFO sightings around the world – so hold onto your own cool hats, people!

1. Countries that have never gotten hotter than ninety-five degrees.

That number is shrinking and shrinking.

countries that have yet to see true temperature extremes from MapPorn

In America we say “why not both?”

Butter or olive oil? Based on actual per capita consumption. from MapPorn

3. Variations on the name Paul.

Variations of the given name “Paul” from MapPorn

4. Sounds people make when they sneeze.

I had no idea there was such a range of differences.

How do you sneeze? from MapPorn

5. How Norway’s coast has changed.

I expected it to go the other way, for some reason.

Land reclamation in the Netherlands. from MapPorn

6. The longest train trip in the world.

I’m not going to lie, I would love to take this trip.

The longest possible train travel in the world from MapPorn

7. The percentage of people who trust climate scientists.

It’s a little worrisome, to be honest.

Percentage of people who trust climate scientists, 2020 from MapPorn

8. How we know Pangea was a thing.

Existence of Pangaea proven with evidence of similar fossils across continents. from MapPorn

9. The percentage of young people who still live with their parents.

See? It’s not as weird as the movies want you to think.

You definitely want to visit both, either way.

Closer to Paris or to London? from MapPorn

11. Countries with laws against spanking kids.

This whole map should be red, y’all.

Countries where it’s illegal to smack children!! from MapPorn

I could look at these all day, to be honest. So many cool things to consider.

What would you make a map of it you could? I want more ideas in the comments!