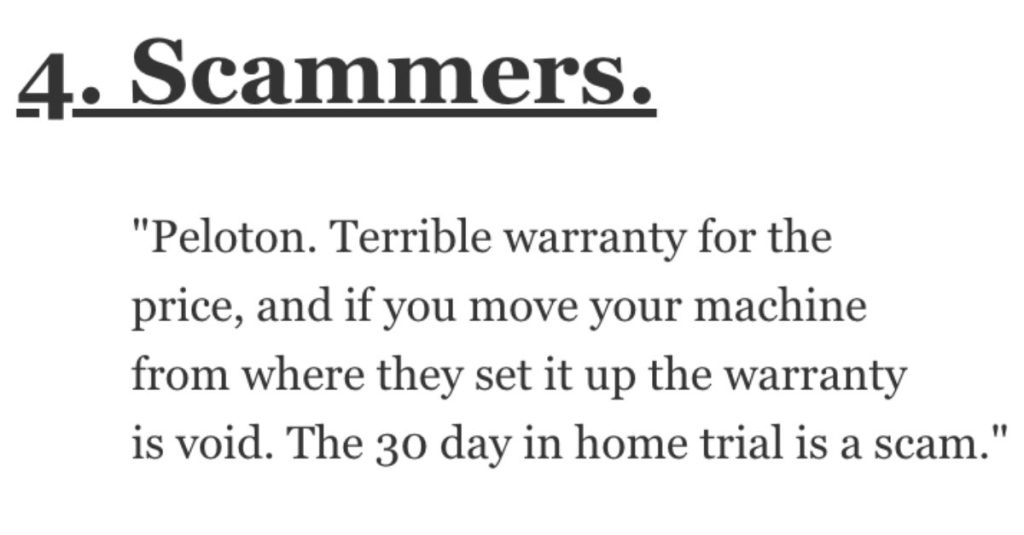 22 People Discuss Companies That They Think Are Terrible

People are passionate about a lot of things, and one of them is what companies they choose to support…and which ones they do everything to avoid.

You’ll find some of these answers pretty interesting!

AskReddit users opened up about the companies they think are awful and need to be put on blast.

I’d rather have slower internet than be forced into their data capped monopoly.”

Third party delivery apps are killer for local businesses. My family owns a restaurant and we were approached by an Uber Eats rep. The wanted a 30% cut of all sales made in the app (pretty typical for most of them, though I’ve heard they sometimes ask for up to 40%).

Our profit margin is ~10%, which is pretty standard for local restaurants from what I understand. Luckily, we already have a delivery service in place, but for some, it’s the only option they have and they’re getting absolutely robbed blind by these sh**ty companies.”

They treat their employees like c**p, i.e. overworking them, treating them like less than dog c**p and basically threatening to fire anyone who even mentions the word ‘union’. They also treat the DSPs worse than their own employees which is why a lot of people tend to quit.

Micromanaging the drivers with the Mentor driving app, firing drivers for not delivering all their packages yet telling them if it is not able to be delivered, then bring it back to the station.

They even have options in the Amazon app for customers to rate their delivery and if a customer gives anything below a 5 star, they get in trouble. Get 3, you’re done. Can’t back up while delivering and if you absolutely have to, you can’t go over 5 miles an hour even while on an incline. Do that, you get fired. It’s really not worth working for Amazon.”

Terrible warranty for the price, and if you move your machine from where they set it up the warranty is void.

One of their drivers killed a few people on the interstate about ten years ago because he didn’t notice that traffic had stopped for road work and mangled a couple sedans. He didn’t notice because his head was below the dash as he fumbled around for another energy drink. He also didn’t have his corrective lenses in his possession. Real professional.

Anyway, my issue with Reinhart as a company is that immediately after the collision, the dummy driver crawled down from his cab, in full view of his mangled victims, and called… 911? No. He called Reinhart. And what was Reinhart’s first reaction?

They sent their corporate lawyer to the scene. Because, you know, starting to build a legal liability shield is what’s most important when the bodies are still pinned in the wrecks. Two of the victims were a pregnant lady and her unborn.

Reinhart Foodservice supplies restaurants, so it’s not like I can personally boycott their business, but I otherwise would.”

“I used to work at Forever 21. Here are some common issues that happened.

1.) When items were not selling ripping them and damaging them out. Also damaging things that people were trying to return and blaming it on them so they couldn’t even get store credit.

2.) Selling leather harnesses, fishnet stalkings, leather mini skirts, and other things for 5 year olds. And having to watch people dress up their 5 year olds in the changing rooms and help them as they tried to make them s**ier. Then being told if I acted repulsed I would be fired.

3.) Being physically locked in the store after my shift ended and forced to stay late unpaid and clean.

4.) Being given shifts only if I spent enough money, and not being allowed to return anything even for store credit because I worked there, but being encouraged not to try things on because it wasted time of whoever was working.

5.) Being yelled at and called stupid, retarded and lazy less than 5 minutes into my shift because clothes were left in fitting rooms.

6.) Being paid less than my newer male coworker because I am a woman and he was a male. Manager told me he deserved higher pay for being a man in retail. Retail is hard for men.

7.) Having manager from 5 and 6 putting me back on probation without telling me so company could not recommend me for promotion and I would be passed up. Also so she could try to fire me and I wouldn’t be able to fight back.

8.) Having coworker who agreed with me that manager sucked forced to work warehouse and banned from talking to coworkers or she would be fired.

Eventually the entire store band together and got Canadian labour laws involved. It was a fun time. There is more than this, it was wild.”

7. A lot of complaints about this one.

“Nestle is literally digging under some “dehydrated” countries and when they get the water the only way the people who live there can get some is by working in their factories and then they get a ONE LITER BOTTLE for their whole village.”

“WHY IS NO ONE TALKING ABOUT GOODWILL.

They are LEGALLY able to pay their employees with disabilities (Down syndrome, etc.) less than minimum wage, sometimes cents to the hour. And their pay gets cut even more if they’re not productive enough!

For a company whose profit margins are insane because they don’t purchase their goods I was honestly hurt to know that that money goes to the CEOs at the cost of unfair wages to American people.”

“Coca Cola – hired killers to shoot union leaders in South America and also produces more waste than almost anyone else.

They changed their recipe from I think it was normal oil, to coconut oil, which is cheaper.

And so, because the demand is so high, and they need giant coconut plantations, they are taking down jungles in Africa to plant coconut palms, and that is destroying environments, killing species, and displacing tribes.”

They spend an absurd amount of money on suing other non profits that have either wounded, warrior, or a combination of the two in their name.

Non-profits that are actually trying to make an actual difference not just trying to shovel merch.”

They own thousands of private incarceration facilities and make profit off of selling beds at a nightly rate to the local counties.”

This is shocking enough but the details are really worrying for civil rights in the US: They are persecuting the lawyer who led the lawsuit against them, abusing the court system to try to jail him without trial, currently held in house arrest with no end in sight.

Like the type of egregious corruption and judicial abuse the US regularly sanctions other countries for.

Treats its workers like s**t, ignores needed maintenance resulting in hazardous/inhumane conditions for humans and animals alike, and scams taxpayers out of grant money which it doesn’t use for its intended purpose.

Let me also add that I’m being intentionally a bit vague because of reason 4, sues the f**k out of anyone who talks publicly about them in a negative way.”

“Live Nation, and their partners TicketMaster. They have you over a barrel if you like a certain artist enough, and they know it.

They do everything from working hand-in-hand with national scalpers to upselling actual physical seating in their venues as a “premium amenity.” You literally can’t beat them. From the inflated tickets, to the extra surcharges and hidden fees, they just print money.

They even scalp their own tickets through “verified resale” and “platinum tickets.” I could go on about this scam all day. Even if you buy a GA ticket and try to wait in line for hours to get up front, at certain venues they sell “skip the line” passes for extra $$$ and let people enter before you.

At the Live Nation venues in my city, they sell something called “Premium Experiences” or “Premium Seating” where the only places to sit and watch shows in the venues are auctioned off each night to the highest bidders – they literally change the price point on how much it costs to sit in a seat based on how packed the venue is / how much demand there is for the artist. That s**t ain’t gonna fly in a post-covid world!

This whole “sectioning off the best views in the room” and sequestering the rest of GA to be packed in like sardines is nonsense. I hate that when shows come back, Live Nation is going to have the battered competition by the balls, and their little pal Ticketmaster is going to be charging us through the roof to see shows again. They have what we want, and they know it.”

They are on par with Comcast with worse products IMO. I recently moved and had no choice but to get Wow. It’s actually amazing. Same internet speed as Comcast for $35 a month and I got YouTube tv for $65. My last Comcast bill for internet and one dvr box was $220.

Now I’m paying $100 and couldn’t be happier. If I had just kept internet with Comcast it would have been $90 a month lol.”

Forces pharmacists and technicians to go through grueling work pumping out prescriptions and insane metrics that have nothing to do with healthcare. In turn you have a lot of turnover which exacerbates the issues with inexperience.

The Chicago Tribune wrote an expose about working conditions that forced the Illinois government to MANDATE lunch breaks. That’s right, lots of CVS Pharmacy don’t have break so you’ll have workers going for 14 hours straight without break. Does that sound like a healthy working environment for effective healthcare?

As a pharmacy student that works there with full knowledge of the industry, please support your local pharmacy that WILL provide the best care and treat employees fairly.”

They’ve been sued left and right. If you love your animals fork over a little bit more money and get a better quality product.”

A “charity” whose CEO is a millionaire and that sues any other smaller charity for infringing on their “copyright”.”

“The United Fruit Company – now known as Chiquita – is responsible for a century of atrocities in South America.

Everything from slavery to coups – all with the help of dear old Uncle Sam.”

“State Farm: my grandma couldn’t pay after someone hit her car because the other person had no deductible & hers didn’t cover it all, but some agent allowed her to use some other deductible not related to car insurance to cover costs.

The agent also made sure she was taken care of after to make sure the car repairs were finished.

A lot of people take advantage of her due to her age, but this State Farm agent cared for my grandma & I’ll never forget. She won’t either. Thank you Ashlyn if you see this, you the realest.”

“L3-Communications; although as of a couple years ago it’s L3Harris after a merger.

You’ve probably never heard of them, but they are one of the most powerful companies in the US, even the world. They’re all into defense and aerospace stuff mostly, and they’re one of those no-bid contract billions a year from our tax dollars.

They’ve been in all sorts of scandals from running essentially their own domestic espionage agency using stolen government resources to using defective parts to stuff the general public doesn’t even hear about.

I know we talk about how Nestle and DeBeers and tobacco companies etc are evil, but you want to see some real horror stories, look up companies like these.”

Are there certain companies that you refuse to support?