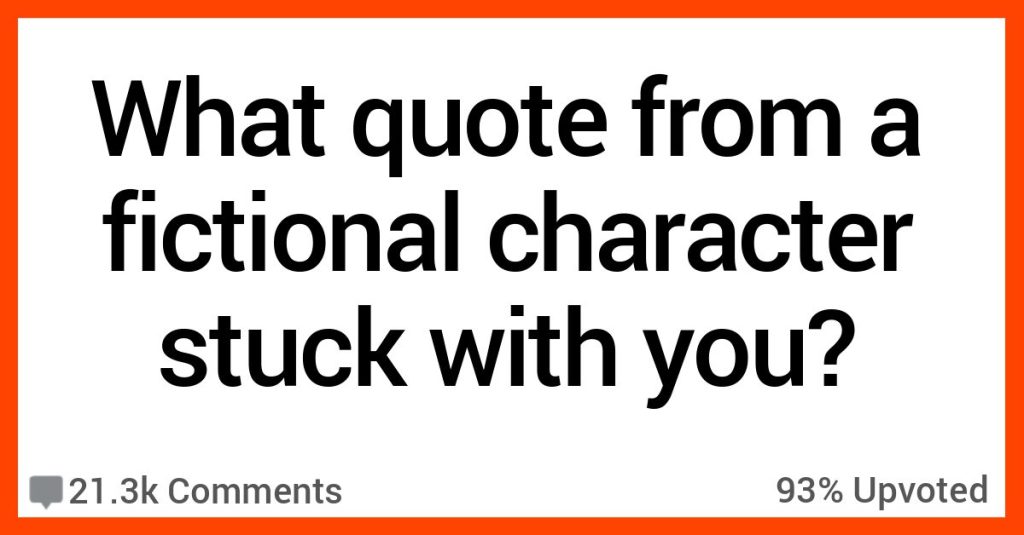 I know that some people out there like to dismiss fiction as not serious or lesser-than, but anyone who is a fan knows that’s wrong all the way to its core.

And just because characters and a story aren’t real doesn’t mean the life inside of it is false, after all.

This is why so much good fiction hits so hard – like these lines, which people say have always stuck with them no matter how much time has passed.

1. Right out from under you.

“It is a curious thing, the death of a loved one. We all know that our time in this world is limited, and that eventually all of us will end up underneath some sheet, never to wake up. And yet it is always a surprise when it happens to someone we know.

It is like walking up the stairs to your bedroom in the dark, and thinking there is one more stair than there is. Your foot falls down, through the air, and there is a sickly moment of dark surprise as you try and readjust the way you thought of things.” – Lemony Snicket

A pen isn’t mightier than a sword. Pens do not do battle, nor swords poetry. Mighty is the HAND that knows when to pick up the pen, or pick up the sword.” -Wiegraf Folles

“Do you remember the last time we had a quiet drink together, just the two of us? I had a milkshake.”

Indiana Jones to his father in the Last Crusade

“My first time, Afghanistan. We were moving through a house and… suddenly a man was there and I shot him in the stomach. Yeah, that’s a real war story. There are never any good stories like in movies – they’re s*%t.

A man was there, boom… stomach. I was so scared I didn’t pull the trigger again for the rest of the day. I thought, well, that’s it, Bacho. You put a bullet in someone. You’re not you anymore. You’ll never be you again.

But then you wake up the next morning and you’re still you. And you realize: that was you all along. You just didn’t know.”

From the fourth episode of Chernobyl.

“Don’t waste your time looking back. We’re not going that way.”

Big fan of Granny Weatherwax for this one.

“You say that you people don’t burn folk and sacrifice people anymore, but that’s what true faith would mean, y’see? Sacrificin’ your own life, one day at a time, to the flame, declarin’ the truth of it, workin’ for it, breathin’ the soul of it. That’s religion. Anything else is just . . . is just bein’ nice. And a way of keepin’ in touch with the neighbors.” ― Terry Pratchett, Carpe Jugulum

7. They never quite shine.

“When a child first catches adults out — when it first walks into his grave little head that adults do not always have divine intelligence, that their judgments are not always wise, their thinking true, their sentences just — his world falls into panic desolation.

The gods are fallen and all safety gone. And there is one sure thing about the fall of gods: they do not fall a little; they crash and shatter or sink deeply into green muck.

It is a tedious job to build them up again; they never quite shine. And the child’s world is never quite whole again. It is an aching kind of growing” -East of Eden, John Steinbeck

“There’s no grays, only white that’s got grubby. I’m surprised you don’t know that. And sin, young man, is when you treat people like things. Including yourself. That’s what sin is.”

“It’s a lot more complicated than that–”

“No. It ain’t. When people say things are a lot more complicated than that, they means they’re getting worried that they won’t like the truth. People as things, that’s where it starts.”

“Oh, I’m sure there are worse crimes–”

“But they starts with thinking about people as things…”

This helped me get through methamphetamine addiction. Because I indeed lost everything and the first step into my recovery was finally hitting the very bottom.

“There’s… triplets in my mind. The woman I am. the woman I must be. The woman I long to be. Like all sisters, they tend to be at odds with one another. From time to precious time. ” Divinity original sin 2 – Sebille.

“You can ask any doctor, sometimes it seems like patients just hang on until everyone’s had a chance to say goodbye.” – JD, Scrubs.

By coincidence, I first watched that episode with that particular quote in it the night after my Grandmum died. She died whilst I was on the plane to see her and say my goodbyes, and I missed her by mere hours. That particular line had me on the floor weeping like a baby.

“I wish it need not have happened in my time,” said Frodo.

“So do I,” said Gandalf, “and so do all who live to see such times. But that is not for them to decide. All we have to decide is what to do with the time that is given us.”

“Money doesn’t change people. It just makes it easier for them to be who they are.” -Grandpa Abraham Simpson

Oddly enough, the one that stuck with me was also with Abe. I used to be with it, but they changed what it was. What I was with, isn’t it, and whats it, is strange and scary.

Frodo: It’s a pity Bilbo didn’t kill him when he had the chance.

Gandalf: Pity? It was pity that stayed Bilbo’s hand. Many that live deserve death. Some that die deserve life. Can you give it to them, Frodo? Do not be too eager to deal out death in judgment. Even the very wise cannot see all ends.

“It is possible to make no mistakes and still lose. That is not weakness; that is life.”

I think this is most critical to understand with regard to others.

It’s important to understand this regarding yourself, but it’s also easier to incorporate all context in judgments of yourself. You should forgive yourself for failures and that might take some cognitive effort, but you were also present for the whole situation and know all the facts.

You can see this all over the internet. Post any story/picture/video/whatever about yourself (or someone else) failing and people will come from all corners of the world to tell you how you did this or that wrong and how the failure was all your fault and how they’ve never had any problems because they were smart/strong/motivated/whatever enough to do things this other way.

“Pride is not the opposite of shame, but its source. True humility is the only antidote to shame.”

This is the quote that stuck with me the most: Aang and Iroh were slowly walking together while descending a tunnel, earthbending in front of them as they went, with the intent to reach an underground cave complex to rescue Katara and Zuko. (At this point in the series, Zuko had never been anything but an antagonist to Aang, and because Iroh is Zuko’s uncle, the two hadn’t ever had a real talk.)

Aang: “So, Toph thinks you give pretty good advice… and great tea.”

Iroh: “The key to both is proper aging. What’s on your mind?”

Aang: “Well, I met with this guru who was supposed to help me master the Avatar State and control this great power. But to do it, I had to let go of someone I love… and I just couldn’t.”

Iroh: “Perfection and power are overrated. I think you are very wise to choose happiness and love.”

Aang: “What happens if we can’t save anyone and beat Azula? Without the Avatar State, what if I’m not powerful enough?”

Iroh: “I do not know the answer. Sometimes, life is like this dark tunnel. You can’t always see the light at the end of the tunnel, but if you just keep moving…”

Iroh, smiling: “You will come to a better place.”

21. Be curious, not judgemental.

“Guys have underestimated me my entire life. And for years, I never understood why. It used to really bother me. But then one day, I was driving my little boy to school and I saw this quote by Walt Whitman, and it was painted on the wall there. It said, “Be curious, not judgmental.” I like that.

So I get back in my car and I’m driving to work, and all of a sudden it hits me. All them fellas that used to belittle me, not a single one of them were curious. You know, they thought they had everything all figured out. So they judged everything, and they judged everyone. And I realized that their underestimating me… who I was had nothing to do with it.”

22. We all grieve differently.

“You mistake my choice not to feel as a reflection of my not caring, while I assure you the truth is precisely the opposite.”

“And I knew right then and there that I was never gonna let anybody get by me without understanding they might be hurting inside, you know. ‘Cause life … it’s hard. It’s real hard.”

“But if we stop, if we accept the person we are when we fall, the journey ends. That failure becomes our destination. To love the journey is to accept no such end. I have found, through painful experience, that the most important step a person can take is always the next one.”

“Every day, it gets a little easier. But you have to do it every day, that’s the hard part. But it does get easier.”

“Saruman believes it is only great power that can hold evil in check, but that is not what I have found. I have found it is the small everyday deeds of ordinary folk that keep the darkness at bay… simple acts of kindness and love.”

“There’s some good in this world, and it’s worth fighting for.”

“What makes a man like Ringo, Doc? What makes him do the things he does?”

“A man like Ringo has got a great big hole, right in the middle of him. He can never kill enough, or steal enough, or inflict enough pain to ever fill it.”

“What does he need?”

She was the kind of girlfriend God gives you young, so you’ll know loss the rest of your life.

PIPPIN: I didn’t think it would end this way.

GANDALF: End? No, the journey doesn’t end here. Death is just another path, one that we all must take. The grey rain-curtain of this world rolls back, and all turns to silver glass, and then you see it.

PIPPIN: What? Gandalf? See what?

GANDALF: White shores, and beyond, a far green country under a swift sunrise.

PIPPIN: Well, that isn’t so bad.

I can see that I need to view/read some of these right away.

What’s the fictional quote that’s made the biggest impact on you? Please share it with us in the comments!