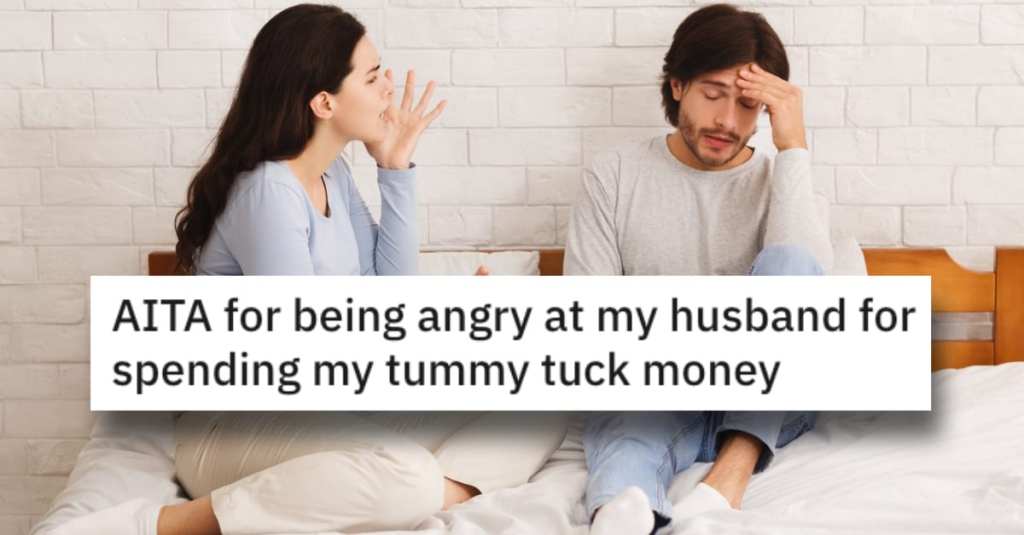 Money can be a sticky topic for a lot of couples, no matter how long they’ve been together. Sometimes, you think you’re both on the same page about how money should be spent, only to find out that you definitely are not.

One woman recently had this unwelcome realization. The woman says that she and her husband have been saving a lot of money so she can have a tummy tuck after delivering their third child.

The procedure is far from being strictly cosmetic — her stomach muscles separated after she had her first child, and she’s experienced a lot of pain and back spasms ever since.

Both the woman and her husband were on board for saving the money and agreed on how it would be spent.

Well, after the woman gave birth to their last child, she was ready for the procedure… and found out her husband had spent all the money.

She starts off by noting that they both agreed on spending the money this way, and they’ve been saving since she was pregnant with their first child. 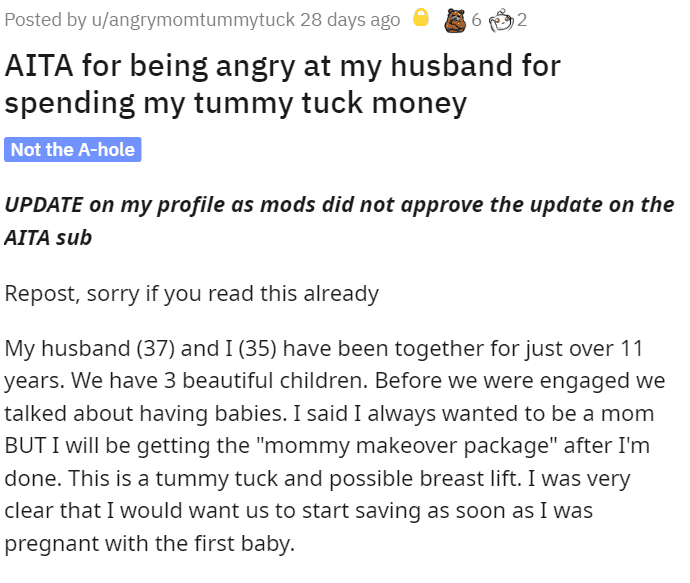 It sounds like she’s really in a lot of pain due to the way her stomach muscle split.

Now, their youngest is one-year-old, and she’s ready for the surgery.

When she tells her husband this, she receives some seriously unwelcome news. 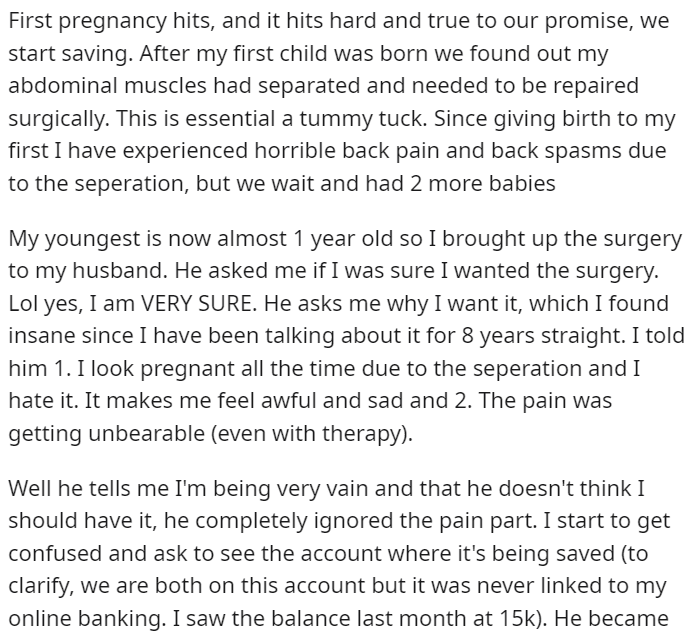 It’s a little strange that the account hasn’t been linked to her online banking, especially since she is on the main account.

She says that when she asked her husband what happened to the $15,000 they had saved up, he totally bailed. 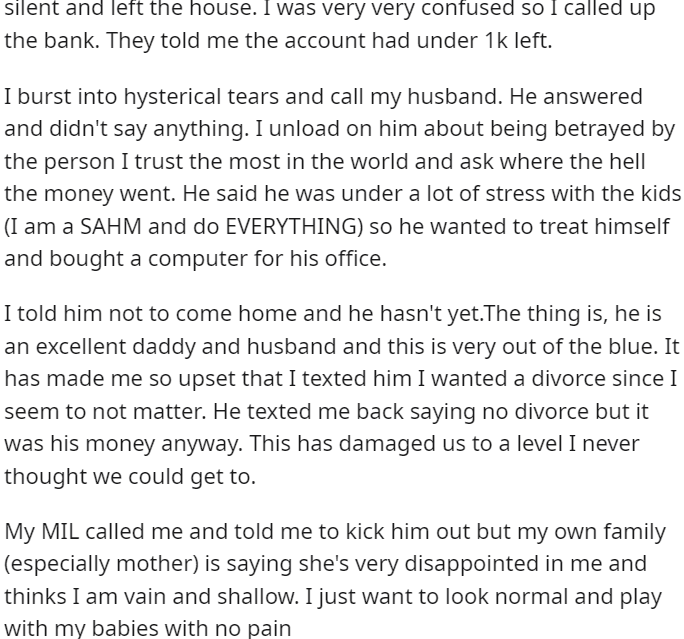 It feels completely fair that she’s so upset — they were both saving the money, and she thought they were on the same page.

Unfortunately, it gets even worse. Her husband tries to argue that he thought she didn’t want the surgery anymore… which is just not true. 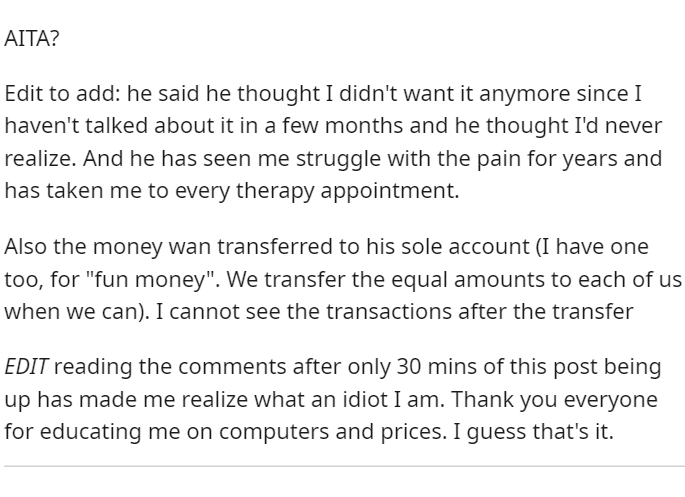 The story continues — all of the sudden, her husband seems ready to take it all back, and he somehow still has the money he said he spent. 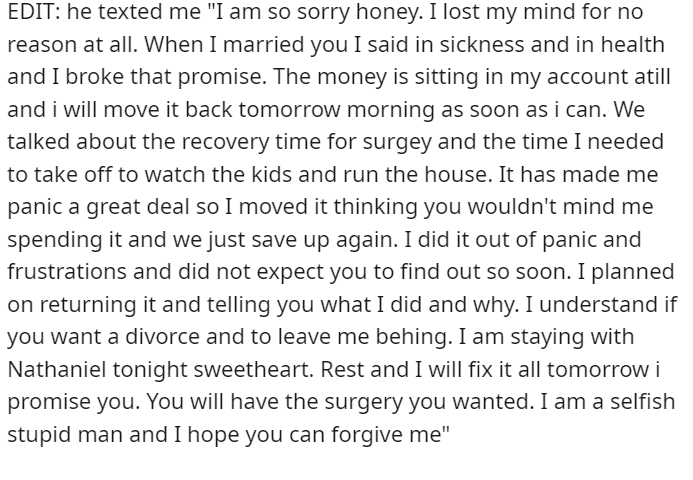 It’s really hard to even know what her husband is trying to say at this point, and the woman says that she doesn’t think she can trust him anymore.

Luckily, the woman has people in her corner, but it’s still disappointing that her husband isn’t one of them.

People on Reddit definitely agree: this woman is not the problem here. 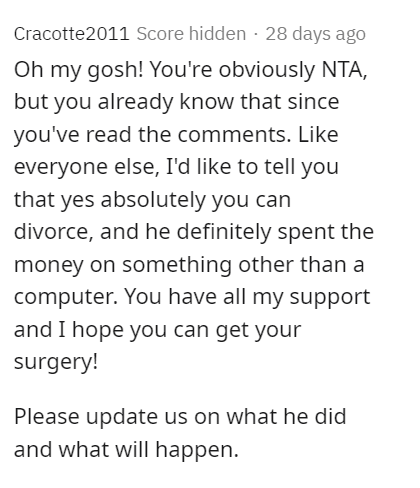 One person suggested a whole list of things the couple could try if they want to rebuild trust in their marriage, but it’s not clear if this is what the woman wants or not. 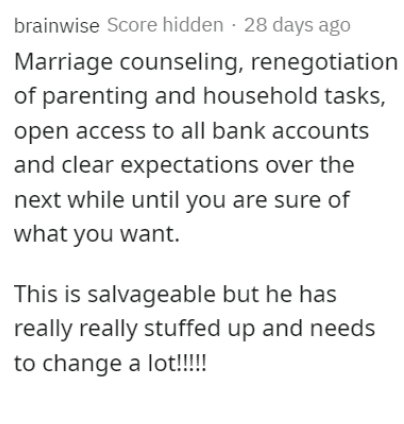 Another commenter made a really interesting point: the amount of money is suspicious in and of itself. Could he have sent it to someone else? 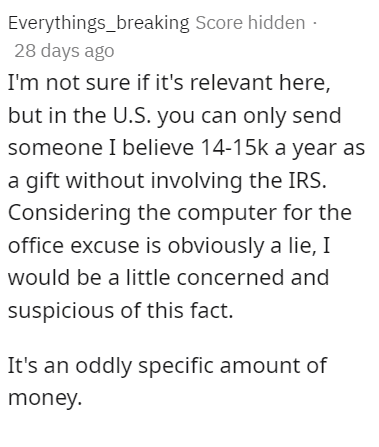 One point that is repeated over and over throughout the comment thread is that her husband treated the woman really badly. 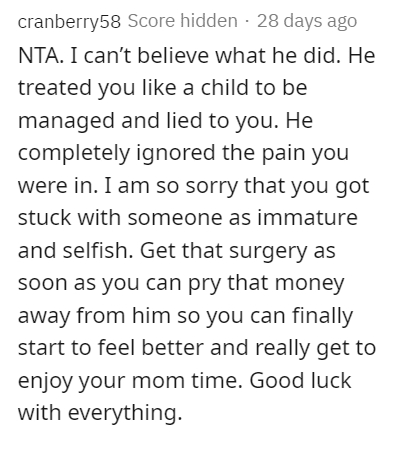 It can’t be overstated: this is her partner! He’s supposed to support her, and instead, he totally flaked. 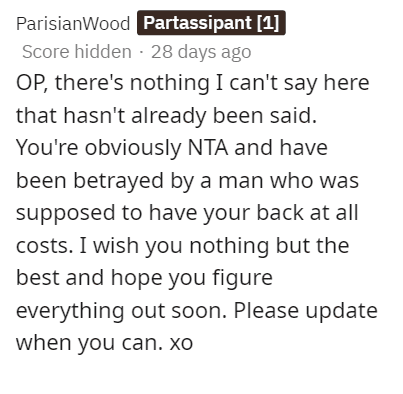 Many people were hoping the woman would update, but it doesn’t seem like she has.

Can you believe how this story turned out? What would you tell the woman to do? Let us know what you think in the comments!