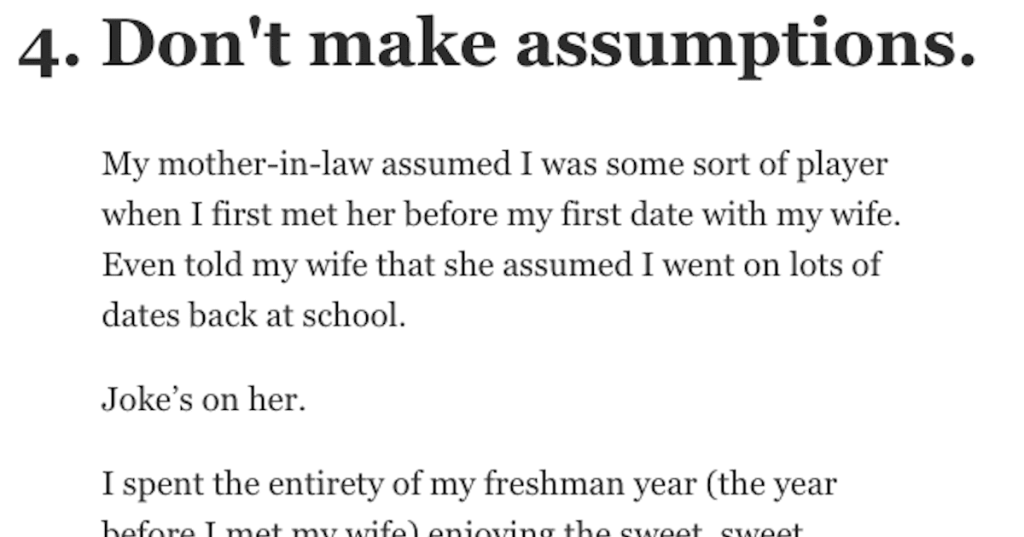 Several parents have chimed in on a giant Reddit thread to share how they really feel when their kids bring home someone new.

If you’re expecting a lot of awful stories, you might be surprised. There are a lot of level parents out there!

I care that my daughter is:

Apart from that, I’m just enjoying watching her experience things, and hoping she includes me in some of that.

I must admit I was a bit nervous and I remember very well being 18 and what I was thinking/wanting, but had a word with my self to be welcoming and warm and to treat him as an equal, my daughter’s friend and therefor my friend.

Anyway, he’s a nice young man so it’s all good. But I to answer your question I guess if he’s nice I’ll like him if he’s a dick I won’t.

Either way as far as my daughter is concerned I’ll like him.

My daughter(13) wanted me to meet her first “real” boyfriend. I was nice and pleasant, but I knew it wouldn’t last cause he was all looks and no brains.

Of course, as or high relationships go, it was about a 2-month ordeal. I think all parents should try and be cordial unless the person feels like a serial killer or something.

My mother-in-law assumed I was some sort of player when I first met her before my first date with my wife. Even told my wife that she assumed I went on lots of dates back at school.

I spent the entirety of my freshman year (the year before I met my wife) enjoying the sweet, sweet internet speed of my dorm room and playing the shit out of Halo 3, Mass Effect 1 & 2, picking up drunk dorm-mates from house parties at 3 am, and going on exactly 0 dates.

After years of getting to know my MIL, she just didn’t want her daughter to get into a long-distance relationship, then end up moving out of state with me if we got married and I was still there (which ended up happening. Whoops).

I have always instinctively known within seconds of meeting them.

I’ve liked all but one of my son’s partners, and the one I didn’t feel right about was the one who screwed him up.

My stepdaughter’s boyfriend came into MY house and we were talking about computer games and he had the audacity to tell me why red dead 2 was better than god of war.

IN MY HOUSE!! But respect to the lad for that, he stuck to his principals and a year later still argues with me about gaming stuff.

My eldest is 15, and boys in high school can be….gross. The way they speak to girls (and girls to boys) is just so far out of line it makes me ill.

But her boyfriend is respectful to her and her family. Most importantly they’re the same brand of weird.

They facetime 19 hours a day I swear, but yesterday they had an entire conversation about penguins both using the same weird fake Russian type accent.

He’s her safe place and without very good cause, I’d never get in the way of that.

8. It’s a reflection of themselves.

I love to meet his girlfriends. In a very self-serving way, I think his ability to attract charming ladies reflects the quality of my parenting.

On one hand, I like whoever brings joy to his life. On the other hand, I prefer to be around polite and well-spoken people. A bit of nervousness on her part indicates that meeting me is important to her.

I said, “Whatever you do to my daughter, I will do to you.”

I’ve been stuck giving him emotional support and validation for three years. That fucking bastard.

I am nice to my son’s girlfriend and my daughter’s boyfriend.

It’s not my job to have an opinion on who they choose.

If it all goes belly up I’m there to support them until the next one goes wrong. Rinse and repeat until they find their “one” or I’m dead.

I’ve been the hated boyfriend for no reason. It really sucks and affects the relationship.

My ex makes no secret of her opinions on the kid’s partners the only thing that does is stops them talking to her about issues they have in their relationships.

I feel excited for them, it’s that wonderful time at the start of a new relationship and it’s exciting to see them happy and enjoying this new experience.

It’s still quite new for me (and them) so as a parent I’m still learning.

I’ve been fine with all the people I’ve been introduced to so far, maybe as I know that the likelihood is these relationships won’t last so for me it’s not an issue if I don’t take to them. Time will tell once their relationships become more serious.

My husband and I always “like” the person unless there’s something terribly wrong with them. First of all, we want our kids to trust us and never to disregard our not liking a potential mate because “we never like anyone”.

Secondly, we would never want our kids to feel like they have to choose – it’s their mate, not ours.

Thirdly, most young people are fairly okay, so no point in acting like no one can be good enough for our precious babies.

Just like hairstyles. Doesn’t matter if I like your hairstyle or not, you’re the one who has to wear it.

Now, if my daughter asks me advice, or asks my opinion, I’ll be honest with her, even if it may hurt, because I care about her and I only want to see her happy.

But if I’m not asked, I will welcome the guy, be friendly and kind to him, and keep my opinions to myself. Why? Because SHE chose him, and if that makes HER happy, then I’m happy.

Do they respect themselves? My son? My home?

If the answer to any of those is No, then I do not like them.

15. Keep the longterm in mind.

My kids are 16 and 23. My goal as a parent now that they are old enough, is that they like me and respect me as a person, not just because I AM MOM. I think a huge part of that, is keeping an eye out for red-flag behavior in either my kid or their partner, and letting the rest of it alone.

If it turns out that I do like them that is great, I still try to keep a bit of distance.

They are too young for me to consider everyone who comes through the door a potential in-law. I follow my children’s lead with how much they want me to bond with their SO.

If it turns out that I do not like them, but no red flags, I make sure to keep it to myself.

I have no intention of destroying a great relationship with my kids because their partner is not someone I want to hang out with on my own.

I can put up with anyone who makes my kid happy for the length of a sit-down dinner.

What do you think about what these parents said? Which is your favorite?