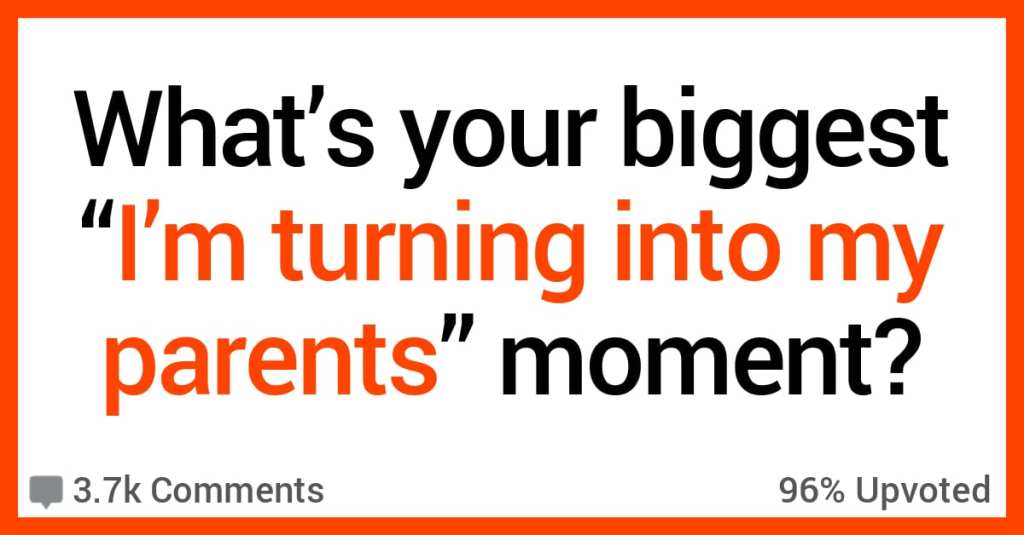 People Share Their “I’m Turning Into My Parents” Stories

I usually don’t pay attention to the commercials on TV or they annoy the hell out of me, but I gotta say that those Progressive Insurance ads about turning into your parents are totally hilarious.

Because most of us can relate to that stuff as we start to get a little bit older, no doubt about it.

People on AskReddit talk about the moments they realized they were turning into their parents. Let’s take a look!

“Every time I get angry.

My mom is this type that always explodes when she’s angry, everything and everyone near her will burn because of her wrath.

And it happened multiple times to me and when it happened my brain goes “sh*t, dude, we’re just like her! Stop!”

“When I was a kid, I was constantly going outside and coming back inside. It annoyed my mom to no end. She used to say “In or out!!!! Pick one!”

About 20 years later, I have an amazing kid. Now that he’s old enough, he is constantly going outside or coming inside and NEVER closes the the sliding glass door.

Hence, either heat or air conditioning is being wasted for most months out of the year. I caught myself telling him “In or out!!!! Pick one…..oh crap, now I understand my mom’s frustration…..”

And yes, I’ve told him to shut the door. Many, many times. He’s never closed a door or turned off a light without my reminding. I’m hoping it sinks in soon. Sigh.”

“My wife and I went to visit my parents a while back.

It’s about a 1.5 hour drive so we stopped to pick up some coffee in the morning before the journey. I took a sip them went on a rant about how everywhere serves coffee too hot it’s undrinkable and I hate it.

A few hours later my dad started complaining about how he hates Starbucks because they serve their coffee too hot he can’t drink it, and my wife busted out laughing.”

“I know the exact moment.

I was 29, driving my dog somewhere and he climbed in the back seat and was acting up.

I turned around and heard myself say, completely unironically, “If I have to pull this car over, buddy, are you gonna be sorry.””

“When I started watching movies and making sure everyone knew what each actor had acted in before and who their parents were (if they were famous as well).”

“When my father had to go to work and my mother was free, she still woke up with him and prepared him lunch.

I never understood why, since she could sleep for a couple more hours and he was perfectly capable of making his own lunch.

Well, a couple of years later my boyfriend just started his first job while I have a few weeks off between clinical rotations, and here I am waking up with him and preparing his lunch.”

“Yelling at the news.

I remember constantly asking my dad if he realized the people on tv couldn’t hear him.

Sometimes you just have to yell, though.”

“Tearing up and becoming emotional when watching even slightly sad movies/shows.

Never used to be like this until I got into my 20ss.. what’s happened? I’m just like my mom now.”

“Waking up before 5am everyday, drinking massive amounts of black coffee, getting extremely grumpy when prepping for vacations…

“When I was a kid and we were watching family movies, if the kids in the movie were cheeky to their parents or a smart-mouth my mother used to get angry at the movie and make declarations about how she would slap the little brat into next week if they spoke to her like that (she actually would have – and did, plenty of times).

I’m 40. I don’t watch a lot of television but in the past week I watched Uncle Buck and Bad Moms at Christmas (don’t judge me), both of which feature kids being cheeky / smart-mouthed to their parents.

I felt my blood rise and caught myself thinking that I would slap those children into next week if they spoke to me like that as a parent.

“The first time I yelled “DON’T TOUCH THE F*CKIN’ THERMOSTAT!”

Now, to be clear, this was directed towards my wife, who for some reason has about a two degree comfort range. My kids were confused, because they aren’t old enough to know what a thermostat is or what it does.

A few weeks go by, and I hear my wife in the living room tell my son “Tell Alexa to turn the thermostat up.” I lean into the doorway a bit, and my son locks eyes with me.

He then looks my wife dead in the eyes, with the most serious look he can muster and says “No way Mommy. Daddy said don’t touch the f*ckin’ thermostat! Are you trying to get Alexa in trouble too?!”

“Mumble rap, this is not music.

And that’s exactly the same thing my mom said when she came into my room while I was listening to Rage Against the Machine!”

“Daily yelling at nobody in particular about lights being left on and doors open.

Grunting when standing up.

And investing a hearty sum into various pain relief creams/ointments.”

In the comments, tell us your “I’m turning into my parents” stories.