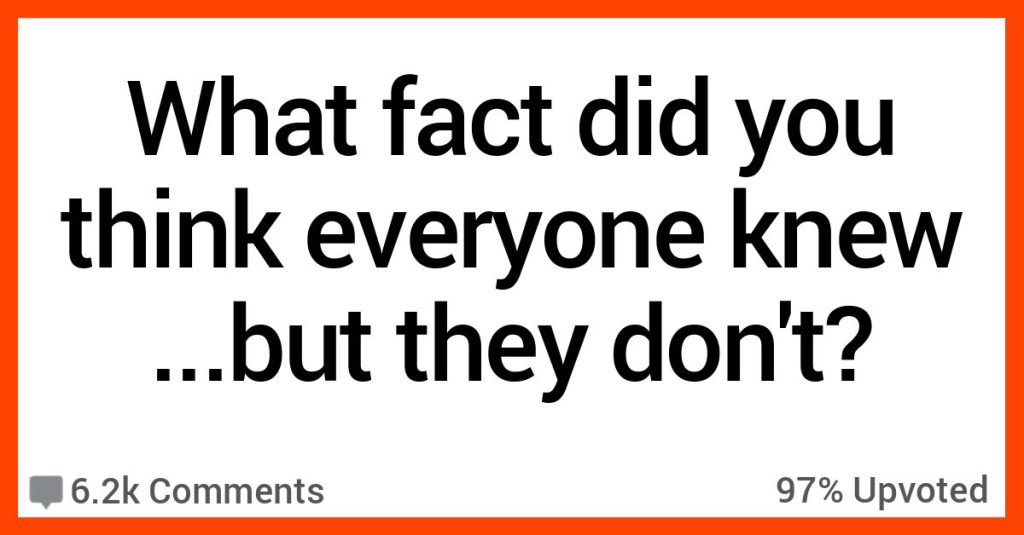 What Fact Did You Think Everybody Knew…But They Don’t? People Responded.

There is a lot to know about this world, how it works, and all of the people who have ever inhabited it.

Some people know tons of information about a few things, some know a little bit about a lot of things, and others, well… acquiring random bits of knowledge isn’t everyone’s thing.

I knew this but stole the whole text directly from google search:
Percentages are reversible. So, 16% of 25 is the same thing as 25% of 16 (4). Only one is easier to calculate in your mind than the other.

I got laughed in my face when I told people that smoking (amongst other harmful things) is very bad for your skin.

and your teeth. Not just staining, it damages your gums.

Chickens do not need roosters to lay eggs.

And I just learned this from my nana who grew up on a farm…if you slaughter a chicken and see their innards, they have multiple eggs inside of them, in different stages of development, in different sizes.

I was shook, I had no idea about that.

That the idea that you eat x number of spiders every year is complete hogwash.

The myth is that you eat eight spiders a year in your sleep. There’s a really good video about this by the channel LEMMiNO on YouTube.

He actually falls down the biggest rabbit hole, learning that the myth apparently originated from an article written by one Lisa Birgit Holst in a magazine.

He then finds that the origin of the myth… is a myth in and of itself, simply to prove how easy it is for people to believe what they read.

You know when there’s a Friday the 13th in the calendar because that particular month starts on a Sunday.

If there is a Friday the 13th in September, there will also be one in December.

I also once had to explain why Halloween could never fall on Friday the 13th.

The academic job market for professors has been horrible for decades. It’s not a new problem.

Just saying because when I hear people complain about having a PHD and not being able to get a faculty job.

WTF, didn’t that come up during grad school?

7. I bet there are so many things like this.

If you hold down the Windows key and press the left or right arrow it will snap the open window to that side for multitasking.

8. Nobody likes a bully.

Crows chase birds of prey – some small birds will do it too.

There are pictures at work of raptors getting mobbed by smaller birds and I’m always surprised when people are amazed by it. It happens fairly often in my neighborhood.

Platypus lay eggs but are mammals.

My aunt had to check on google for my dad to believe me lol.

I knew this ever since I was a kid because i loved reading about animals and always thought it was common knowledge.

10. You know which of your friends to ask.

Apparently, the difference between “your” and “you’re”.

saw “to” mistaken for “two” yesterday, I had to close the app.

When you get added to a Facebook group with thousands of members, there is absolutely no need to make a post thanking everyone for letting you join.

I’m definitely not the only one. But there is a big gap between those working in the medical/scientific community and the general public.

For example, a lot of people don’t realize the huge biological differences between different cancers.

One drug is never going to cure all cancer types.

Every instance is different.

13. So we should capitalize it?

LASER is an acronym for “Light Amplification by Stimulated Emission of Radiation”.

14. And it happens quite often.

The moon and the sun can be in the sky at the same time.

Yeah. On almost any given (obviously not cloudy) day you can find the moon.

The amount of people who don’t refuse this despite literally being able to look at the sky and see it is amazing.

Often, when I mention something about the multiple moon landings (manned flights), some people think there was only one landing (and that it was probably fake).

I only learned this a few years ago. It makes sense but, nobody ever talks about the subsequent ones.

17. We learned this from the movies, yeah?

In a formal meal where there are multiple forks/utensils on both sides of the plate, they’re placed so that you can work from the outside inwards for each course.

If you hold open a door, don’t do that by standing in the doorway.

i’m kinda short and i’ve had people do that to me, expecting me to walk under their arm? it’s so stupid. just get out of my way!

Va*inas don’t get “loose” from having s^x they snap back into place pretty easily. If someone with a va*ina felt loose and easy to be “in” during s^x it meant you were doing a good job and they were aroused.

Also, if someone has long labia minora (inner labia), that does not mean they’ve had a lot of s^x or a lot of partners. It’s just genetics.

Vulvas come in a wide range of sizes, shapes, and colors, and p*rn doesn’t always do a good job of showcasing that diversity.

Air Force One is not the name of the aircraft, but the call sign for whatever aircraft the president is onboard. ( I’m in the uk).

Just planes, as far as I am aware.

I know that the Secret Service refers to the presidential armored limo as “the beast” due to all of its crazy customizations (it’s effectively just a rolling bunker), but I believe that is what they call it whether the president is aboard or not.

It wasn’t made up any more than English or Taiwanese is made up.

Not misunderstood, but misinformed on purpose. McDonald’s strategically made a campaign to make people believe that the woman made a big fuss to get filthy rich.

Thing is, it really worked.

On the news, movies and TV shows they used that story as jokes on how to get rich easily. McFck McDonald’s.

Saying we use 10% of our brain is like saying we only use 33% of a traffic light.

That a singular spaghetti is called spaghetto.

26. There are mnemonic devices.

The order of the planets.

The difference between Quarantine and Medical Isolation.

Apparently, I was the only one in my office who knew that CTRL SHIFT + rotates your document 90 degrees.

Idk about other people but the people around me didn’t know that the sword in the stone king arthur pulled out isn’t excalibur it’s caliburn and he gets excalibur later on.

Likewise a parsec is a length, not a time. Just admit that Han Solo got it wrong because the script got it wrong and stop trying to retcon it.

Cows can climb up ladders and stairs, but can’t climb back down.

Useless knowledge: Most cars have a little gas pump symbol next to the fuel gauge with a little arrow that shows you on which side of your car the gas cap is.

At least in my home country, lmk if you’ve seen it!

33. English doesn’t have to make sense.

Its spelled paid not payed.

I really don’t understand how it was so rarely misspelled a few years ago but now I see it spelled incorrectly every day.

The sign that say “Slower Traffic Keep Right” is usually in some kind of hieroglyphics to the people I share the road with.

If you’re pluralizing a word such as, for example, “sister-in-law,” you pluralize the root word; so it would be “sisters-in-law.”

36. Driving and reading are hard.

Our highway has signs that read

“keep right except to pass”

“move to the right lane and let others past you”

Influenza is an upper-respiratory virus.

Plenty of people know this, but absolutely no one did in my entire radiography class, Including the instructor. We all had to take Anatomy and Physiology 1&2 before being accepted into the program.

Everyone in the classroom thought it was a GI virus or what people refer to as the ‘Stomach flu’.

I once joked to co-workers (U.S., avg age 50) that “I speak Esperanto like a native” and was met with silence; nobody had ever heard of Esperanto.

Note 1: This was a number years before the appearance of the excellent Saga graphic novels, in which the inhabitants of Wreath are all shown speaking it.

Note 2: I learned years later that there are a few native speakers, mostly in multilingual households where Esperanto is the only common language.

That you don’t freeze in space.

The amount of people that think you’ll freeze or even explode in space is crazy.

Holding the the space bar and moving your finger on an iPhone moves the cursor anywhere you want it, while typing.

Some of these were definitely (very cool) news to me.