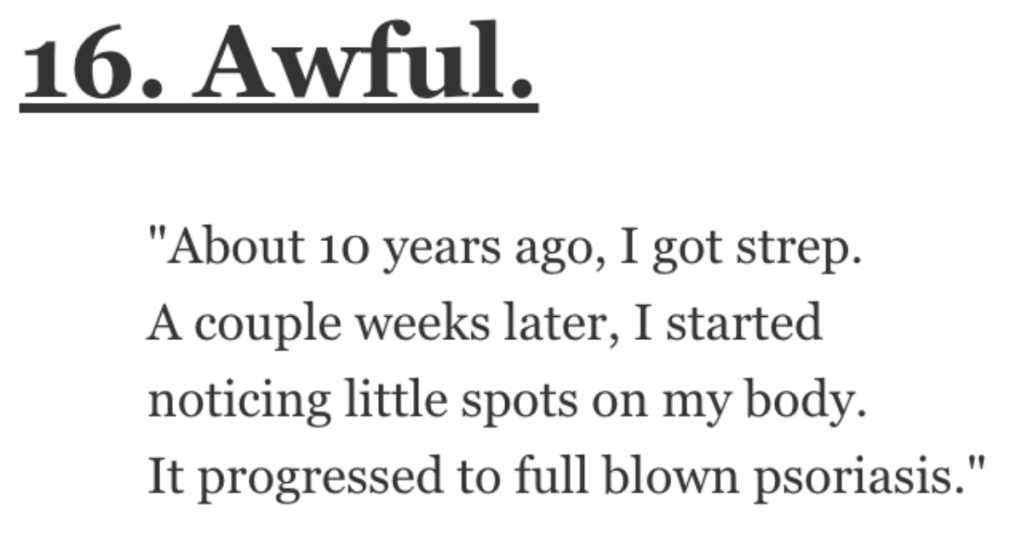 When Did Your Body Betray You? People Shared Their Stories.

Your body is going to betray you if you live long enough.

These things are not made to hold up against the march of time, or, you know, against extreme scrutiny or like, embarrassment for days on end.

Chances are you remember a few times your body had the wrong idea, and these people definitely have experienced some doozies!

It’s an endless cycle that’s been going on about 8 years now.

2. Where no one wants to live.

When I became a resident of Diabetesville.

3. When your back says nope.

On Monday when I lifted my 105 lb Lab/St Bernard mix in to the back of my truck, along with his 80 lb sister.

Come to think of it, that may actually be when I betrayed my body.

4. Get with the program.

When my T cells started attacking my brain matter and spinal myelin.

Me and a similarly disabled friend spoke about this months back, re:covid.

They said that the difference between disabled and non disabled people really boils down to this: abled people can trust their body.

They can trust it to have energy, to fight off sickness, for the kidneys or heart or lungs to work… And many disabled people don’t have that luxury.

They have to be constantly ready for it to break down. It’s like driving a sh**mobile on an empty highway and just praying you make it to the next gas station.

They said that was the most infuriating thing about the covid response, that so many people took their bodies vigor for granted.

6. I think their body actually saved them.

I was a functioning alcoholic for a long time.

To my detriment, I became quite good at hiding my drinking.

That is, until the alcoholic pancreatitis, the swollen liver, and the .50 BAC when I was brought to the hospital.

Addiction isn’t a joke. (that all was 8+years ago, I’m 7 years into my sobriety journey with 5 years of full sobriety)

At some point during puberty my body decided it would be cool to grow extra thick hair on my butt cheeks.

On the night before my wedding. I got the worst food poisoning imaginable (made the mistake of having ice in my drink in a country where the water was NOT safe to drink) and spent the entire night & the majority of my wedding day puking and sh**ting uncontrollably.

It was a destination wedding, just my husband & I….all alone in a hotel in beautiful foreign country….the language of which we did not speak. Luckily, we had the most amazingly kind hotel staff do everything they could to help us….whilst laughing hysterically pretty much the entire time.

I was so sick that I actually lost several pounds and had to be sewn into my wedding dress the next bc it was falling off of me. I was too weak to stand much less walk, so I was carried to my wedding and literally held up for the ceremony by the hotel staff. We had to pause saying our vows several times so that I could vomit into a bucket. I obviously was unable to eat any of my beautiful wedding cake, drink a glass of champagne or consummate my marriage on my wedding night.

It was awful but we laugh about it now. My husband calls it our s**t show of a wedding.

It’s been systematically betraying me since forever lol.

I was born with a small birth defect where my ankle bone didn’t separate properly or had some kind of extra bone, don’t remember specifics, but we didn’t find out until after years of ankle pain usually thought to just be sprains. A massive cyst formed over top of it and displaced my nerves. I had surgery at 16 to remove the whole mess.

Last year, I developed fibromyalgia, so I wake up every morning feeling like I just got out of a car crash.

These last two months, I had some kind of persistent vomiting for a good while. Still having trouble eating. Still haven’t figured it out.

And, oh yeah, on top of that….my body regrew the ankle bone coalition that was removed four years ago.

I think I killed my body’s father in a past life.

First week of December during grade 9 I got really bad flu. We’re talking I couldn’t even keep down a little bit of water.

Fast forward one month and I feel very odd. I’m drinking tons of water and passing like a racehorse. I pee the bed occasionally, my mother says I look like I’m going to die.

We go to the doctor and after a blood check, I’m found to have a blood sugar level of 25 mmls. I am then diagnosed with type 1 diabetes and sent to the hospital to get my sugar under control as well as get educated on whats happening to myself.

Thats where the doctor told me how I most likely got the disease. See, nobody in my extended family and I mean not a single person, has type 1 so that immediately rules out it being hereditary.

The doctor says, “its mostly a theory but seems to be the main observed reasoning behind it, but when you were sick your body overreacted to destroying the illness, and the little cells in your pancreas that create insulin well they look kind of like foreign bodies so your immune system went in and cleared them out. For a time you’ll still have some natural insulin production but your body will eventually kill the rest.”

My rheumatoid arthritis came after a bout of mono.

Happened to a lot of people I know.

It’s not just anecdotal, there does appear to be some science behind the link, although mono isn’t the only illness that cause trigger the genetics for it.

It’s called an oral allergy. I cant eat any fresh fruit with a core (apples and pears) or a pit (cherries, peaches,etc).

Started at puberty with cherries and slowly the list grew over the years. It sucks because my symptoms aren’t even that bad, but if you keep pushing it, your body can develop an anaphylactic response 🙁

A couple weeks later, I started noticing little spots on my body.

It progressed to full blown psoriasis.

Ever since, I have been more or less covered in spots. It has made me very insecure.

It was years before I would wear shorts.

I haven’t had a date in almost a decade. I’m not unhappy…just can’t reckon anyone would ever be attracted to me looking like this.

14. There’s no reasoning with the brain.

That feeling when you’re so tired that you can’t get comfortable and you just spent a few hours rolling around going “mrrrmph… hrrrrng…. mraAAAAAAW…”

A few weeks ago, I noticed that getting up in the middle of the night to pee is a nightly occurrence.

Since then, I’ve tried limiting my water consumption 30 minutes before bed, then an hour, now an hour and a half.

I STILL get up in the middle of the night to pee no matter what.

16. Those things are all defective.

I discovered at 19 that I have a gene mutation that causes random melanoma tumors in my body.

At 21, I learned I am a literal mutant, but instead of it giving me cool super powers, my body develops tumors.

18. Food allergies are so scary!

Mid way through a lobster dinner, when it decided I should now be allergic to shellfish.

19. The wrong sort of miracle.

I was just shy of 21 when I discovered I have a disease I shouldn’t be able to have.

My bone marrow is calcifying and making my spleen and liver a bit too big.

It really sucks getting news like that so young. How are you these days?

20. I hate to think about this happening.

I love cats. I cannot have a cat anymore.

And now I’m starting to get allergic to my dog that I love with all my heart.

It sucks, but I put up with it.

A year ago I had a slight head cold and flew home for Christmas.

My ear was clogged and wouldn’t pop.

I landed and still couldn’t get it to pop. 3 specialist visits later, they’re like “yeah something is messed up but we don’t know how to fix it”.

Living with an ear that won’t pop is a special kind of hell.

I can do neti pots or have a great yawn where it will be clear for a couple seconds but then it just closes again.

At 25 years old, I had my first ever seizure. It was a 10 minute grand mal seizure, in a restaurant, no less. Almost 14 years later, numerous med combos, dozens of seizures, side effects, and a brain surgery later, no answers.

It sucks to know there is no cure, side effects are monstrous, and people don’t understand bc you don’t “look sick,” but after they hear the words epilepsy or seizure disorder- let me tell you, you’ve never seen people run so fast.

However, I am currently 23 months seizure free on my current med combo. I have maintained my career successfully over the last 16 years and I am going back for my second masters degree program in January.

Earlier this week, I subluxated my left shoulder and my left hip. On different instances.

When I used to do a lot of long distance cycling I would do some leg training in the winter so I’m ready by spring.

Well, one time after doing a workout, I couldn’t get up from the toilet.

It was pretty bad.

A few months before turning 24, woke up blind on one eye.

Turns out i have multiple sclerosis.

2. All of the delicious foods.

I loved eating apples, pears, and cherries until I became allergic at age 22 – mild symptoms including an itchy throat means it is no longer worth the taste.

Halloween, 2014. Felt great, getting ready to go to work when suddenly I’m puking.

Puke for 3 days. Have been nauseous for 6 years now, waves of intensity, but it’s never gone.

About 4x a year, I have 3 day long puke fests. Randomly throw up, too. Wear a transdermal patch and a reliefband all day, every day, to be minimally functional. Survive on ginger ale (I don’t even like ginger ale.)

Oh, and my body won’t tell the doctors what the hell is wrong with me, so no diagnosis. On the plus side, if you need some tricks for calming down nausea, please ask, I know them all.

Man, not looking forward to the next time this happens to me.

Tell us in the comments about a time this happened to you!