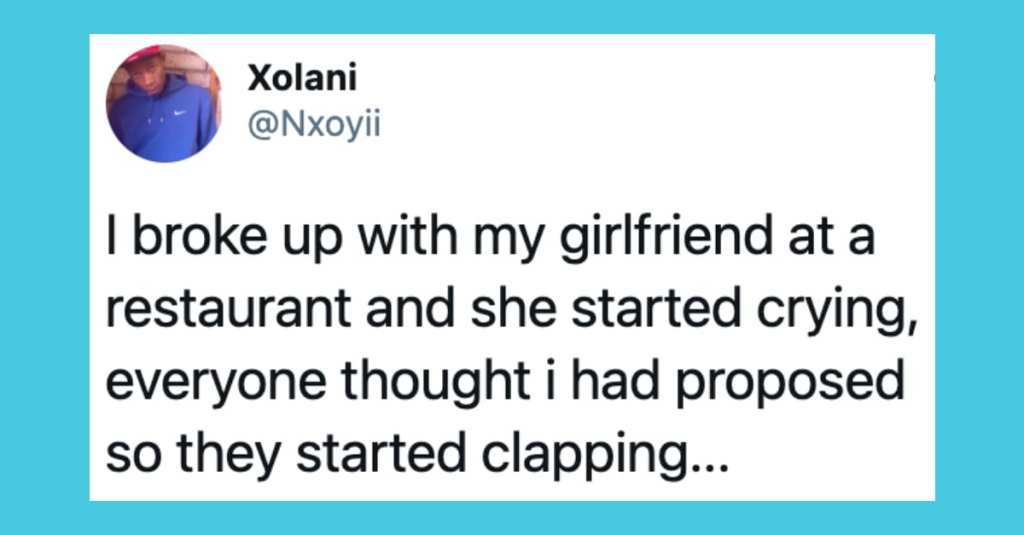 I gotta say…I kind of feel sorry for the people who were involved in these extremely awkward moments.

Try to put yourself in their shoes, ya know? That’s usually a good way to get some perspective…

BUT, I will say that I laughed out loud and was thankful that these things DIDN’T happen to me, because they are pretty hilarious.

Am I petty? Sure. Am I a terrible person? That’s debatable.

Enjoy these funny encounters! We think you’ll love them.

Congrats to you two!

I broke up with my girlfriend at a restaurant and she started crying, everyone thought i had proposed so they started clapping…

2. Not what they were going for.

christian is his NAME

May I pet your muffin?

At that point, you kind of have to say yes to the person…

5. Are you sure about that?

Well, this explains a lot…

I wonder if it worked…

Scammer tried to scam 20 random people at once from facepalm

7. That was supposed to be a secret!

Well, the hamster is out of the bag.

at Dick’s, it is a habit of mine to ask customers if they want their items in a bag after they check out.
today, a woman came up to the register with 2 kayaks to buy.
after ringing them up, i looked her dead in the eye and said “would you like these in a bag?”

Did they let you on the plane after that?

I was at the airport and the TSA agent told me to scan my license face down, but I just heard “Scan your face down” so I put my face on the scanner and waited. I wish this was a joke but no, it happened and the TSA guy could not stop laughing and now I have to go into witsec. pic.twitter.com/PmXikadxTg

10. This is pretty uncomfortable.

Do you remember their name?

Hey, we’ve all done this at some point.

I blanked when I got to the counter at Starbucks and said “vodka soda” and she said “huh” and I said “huh” and then we stared at each other until I remembered I was there for coffee.

I often think about the time my ex thought I was cheating on him with a craft store pic.twitter.com/wPBsprSrLm

What’s the most embarrassing or awkward encounter you’ve ever had with someone?

Tell us all the good stuff in the comments. Thanks!