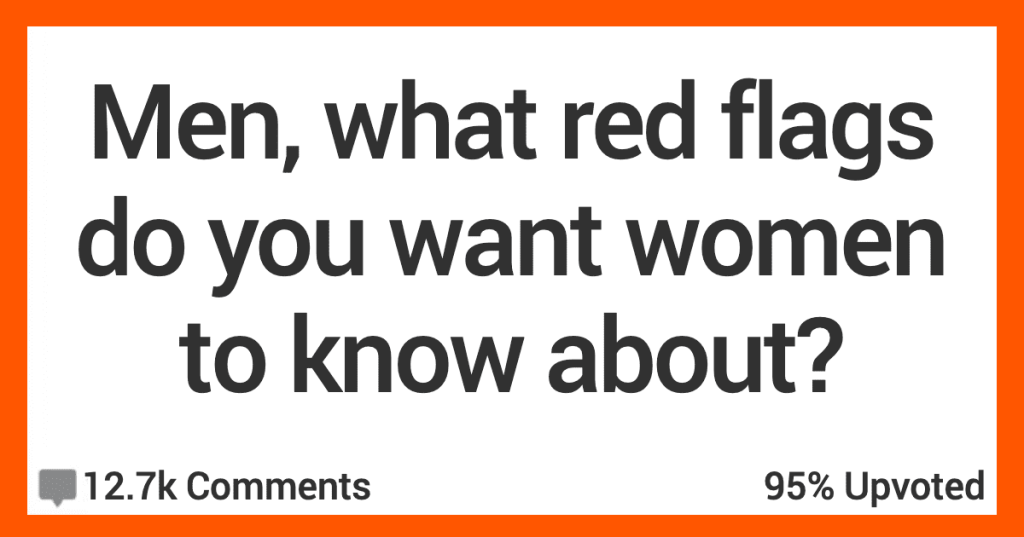 Ladies, we want you to listen up today.

Because a bunch of fellas went on the record on AskReddit to share the less obvious red flags about men that they think you should be aware of.

So let’s see what they had to say!

“This is something I’ve tried to teach all my daughters. Men will show you how they feel with their actions.

If they say they care, but don’t put in the effort, listen to the actions. Not the words. Good advice for dating but also good advice for life really.”

“Many many men only know how to “relationship flirt”.

They will say things like “I’m looking for something long term” when really they just want to hook up.”

“A friend of mine dated a guy who apparently everyone wanted to fight.

At the gym. “This guy over here want to throw down.”

At a mall. “Those guys look like they want to get hit.”

At the grocery store. “This dude is looking at me like he wants to go outside.”

No Steve. No one feels like fighting you. You are just on steroids.”

“As someone who is VERY guilty of this: focusing a ton on you and your needs, but hardly paying attention to their own.

Someone like this can come across as sweet, selfless, and caring, but they’re actually avoiding their own problems to focus on yours.”

“Any aversion to taking responsibility.

The older I get the more I find that the men I respect most aren’t the ones with great achievements to theirs names, but rather the ones who aren’t afraid to own their s**t.”

“When you have to cater to his needs/wants over your own with no compromise.

It can be something as only watching shows that he wants or doing things only he wants to do or ordering takeout that only he likes.”

“You’ll be able to tell if a guy is nice by how he behaves.

If a guy tells you he’s nice, ignore that. That’s meaningless.”

“If he believes relationships without arguments or screaming matches are doomed for lack of passion, he probably hasn’t learned to communicate in a healthy way.”

“If he isn’t on the same level of maturity of you, regardless of age, don’t go for it.

One of you will turn into the parent.”

“If they verbally attack you in an argument rather than discuss the issue.

If they constantly s**t talk other guys.”

“If he’s dumb, but he thinks he’s smart.

A smart person is one who isn’t afraid to say “I don’t know” then “let’s look that up”.”

“If he starts throwing tantrums over petty things, there is worse on the horizon.

Guys, what do you think about this?