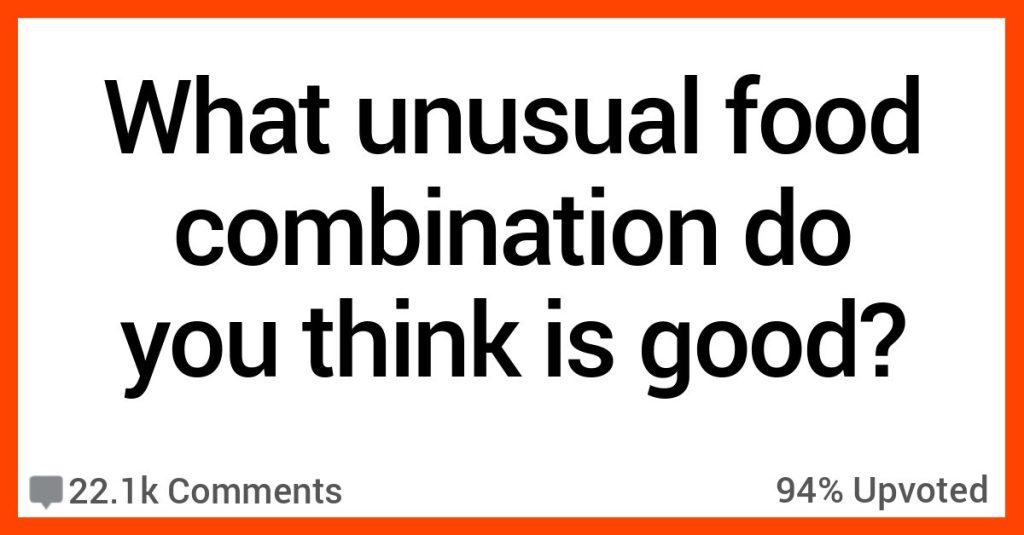 People Swear That These 29 Food Combinations Are Delicious

Some people will try anything and will eat anything you put in front of them.

Other people are picky eaters and will choose from a small menu, happily, every meal for the rest of their lives.

Most of us fall somewhere in the middle, and almost everyone has a favorite food that other people might not have thought to try.

Here are some food combinations that people swear by, so keep an open mind.

I was in middle school on a field trip, last in line at the cream shop, and ordered this after everyone else had done the standard root beer and vanilla. One of the cool girls who had never spoken my name before gave me this piercing look and asked if I would switch with her.

I instinctively knew I would get zero benefit from this deal, so I said “Nope, ya gotta just remember it next time.” That felt good.

2. Hummus is a universal food, I guess.

I already posted but I’m eating pizza with my friend right now and he likes his pizza with hummus.

I’ve recently tried lamb shawarma pizza which had tahini as one of the toppings. It was all types of good

A guy at work introduced me to dipping a peanut butter and honey sandwich into chili. That was surprisingly great.

A cube of cheddar and a cube of pineapple on a cocktail stick is actually a very common “buffet” snack at crap family parties in the U.K.

The fat from the bacon really brings out the fat in the peanut butter. Oily goodness.

6. Depends what goes in your pierogi.

Most people in my life have never heard of a pierogi before. It makes my heart sad.

Hummus and salsa mixed together with tortilla chips.

Peanut butter and cheddar cheese (like the proper brick kind, not kraft cheese slices). When I was a kid I sometimes made myself pb and cheese sandwiches. They’re very filling, but delicious!

When I was growing up, it was standard procedure for us to put grape jelly on scrambled eggs. I did it when I went to college and everyone at the table stared at me. I still like it.

With red onion and balsamic vinegar. Plus basil. Delicious.

My coworker said “I am so excited to eat my peanut butter, jelly, and cheese sandwich!!”

It took myself and two other coworkers about ten minutes to convince him that no one else eats cheese on peanut butter and jelly sandwiches. He was baffled.

Midwest USA and I’ve only met one person who did this other than me and she was Swedish! lol We became best friends of course.

When I went to Europe in the 80’s, it was all mayo, mustard and vinegar on french fries. No tartar sauce.

Chili and a peanut butter sandwich.

Southern Ohio here and everyone eats it like that. I’ve even been to county held chilli cool offs and there’s always peanut butter sandwiches around. Huh today I learned.

My mom swears by jam (jelly) and ham sandwiches.

My husband and I both grew up eating PB and syrup on our waffles. We took that as a sign it was meant to be.

16. Try Vegemite at your own risks, non Aussies.

Vegemite and honey. For all you Aussies out there who haven’t tried this yet, you’re missing out.

Peanut butter and real butter. My grandma used to make it for me and it tastes great.

This is actually a trick that doctors will use to get underweight children to gain weight, peanut butter and butter sandwich. Something about how much fat is in it.

Sometimes I make toast with peanut butter and then just squeeze a thin ribbon of sriracha on top. So good. Like a spicy Thai peanut sauce.

Chocolate and salt and vinegar crisps.

Add some turkey, apple, and any sharp cheese between some nutty whole wheat bread and pop that sucker on a panini press and DAYUM. You got lunch.

I personally think hot apple pie with a nice thick slice of cold extra sharp cheddar is the best combo. You get a better texture contrast and the cheese holds more flavor.

I eat my sushi with the pickled ginger that comes with it. Tried it the first time I had sushi because I didn’t know any better, liked it, don’t care that it’s the “wrong” way.

Its legit for a lot of rolls and cheap sushi. I get why its taboo for nice sushi or sashimi though. Its a shame for quality fish to be covered up by the strong pickled ginger. Sometimes you gotta have the shit like gollum, no stupid fat hobbits ruining it with fixin’s.

I want some sushi now… Anyone out there who likes fancy rolls more than sashimi should try rolling their own maki. By doing it yourself once you could save enough to buy a rice cooker and some mats. Always put plastic wrap on the mats, rice starch is a bitch to unstick.

Eating fresh tuna sashimi a coworker caught straight up is still maybe the best food I’ve ever had the privilege of trying. If your fish is great quality but still tough and bland it might be too fresh, give it a bit.

Mustard with scrambled eggs. Actually I haven’t had it in a while but from what I remember its really good.

You need to try a sandwich I made. One egg, two if really hungry, cheese slices, mustard, all on toast. Best thing I’ve ever made

Just watermelon. Under appreciated fruit fit for a king

Peel a bunch of garlic – like 3 or 4 cloves. Throw it in a mason jar and fill that to the brim with honey. Let the air out every day for a week.

Then let it sit for like 3 months. Put that shit on any pizza crust you make. Trust me.

Salami wrapped around a sweet gherkin w a smear of cream cheese.

This is a potluck staple in the Midwest US. Salami or ham around a pickle with cream cheese.

I had a babysitter make me a PB and dill pickle sandwich 30 years ago and to this day I still eat them, or just spread crunchy peanut butter on a dill pickle. Yum.

I think I would try some of these – they sound odd, but still delicious.