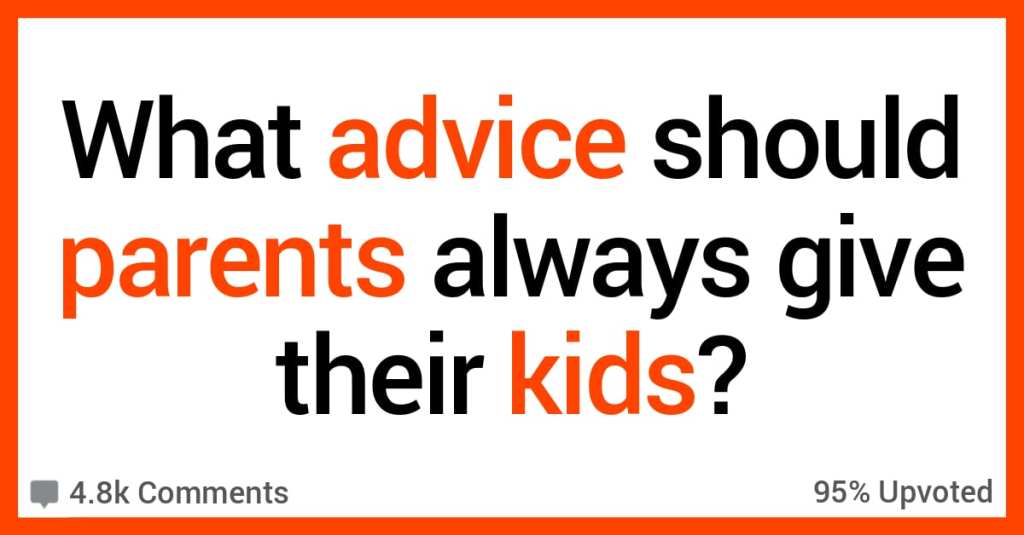 12 Parents Share the Important Things They Always Tell Their Kids

Kids like to think they know everything, and that’s where parents have to be REALLY patient with them. Along with that comes the ability to slip good info in there when it’s needed.

You don’t want to be overbearing… but you also want to reinforce that YOU are the parent and they can learn something from you.

These 12 parents (and kids) share advice that they got from their parents that have made all the difference.

“I don’t care if you get too drunk at a party as long as you tell me and I can pick you up. I won’t yell, I won’t punish you, as long as you are responsible and it doesn’t happen all the time.”

In my opinion teaching your kids it’s okay to be a bit rebellious, make mistakes, and live their life in their teens is a good thing to do. I never had a reason to not trust my mom because of this. Ofc I got consequences for some things, but if I ever made a mistake and needed her, she was there.

Admitting they can be wrong sometimes. Parents are humans and make mistakes. Kids need to see that.

My manager was momentarily irresponsible with a bit of machinery which i work with daily, and i told him that he shouldn’t use it the way he was trying to use it. He snapped back at me and said “I’m the health and safety officer for this building so if i decide it’s okay, it’s okay”. I disagreed, and he said “Then we’ll have to agree to disagree!!”. I disagreed further and told him that i cannot let this argument end on us agreeing to disagree: he had to understand that if i’m not comfortable using equipment as it wasn’t intended – equipment that only he and i are qualified to use – i’m not going to use that equipment.

He was most upset.

Later, maybe after thirty minutes or so, after he’d left me to finish up on my own as i’d asked, he came back to my work station and without pausing or breaking the ice he said jumped straight to: “I need to apologize to you. You’re right. I should not ask you to [use equipment in a way other than intended] and i’m sorry for doing that.” I told him i really appreciated that. I know he meant well – he was trying to save me some time – but either one of us could have lost a hand.

If you make a mistake and need help, come to me.

Kids tend to make bad situations worse by trying not to get caught.

I know way too many people who got in drunk driving accidents because they were too afraid to call their parents for help and drove home or got in the car with a drunk driver.

There are good secrets and bad secrets.

Bad secrets that make you feel unhappy don’t need to be kept a secret. You either can tell me, grandma, or your teacher, and we all will work together to make that secret go away so you can feel happy again.

5. This is REALLY important

Your child might grow up mistaking abuse for affection.

If he’s at school or whatever and a girl is physically attacking him then it’s ok to use physical self defense. As long as it’s reasonable self defence then we will never punish him for using it in the correct scenario. (Obviously de-escalating is the first port of call.)

Oh, also! It’s ok to walk away! It doesn’t make you less of a man to walk away from a fight if you can, and walking away should always be a first resort. Then try to de-escalate if you can’t walk away.

Then use physical self defense reasonably.

“Childhood is like being drunk. Everyone remembers what you did except you. So be careful.” – My dad.

“You don’t have to earn my love. Nothing you do will ever make me love you any less. I will ALWAYS love you, no matter what.”

I say these three lines to my kids so often!

9. Learning from your mistakes

It’s alright to fail, as long as you pick yourself back up and learn something from it.

And that you still love them no matter their grades and their beliefs.

At least that’s what I wanted to hear from my parents.

I’ve talked about consent very early with my kids (they’re 4 and 7 now), and it’s honestly super easy to explain and demonstrate in an age appropriate way.

My 4 year old loves being tickled, finds it absolutely hilarious. So we have tickle-fests, and I make a point to stop when he’s laughing too hard to talk and ask if he wants me to keep tickling. Toss in a “Okay, I just wanted to make sure you were still having fun! Raaaar, the tickle monster is back!” and boom, now you’re modeling checking in and continuous consent. The second he says no, full stop.

They need to politely greet and say goodbye to people (the host if we’re visiting friends, plus grandparents, etc), but they do not need to allow physical contact that they don’t want. Wave and “bye Ms. X, thanks for having us!”, handshake, etc is fine. Absolutely no guilting from people if they don’t want a hug or whatever.

Both are super affectionate with their friends (and each other), so I’ve had plenty of opportunities to remind them to ask before they hug, just because they wanted to hug/ hold hands/ whatever last time doesn’t mean they do this time and that’s okay, just because that’s your sibling doesn’t mean you can do whatever you want, etc.

Basically, it’s not just a one time “no means no” explanation; I feel like modeling it consistently is really important and sometimes gets overlooked a bit.

11. You don’t have to participate

You should not feel like you have to be uncomfortable or forced into something just because someone else wants it.

My grandmother was the worst about demanding things because she wanted them and everyone owed her.

It made me despise her and it made me angry that my mom would just go along with it.

I’m not a parent but something I wish my parents would of told me before graduation is that, even though I have friends in high school to always have it in the back of my mind that they were going to move on after high school and so was I.

Whatever happens in high school is just a small moment in the timeline of your life. As important as it seems during the time, in the end it really doesn’t matter.

It’s different if it is a big life decision like tests, picking your next level of education, jobs and family matter.

So, have you learned anything you’d tell your kid that you haven’t?

Let us know in the comments! Or let us know some advice you’d give them!

Pls and thank you!