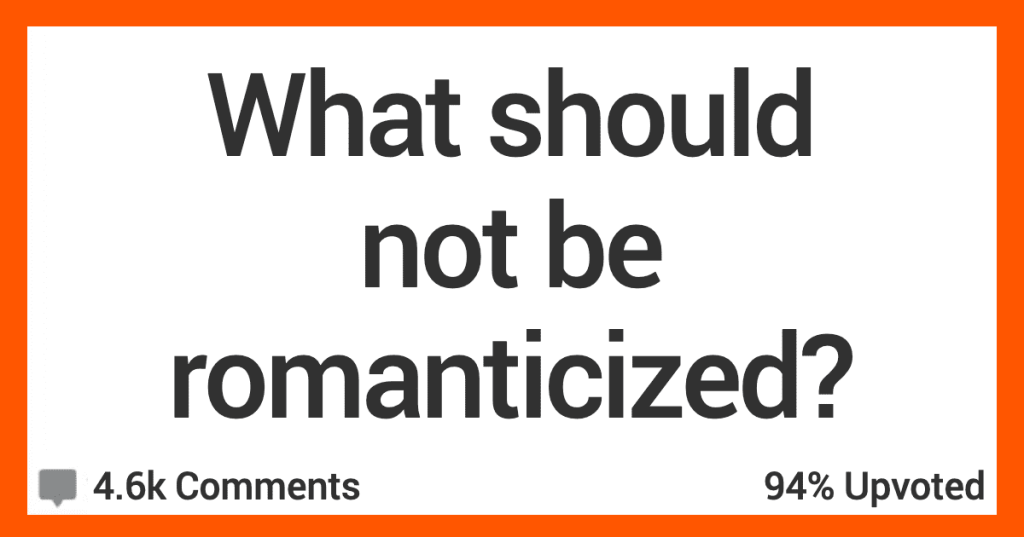 12 People Admit What They Don’t Like to See Romanticized

We’re so inundated by pop culture these days that all kinds of inappropriate and downright negative things are romanticized.

And today we’re going to hear from folks on AskReddit about what they don’t like to see romanticized.

So much of this “passion” is terrible emotional management and terrible communicative skills bordering on (or actual) a**se.”

If you’re born into it, raised by the streets, props to you for living this long. Hope you make it out one day.

If you’re not. DONT. Just don’t. Eff off or end up as another chalk line on the pavement.”

Despite what media thinks they are not a bunch of well dressed dudes with strict moral codes, they are violent idiotic thugs being controlled by a small group of less idiotic thugs.”

“As someone from Colombia, it really pisses me off the fact that foreigners, tourist traps and the local media romanticize drug dealing.

Seeing so many merchandising of, for example, Pablo Escobar, a total piece of s**t that did nothing but turn Colombia’s streets into literal warzones while “serving ‘prison'” by living in a f**king mansion with everything he could have asked for and coercing the government to turn the country into a narco-state, portraying him as a “savior” or a “man of the people” is offensive with his victims, both in Latin America and the developed world, and the country he did everything to try to destroy.

How would Germans react if one called Hitler “the savior of Germany”? That is how it feels when I see people idolizing this mf’er.”

“I work with YouTubers.

I worked with a vlog family a few years ago with very young children. It was legitimately child ab**e. Not screaming at them or hitting… but like.

Forcing them to perform on camera when they’re crying and cranky. It was awful. Lasted a week. Questioned it. Got the boot.”

If they saw the messy rooms, felt the genuine emptiness, and all the other s**t that came with being mentally ill, they would (hopefully) stop romanticizing it.”

It makes my blood boil anytime I see people do this.

I had anorexia- it almost k**led me- it is disgusting people think this is ok.”

It can be terrifying for every party involved.

It almost destroyed my family.”

No, you’re not better than me because you haven’t slept in 3 years.”

Hawkeye: War isn’t Hell. War is war, and Hell is Hell. And of the two, war is a lot worse.

Father Mulcahy: How do you figure that, Hawkeye?

Hawkeye: Easy, Father. Tell me, who goes to Hell?

Hawkeye: Exactly. There are no innocent bystanders in Hell. War is chock full of them — little kids, cripples, old ladies. In fact, except for some of the brass, almost everybody involved is an innocent bystander.”

I’m 21 and this is kinda for the younger generation. Kids 16-18 idolize it a lot and I’ve had my fair shares of parties, drug binging, and addiction but it’s really not a cool path and it’s kinda sad how it’s glorified and how deep the kids get into it without realizing it’s to late.”

“People saying something a little out of line is playing with their “OCD”.