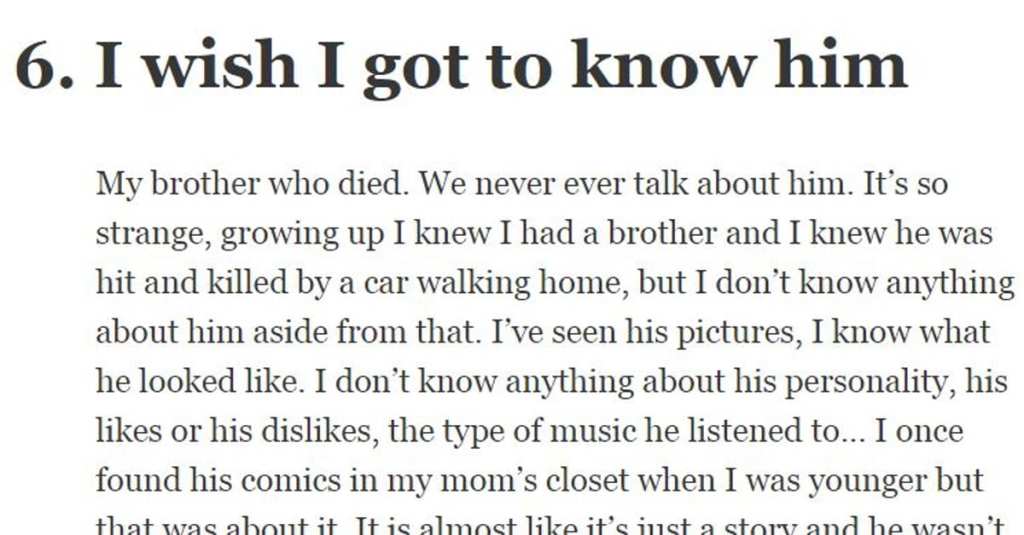 Does your family have a dark secret? A person or story from the past that makes the entire table go silent whenever it’s brought up?

Well, these 12 people’s families certainly do, and they’ve decided to share the weirdness on Reddit. It’s no wonder their families don’t talk about these stories…

1. They named me after him

30 years later old fuckwad Grandfather is dying, and has explicitly cut my mother out of his will, and left a (considerable) amount of money to her two brothers.

Coincidentally at the same time I’m born. So they name me after him, a literal monster.

It worked, I guess, they got back in the will.

So yeah, when people ask me how I got my name I just make up some story about a poet or something, because the real reason kinda sucks.

Apparently our dad had another kid about 8 years older than me. My mom blurted something about it after their divorce when she was pissed about something. It was along the lines of “if he thinks he can forget you exist like that other kid of his…”, she then turned very white and I was never able to get more out of her than that. My dad pretends he doesn’t know what I’m talking about but has apparently told my brother a bit of the story and then backtracked and never talked about it again. So yeah, apparently I’m not the oldest.

My sister… pretended to be me when she got arrested. Jokes on her, she paid the fine and when it was found they didn’t follow proper procedure they refunded the fine to me! Karma…

We had a centralized vacuumed system in my house growing up. Mom caught me “laying next to it”. With my pants down.

The fact that my cousin got kidnapped when he was a baby. Long story short, two young teenagers got knocked up, got married, aunt wanted a divorce but husband was abusive and manipulative, and she fled out of state back to us (her family). He followed her to try to talk it out, she let him inside to talk, he took my baby cousin who was sleeping in her arms, and fled out of state. Then he took her to court for abandoning her child and refused to let her see him. 20 years later, my cousin seeks us out and we all reconnect. Thanksgiving dinners are great, but we don’t talk about that whole ordeal.

My brother who died. We never ever talk about him. It’s so strange, growing up I knew I had a brother and I knew he was hit and killed by a car walking home, but I don’t know anything about him aside from that. I’ve seen his pictures, I know what he looked like. I don’t know anything about his personality, his likes or his dislikes, the type of music he listened to… I once found his comics in my mom’s closet when I was younger but that was about it. It is almost like it’s just a story and he wasn’t a real person. It wasn’t until my grandfather died about 11 years ago and my mother and I walked to his grave. She broke down into an inaudible mess, then it really hit me for the first time ever that he was a real person, as crazy as that sounds. I don’t understand that pain of losing a child but it hurt to see my mom mourn like that, almost as if it had just happened. The only time since then he was ever mentioned was by my dad a few months ago. Out of my mother, father and sisters I’m the tallest, my dad told me how the only one of us who was taller than me was Jimmy and how he always seemed to keep growing, how he probably would have towered over me. I almost cried, I wish I got to know him.

A slightly happier story than most here: a few years ago, my sister and I reconnected after not seeing each other for 10+ years.

The split was due to our parents’ divorce being an absolute shitstorm. Neither of us has any desire to reboot what wasn’t our fight to begin with, so we just don’t bring it up.

That New Year’s Eve when my mom tried to commit suicide by swallowing a bjnch of antidepressive pills. For years everyone has acted like it didn’t happen. She doesn’t want to talk about it. Both she and I saw therapists for it.

My uncle raped my mother for 9 years and no one in her family wanted to admit it. My mom noticed behaviors his daughter was displaying and mentioned it, no one believed her. He died. Turns out, he was raping his daughter too.

I’m honestly disgusted with my family, and with her mother. Her mother knew the entire time it was happening, but instead of having him arrested, she didn’t say anything until after he died and then she blew up on the family.

When I was growing up, I always heard stories about my dad as a kid hanging out in his mom’s tavern. The first time we visited his home town, he showed us his house, which is on a crossroads and split-level – front door goes to the top floor, “basement” (or lower floor) opens out the back, which has a small road / parking area and that’s where the tavern was.

His home town is on a road that was considered a “bootlegger’s highway” from Canada. He went through jump school in the same class as Henry Hill (whose life Goodfellas was based on). One night in my teens a friend of his (who I’d never heard of) knocked on the door at 10pm. He and his two buddies (all italian) wanted a place to sleep for the night. They were gone in the morning. His pension and the work he did after he retired couldn’t possibly explain our lifestyle. Mom has forbidden me from digging into it any further.

It was a 6-month marriage to an emotionally abusive woman that ended with infidelity, depression, and homelessness. I’m totally fine now but I don’t ever mention it. So no one else does.

My grandpa has brought the wedding up a couple of times for necessary reasons, but refers to it as “that time we met you in the park.”

My grandfather’s brother was a priest when he was younger. His wife of 40+ years used to be a nun. Their first child was born a few months after they left.