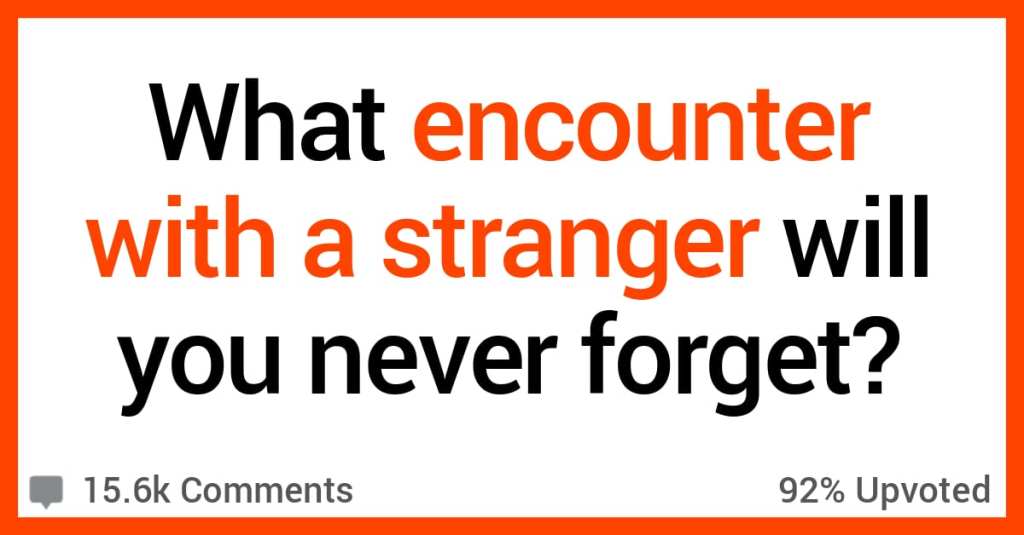 I don’t know what kind of things you were taught when you were growing up, but I remember “Stranger Danger” was a real thing.

We were told to always be on the lookout for shady characters who were trying to do us harm. And, while I appreciate those lessons, there are also a lot of good folks out there who you or I just haven’t met yet.

So keep that in mind, okay?

Let’s dive into some stories about strangers that AskReddit users will never forget.

“I was jogging once and obviously struggling (250lbs, very out of shape!) and a really fit young guy was jogging towards me and shouted “go on girl, you can do it!” and ran on.

I swear I felt like an Olympic athlete after that!

Such a small thing for him to say but gave me motivation!”

“My lost wallet was returned in the mail.

The anonymous stranger sent it back at their own expense ($9.75 postage) with all the money, credit cards, drivers license, and other items intact – nothing was missing.

A note enclosed read: “Please do something kind for a stranger whenever you have the opportunity.””

“I’m a minority born and raised in the south. My family was once taking a family vacation when I was around 12 years old. We had a blowout in Georgia on our way to Florida.

We put a donut on and got to a gas station 15ish miles from where we were, where the donut blew as soon as we were trying to leave and find a Walmart or somewhere to buy a tire. We waited a while, cars driving around us etc, no one helping. Then all of a sudden, you hear loud *ss country music coming nearer and nearer. Then you see it.

It was a lifted 1980s Dodge Ram, with 2 Confederate flags mounted in the back. Dude hops out of his truck, wearing his Confederate flag trucker hat, and flannel shirt with the arms cut off. He is what you imagine when you have to imagine the most redneck person ever.

His belt buckle was huge, he had cowboy boots on etc. Anyway, dude comes over and we are expecting him to be racist af but instead he grabbed some chains and rigged the car to be towed behind his truck, he drove us to Walmart, and bought us a new tire, refusing to let us pay or give him any money for the help and then we were on our way.

I’ll never forget him peeling off singing to some Tim McGraw.”

“In college, I was dating a girl. I really loved her, but I realized that we were incompatible and we had to break up.

So I downed a handle of vodka by myself in my dorm. I was drunk as f*ck, but still feeling sh*tty, so I decided to head to the bars and drink some more.

I actually don’t remember if I made it there or not, but I remember getting off the bus from having come from the bars and was too wasted to continue the relatively short walk to my dorm.

I decided to just lay down where I was at, which was quite literally the gutter next to the railing. Luckily it was an empty gutter, but a gutter nonetheless.

This complete bro dude comes by and sees me laying in the gutter and helps me up. He helps me walk back to my dorm and on the struggle there he asks me what’s wrong. I explained the situation.

I don’t remember much of anything from the conversation, but I do remember him saying something to the effect of “bro, your problems aren’t gonna be solved at the bottom of a bottle”.”

“When I was a broke-as-sin 18 year old trying to make ends meet, I had a side hustle providing IT support for households (like a geek squad sort of thing).

In practice, I would mostly set up computers for elderly people and the tech illiterate, and teach them how to use them … Or get them out of technical binds (usually with printers) by googling on their behalf.

This elderly Korean gentleman hired me to set up his new computer for him; I spent an hour setting it up and teaching him how to use it, and two more hours eating a wonderful lunch with the man and his wife.

He wouldn’t accept my invoice (for just the first hour) — instead, he paid me 3x my hourly rate for all three hours, and asked me to come back to train him the next week.

Over the course of about a month I came back four times, worked with him, had a lovely meal, and he would tell me about his family and his kids (he was so proud of his daughter, who was about to finish her residency and become a pediatrician).

By the end of the month he was pretty comfortable on the PC, and I thanked him profusely for how kind he was and how ridiculously he’d overpaid me.

He told me I reminded him of his son (who was estranged for some reason — I didn’t press), and that he hoped somewhere out there somebody was being kind to his son, and sharing a home cooked meal with him.

I don’t know why, but more than ten years later I can’t think of that guy without tearing up. I hope everything turned out well for him.”

“Took a train to NYC by myself for the first time. I was 18. Second time to NYC, first time ever on a train.

I told the kiosk lady that I’d never been on a train before and asked if she might give me a quick run down of what to do. Another train station employee was nearby and was so interested and amused that I was taking a train for the first time and was alone.

He walked me through what to do, down to the smallest detail. No judgement, no meanness. He was just a guy with a silly disposition, delighting in a young person’s naivety breaking up the doldrums of his week.

I aspire to be that way when people ask me for help. Thanks, Frank P. You were a peach.”

“I was by myself in a restaurant bathroom with my screaming newborn baby. As his cries intensified, I started to crumble knowing that we somehow had to walk all the way through the massive restaurant as the bathroom was tucked away in the back.

A woman close to my age walked in, I apologized for the crying, and she immediately smiled and responded with “don’t even worry about it”. On her way out, she walked up to me and my baby and asked if this was my first. I responded with a yes. She was not a mom herself, but immediately became empathetic to my situation. A

fter a few minutes of conversation, I told her that I was nervous about walking my crying baby through the busy restaurant. She looked at me and said “let’s get you out of here”. She then opened the door and walked behind me softly rooting me on all the way back to my table.

She had no idea how much I needed her in that moment and I’m forever grateful.”

“About 9 years ago I had got my first vehicle and got my license. First day on the road I decide to impress this girl I was talking to and picked her up to go to the mall.

We had a great time and as we were going to leave she starts messing with my nether bits as I’m pulling out of the mall. I’m distracted and turn without even looking. BLAM. T-Boned. My truck was relatively undamaged but the guys car was absolutely f*cked up.

“We call the police that’s all” and in my head that means I’m going to jail or something, so I freak out have a breakdown and start crying. I’m a kid that feels way in over my head. I’m sobbing telling him I’m sorry I wasn’t paying attention and I’m rattling on and on and on.

Out of nowhere this man just grabs me in a huge hug. Like embraced me. Put his hand on the back of my head and said “Bro, it’s all good. Calm down. It’s just a car, we pay out the *ss for insurance for a reason. It’s just an item everyone gonna walk away fine. Homie it’s all good take a breath”

And the dude just kinda….held me for a minute.

No anger, no rage. The police came took statements. No tickets. He got his car towed and his girlfriend came and picked him up.

Right before he got in her car he looked back and said “Pay attention people die every day for carelessness. I’m glad to see you’re alright now”

And I will never ever forget that man. I made sure to bring his mentality into my future life, I’ve got into a couple fender benders here and there not at fault and whenever someone starts freaking out? “It’s just an item”

Thank you for not killing me that day.”

“Was on a solo trip to Amsterdam last year, partying it up as one does.

Was at a bar having a few drinks, and a gorgeous British woman a seat or two over from me (mid-20s) grabs my arm (I’m a very gay looking man by the way) and starts going on about how good it is to see me. I got the hint and noticed an older guy bothering her and her friend, played along with them as their long lost BFF until he left.

We ended up spending the rest of the night bar crawling and getting trashed together, having the best time. I’ll never forget you B!!”

“A few years ago, I was stopping at a red light and there was an old man selling candy.

He approached my car and I was ready to tell him I didn’t want anything, but he motioned me to roll my window down, gave me a lollipop and some gum, and said “to the beautiful young lady, never forget you’re a star” and walked away before I could say anything. Needless to say he brightened my day.

Now, whenever I’m sad, I think about that man telling me I’m a star. Never fails to cheer me up.”

“The woman who pulled over in the pouring rain and talked me down off the railing of a bridge over a Florida highway when I was 18.

She looked like she had just left a business meeting, but she stayed with me for probably an hour, no umbrella, no raincoat, car still running, listening to me, offering words of encouragement.

She truly believed that God had a plan for my life and it wasn’t supposed to end that night. She finally convinced me that suicide was a permanent solution to a temporary problem.

I’m 51 now. I still haven’t figured out what God’s plan is for me, but I’m starting to believe she was right.”

“A prisoner on a Greyhound bus.

There were two of them, but I remember one specifically. Apparently, they send prisoners who are transferring from max to minimum security on greyhound buses.

They didn’t have a guard or anything, and from what she said, they had no motivation at all to run. She had already served 5 years, and only had 6 months left. If she tried to run, she would serve at least 10 more years.

I was 17 and pregnant, and completely broke. I was starving and scared. My life was in shambles, and everyone in my family had abandoned me.

I really wish I could find her and repay her kindness.”

Now we want to hear your stories!

In the comments, tell us your stories about the strangers you had interactions with that you’ll never forget.

We look forward to hearing from you.