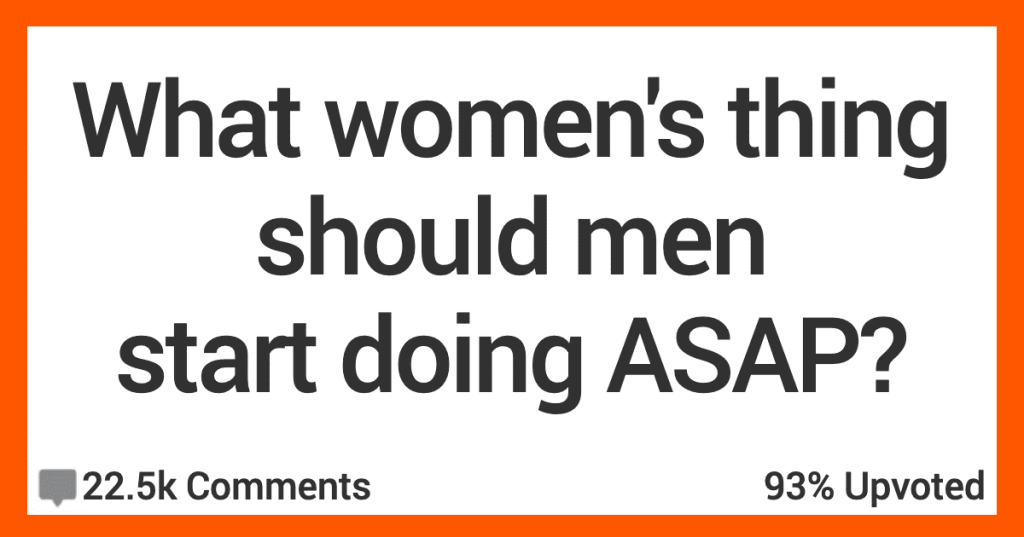 Guys, let’s get real: there are a lot of things that women do that we should also be doing…

But don’t take it from me!

Listen to what these folks had to say about this on AskReddit!

My dad refused to use hand lotion for a while and he kept getting big cracks in his knuckles. The cold would destroy his skin.

He would only put lotion on when it was basically bleeding, by which point it can’t really do much help”

“Getting checked out by a specialist.

There’s a reason colon cancer has a higher mortality rate among men when it’s actually one of the most preventable cancers.

The thought of having a colonoscopy done makes them squirm.”

“Washing your g**itals before s**.

I learned basic sewing to make some bow ties for my wedding and it’s an extremely rewarding skill that allows you to repair clothes, save money, and it’s superb meditation.”

“Putting a blanket on your lap while you work.

I do this with my co workers.

“Looking sharp today Phil” is all it takes to make a day.”

“Now that I’m growing my hair out a little longer, I didn’t know how much I was missing out on not using hair conditioner.”

“Yoga, especially as you get older.

I wish I had started sooner.”

My husband applies sunscreen like it’s the last bottle on earth and he’s afraid he’s gonna run out.

He literally will dip a finger tip into the tiny amount on his hand and put 4-6, tiny dots on himself, rub them in and be SHOCKED when he looks like a lobster later that evening.

He also relies on his chest hair to keep his chest from burning. Spoiler- it doesn’t.”

“My husband never really did pedicures before we met and the fist time I did one for him he was in love with it. I used a scraper to get the d**d skin off his heels (he calls them hooves haha) and he was horrified how much came off.

He’ll even inspect my work now and say “this toenail is a little jagged do want me to look a mess??” He likes being pampered and I’m happy to do it for him!”

“I was trying on jeans for work the other day and I found this magical material that stretches but looks like denim.

I was gushing over them and my wife laughed and said a lot of women’s jeans use that material and a lot of hers are the same.

Men should discover these jeans!”

“Go to the doctor.

My dad never went to hospitals unless it was absolutely necessary. One time he was riding his motorcycle in the country, and he crashed.

Ended up breaking his leg. He was in an area that had no reception, so this motherf**ker WALKED on his broken leg 5 MILES to the hospital.”