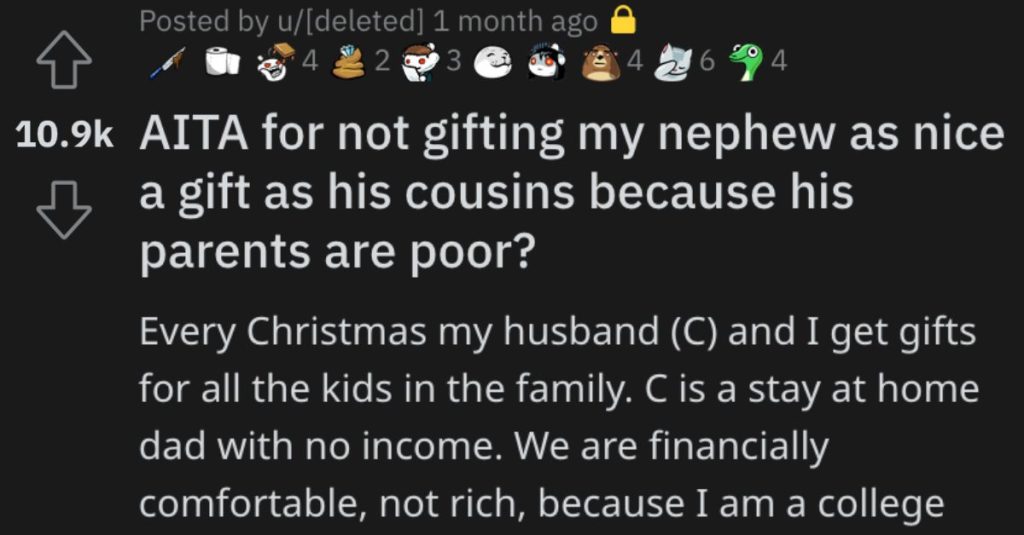 She Didn’t Give Her Nephew Presents as Nice as His Cousins Because He’s Poor. Is She a Jerk?

This just sounds weird to me…

But you never know what you’re gonna get when you read a story from Reddit’s “Am I the A**hole?” page, do you?

Take a look at this woman’s story and see if you think she was wrong for what she did.

AITA for not gifting my nephew as nice a gift as his cousins because his parents are poor?

“Every Christmas my husband (C) and I get gifts for all the kids in the family. C is a stay at home dad with no income. We are financially comfortable, not rich, because I am a college graduate.

C and his family are minority immigrants who mostly work labor jobs. This year while holiday shopping there were six kids total we needed to buy for. The gift we bought for D(19) was above $100. We spend the most on him because we got custody of him at 15 and raised him. D will also buy gifts for C, our child, and I, around $40 each.

There is a sibling group of kids J(10), A(6), M(2) who i bought gifts for. The gifts are all around $30-$35 each. Their parents are both hardworking and always buy our daughter gifts for Christmas. There is an only child U(6) who we spent $45 on because his parents buy us gifts as well and we will be buying his parents around $50 each.

This brings us to L(12). L and his family immigrated here to the U.S. a few months ago. L does not have an easy life as he doesn’t speak English and shares 1 bedroom with both his parents. L’s mom does not work so his dad works overtime but they are hardly making it.

While shopping I picked out a really cheap, $15 Lego set for L. I did not want to get him nothing because that seems cruel. I know his parents do not have money to give gifts back so I didn’t plan to spend more. My husband wanted to add another few gifts to L’s gift so that we’re spending around the same amount on each kid.

I told him I would rather not because L’s parents can’t reciprocate it. My husband tells me we can afford more and L has already had a “tough year.” He says the extra $30 for a better gift would just be wasted on fast food. He says L would see his cousins gifts and know that they’re better gifts. I told my husband that L’s mom should get a job and give him a nice Christmas then like J,A, and M’s family.

I also reminded him how I will be paying for and cooking food for the Christmas party everyone will be attending and L and his family probably won’t bring anything because they can not afford to. C looked hurt, as if I was insinuating L did not deserve a nice Christmas because his parents are poor.

Every kid deserves a nice Christmas, I just do not think it’s necessary to spend as much as the people who will actually be giving us gifts. C tells me I don’t know what it’s like to be a poor immigrant and have people treat you the way I’m treating L. C was not angry but looked hurt.

I know C was brought to the U.S. as a child too and had a had a similar life to L. For the sake of peace I bought the extra gifts for L, so total around $35 for him. C still won’t talk to me and i can’t understand why. I spent the extra money, and obviously don’t expect anything else in return.

This reader said she is an a**hole. No doubt about it. 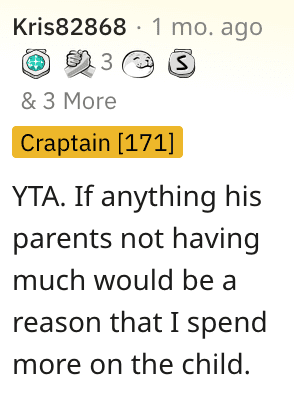 And this individual said this woman doesn’t know the true spirit of Christmas. 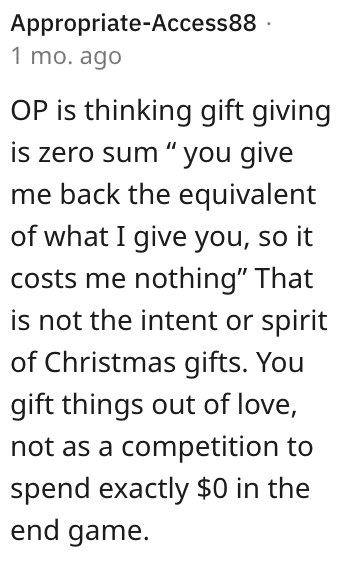 Another Reddit user said this Grinch needs a reality check. 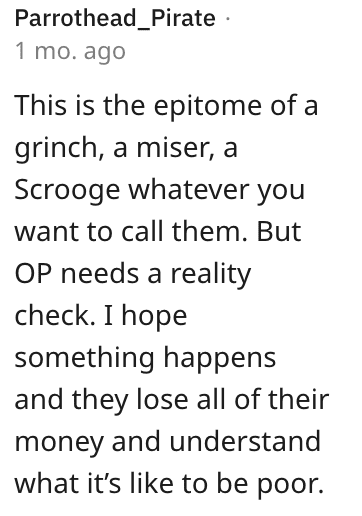