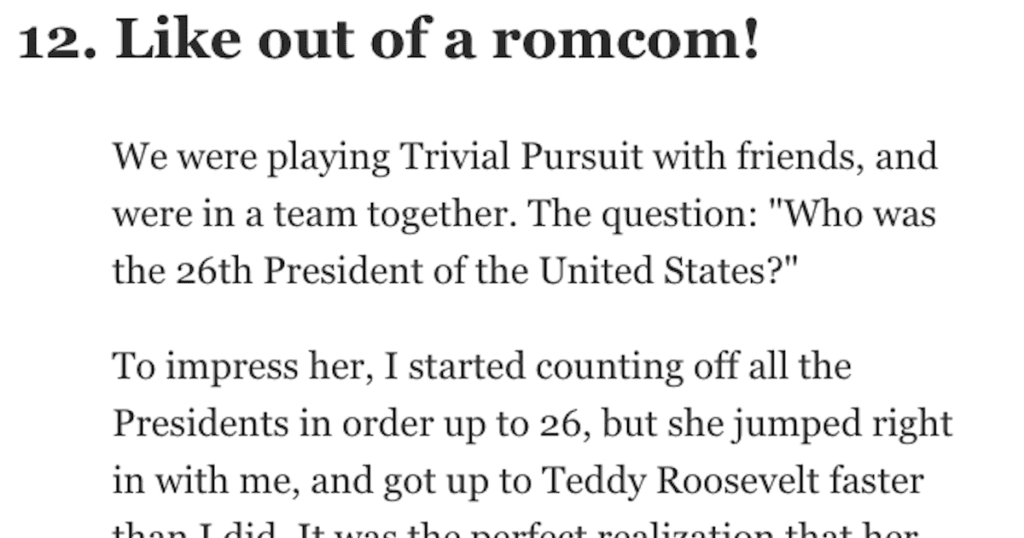 13 Guys Talk About the Moments They Knew They Were Going to “Marry That Girl!”

Ahhh… romance! It’s always nice to think about those times when love was in the air and guys knew that this gal was THE gal.

Here are 13 wistful dudes who believe in love and share their stories on when they made the decision that their GFs were going to turn into wifeys.

1. Cheeseburgers and cursing. So beautiful.

We stoped for food and I ordered multiple cheeseburgers. I was driving and without being asked she unwrapped and handed me my burger.

As soon as one was done she had another one ready. I realized then that some people are genuinely considerate and kind.

Also the first time she called someone a c**tbag.

2. That’s a make or break moment right there.

She went to ‘hop’ on the bed, miscalculated how springy it was, bounced off and got stuck between the bed and the bedside table.

Upside-down, legs flailing in the air.

She couldn’t free herself, and I was too incapacitated with laughter to help her for a good 5 minutes.

3. Sometimes you just feel it!

There was no drama, no having to explain my jokes, my references.

She was as nerdy as I was and am. It just occurred to me that we should marry.

So, I started saying in conversation “When we get married…”

We’re still very passionately in love, and it just keeps getting better.

4. When it just makes sense.

We were childhood friends, and knew each other really well. We started dating after high school, but after a year I moved away for two years. We wrote each other letters every week, keeping them short and friendly. Something I won’t mind sharing with my kids in the future.

When I moved back to the area I wanted to do a big road trip to see my family but didn’t want to do it alone. She ended up being the only person available and with less than 24 hour notice was ready to hit the road. It was a blast of a trip, and everyone kept asking when we were going to get married. We hadn’t actually started actively dating again, and things were pretty platonic at that point, so we just shrugged. After the road trip we spent a massive amount of time together and it just made sense to propose to someone that was and is so special to me.

We had been on a few dates and it was my birthday. She asked what I wanted for my birthday.

I sarcastically suggested a 12 pack of beer, a box of condoms and her in that tennis skirt I saw her in on Facebook.

Sure enough, she showed up to my apartment with a 12 pack, condoms and wearing that tennis skirt.

I had dated a lot of high maintenance girls who weren’t all the comfortable with themselves in a lot of ways. I knew from this she was way different.

I would come to find out she was a goddess in a lot of other ways too. But seeing her in the door way looking every bit the dream for my birthday made me know she was definitely a keeper.

6. That’s how my mother knew I was in love the first time.

Her boss messaged me to tell me she knew when my (at time girlfriend) was texting me, opposed to anyone else, because she would be smiling.

She was driving us back from a great camping trip with friends.

My mind was wandering and I thought, “You know, I wish I could do rad s**t like this with her forever.”

Then I thought, “That sounds like a marriage… HEY!”

I looked over at her, she glanced at me and smiled back.

I then put together a plan; I ask her to live with me in 6 months when her lease is up, after a year if shit is still good I’ll ask her to marry me.

I did exactly that. We’ve been married 4 years and have an 8 month old.

She was spending the night at my place and woke up about 3 am in severe discomfort. Over an hour she started to hurt worse so I took her to the ER. At the ER, she was screaming in pain but they wouldn’t give her any pain meds without first doing a pregnancy test. Of course she went to the bathroom while I was registering her, so she didn’t have anything to give.

It was while she was in the room in the ER, miserable in pain and waiting for the pain meds to kick in that I realized I really cared for her and wanted to make our relationship more permanent. It turned out that she was having a kidney stone and not an alien chest-burster. She struggled with that problem for years until we find the cause.

Bonus: I met her mother for the first time that morning. On one hand I hate the circumstances, but on the other I’m glad I was able to show I could take care of her daughter.

9. Be able to laugh together.

Lost my car in a parking garage after I bungled the night by forgetting my wallet on a fairly expensive Italian dinner date. I was embarrassed and mortified. I just wanted to cut my losses and get home. I was really trying to impress her and literally anything that could go wrong did. To cap the night off I forgot where I parked my car because I was flustered from everything that had gone wrong.

After 20 minutes or so of me running around this parking garage, going level to level, running hand in hand. I could feel her glare and and annoyance on the back of my neck. It was growing. I could feel her quietly thinking “well, this was the worst date I’ve ever been on.” The humiliation finally overcame me and I stopped and turned around. Maybe to apologize profusely, I don’t know, still don’t know. I was preparing myself for that look on her face.

She started to laugh. Not at me. But with me, … without me. Almost inviting me to laugh with her about this poor bastard’s luck. A large wave of relief washed over the dreadful evening.

We stood there on level 2 of the Newport on the Levee parking garage just laughing. I knew at that precise moment that I wanted to marry her.

6 years later, we are married with two kids.

When we gave our vows, we both unknowingly had written of that exact night in Newport and that exact moment. I think perhaps for me, I had fallen in love before, but with her. I never wanted to fall in love again.

When I was 16, an insanely hot girl messaged me on Myspace (yeah, I know) because we had mutual friends and she thought I was cute. We hit it off, started dating, and a few months later I left her in Texas to go on a trip with my family to see my grandparents in Indiana.

It was the first time we’d been apart for more than a day or two since we’d been together, and the separation was brutal for a pair of teenage love birds. We spent almost every night of that trip talking on the phone until 3 or 4am, laughing, telling each other secrets and sharing our hopes and fears for the future.

She was brilliant – talking to her simultaneously felt like I was going on a big adventure and I’d found my way home all at the same time. That was the first time I’d ever felt like every minute spent away from her was a complete waste of time, and that feeling never really went away.

We’ve been together 12 years now, and just celebrated our 7th wedding anniversary.

Sometimes you get it right on the first try, folks.

11. When she just goes with the flow.

I asked my husband, who is too lazy to get his computer and post, so I’ll relay his answer.

It was actually during the trip that he proposed to me on, which I was clueless. We lived in Ohio and had flown out to Colorado to visit with my parents, then we were going to all load up in a car and drive to his parents in Utah. We take the scenic route because my mom wanted to check out Black Canyon of the Gunnison and do a little hiking there. We hiked to the bottom and saw the river, it was beautiful, it was the hike back out that was killer. Us OH people are just dying from the altitude difference, mom and step-dad go on ahead while we try to breathe. During one of our stops he sits on one of those rail-road ties they used to line parts of the trail, I lean against a tree further up the trail. He suddenly stands up and yells “snippybitch, run!” I f*cking ran. I didn’t ask why, I didn’t even look to see what he was doing, I just booked it.

There was a beehive under that tie, and he pissed them the f*ck off. He only got stung twice, we actually caught up to mom and SD who then also ran for a bit. I thought my lungs were going to die.

It was the fact that I didn’t question, I just ran, that’s what made it for him.

I do find it funny that this is his answer even though he already had the ring. I don’t know, he’s a strange one!

We were playing Trivial Pursuit with friends, and were in a team together. The question: “Who was the 26th President of the United States?”

To impress her, I started counting off all the Presidents in order up to 26, but she jumped right in with me, and got up to Teddy Roosevelt faster than I did. It was the perfect realization that her nerdiness and personality matched up perfectly with my own.

When we got married, we had a picture of Teddy Roosevelt on our table at the reception.

We had only been dating for three months, so still some awkwardness here and there. I was working an outrageous amount, and I got phone call that one of my very good friends had just died in a car accident.

I don’t really remember walking there, but instead of my apartment, I ended up at hers. She opened the door to her new boyfriend half-ugly-sobbing.

Instead of being (rightly) weirded out, she listened and cried with me for a couple hours.

The friend who died was the one who had encouraged me (for like six months) to ask my now-wife out. My friend never knew the impact she had.

My wife and I have been married for eight years now.

How can you not love these stories, right?

Got a tale of how you knew she was the one?