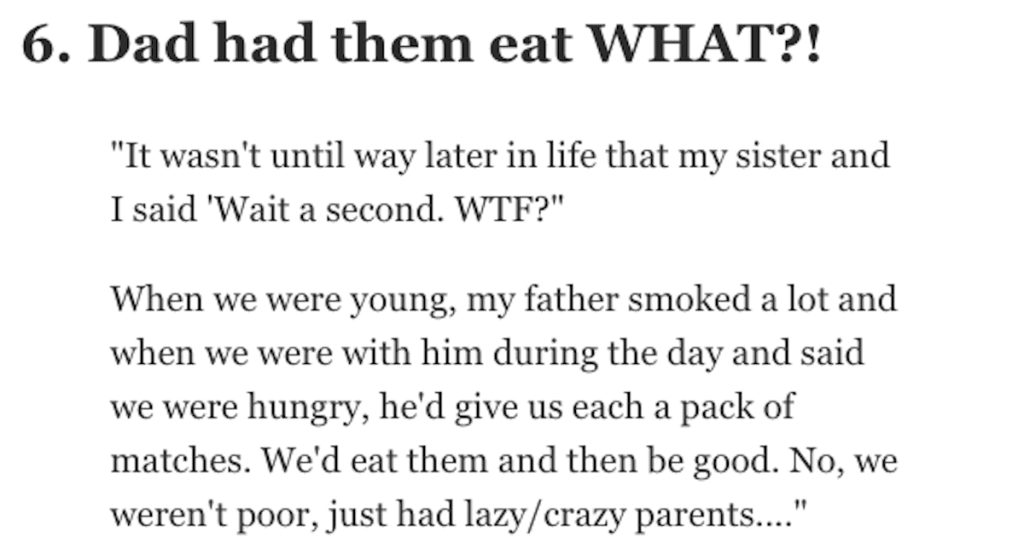 So, you think your parents are bad?

Well, a good askreddit post will fix those illusions quickly, because people share literally everything about their messed up childhoods.

Anonymity is such a helpful thing when getting that craziness off your chest.

13 people. 13 nutty stories. And a bunch of parents (as well as others) who absolutely should have known better.

1. Dad was dumb. And is still dumb, apparently.

“My dad fell victim to many money scams in the early 2000s.

He would always say he’s sitting on a gold mine and I thought we were gonna be rich. Yeah I don’t think he’s learned his lesson, I still catch him replying to bullshit emails.”

“My dad once took three of us kids out for a ride in the pine barrens.

He drove us twenty minutes into the woods on a sandy trail in a minivan. He had just gotten into a fight with my step mother and needed a drive to burn off all the alcohol in his system. He didn’t say much during the ride. We got stuck (obviously because we were in a 2wd caravan) but luckily some 4wd truck dude came through and winched us out.

When that guy showed up dad wasn’t quiet anymore and we left the woods when we were unstuck and went home.

I’m not sure what his intentions were that day but the look on my stepmothers face when we returned made me rethink wether it was a fun ride in the woods or a fuck this life moment worthy of the nightly news narrowly averted.”

3. That brother liked milk. A lot.

“My brother while raising his boys would buy like 10 gallons of milk at a time when it was on sale and then put it in the deep freezer.

He claimed to not have noticed a difference.”

“Oh there’s a difference all right.”

4. A mom literally wanted to kill them all.

“My mom once blew out the pilot lights on our gas stove, cranked up the gas, and told 7 y/o me and my 14 y/o sister to go to sleep.

I went to bed, not knowing any better. Luckily, my sister dragged me out of the house and we sat in the car.

Mom finally changed her mind/ sobered up a bit, aired out the house, relit the pilots, and took us back inside.

“Fend for yourself night” when I was like… 5 and on. Wed have to find our own food that night. I later found out my parents were too lazy to cook for my sister and I who were just 5 and 8.”

“I used to come up with really weird food combinations. Most notably nutella or peanut butter + candy sprinkles wrapped up in a tortilla. As I got older I began toasting it and rolling it in cinnamon sugar.”

“Edit: wow! People are either going “same dude” or “jesus christ how could a parent do something like this to a 5 y.o.” I feel a little better knowing theres so many of us.”

“Edit: to clarify, this happening once a week or something isn’t an issue. With me it gradually went from like twice a week to every other day. Eventually growing up my parents just stopped cooking and if they did it was suddenly a huge deal. Like they’d cook once a week at best. Really chaotic stuff. I became the best improv chef ever, so I’m thankful. But at the same time jesus christ my sister became a pre diabetic at 12 over the lack of nutrition. We didn’t know any better unfortunately.”

“It wasn’t until way later in life that my sister and I said ‘Wait a second. WTF?”

When we were young, my father smoked a lot and when we were with him during the day and said we were hungry, he’d give us each a pack of matches. We’d eat them and then be good. No, we weren’t poor, just had lazy/crazy parents….”

7. Father gave them the credit card and hit the bars.

“My (alcoholic bipolar) father would drop me and my 2 siblings off at the grocery store with his credit card and told us to go grocery shopping. We were young kids when this started. He’d either go hit up a bar or wait in the parking lot before coming back to get us. Sometimes it would be a long wait. Looking back I still don’t know how we were able to run his credit card and no one ever batted an eye. We had to cook too, so it wasn’t exactly healthy stuff.”

“A lot of times the food would all be gone a week or so before he’d take us back to the store. We had to get really creative. We’d joke that there was nothing left but “the goo in the back of the refrigerator”. Honestly surprised we didn’t develop diabetes (although I am hypoglycemic) or obesity or anything serious. We quickly learned not to buy a bunch of candy or sweets, something that kind of impresses me looking back. I learned to keep an emergency stash of food hidden in my room. One of many insane things, but first that came to mind.”

8. Father made them his therapist?!

“Throughout my childhood I would end up being my dad’s therapist. He’d often tell me he sometimes wished he would go to sleep and never wake up. A bit heavy for a 12 year old to hear from their parent I guess.”

“After I became a teen and could drive, he’d call me in the middle of the night while I was at my mom’s house and ask me to rush over because he was sick and needed help. I spent a lot of nights feeding him jello and sitting awake in his room so he could sleep because his medication would make him hallucinate and think demons were going to kill him in his sleep.”

“It wasn’t until I was older I realized I missed a lot of my childhood because I had to parent him instead of the other way around.”

“Eventually he found a wife who takes care of him and cut me out of his life. Apparently he tells her stories about how I never spent time with him and never cared because she sends me rants about how awful I am.”

“My mom stole a shopping cart with my brother. I was like 7y/o and nearly ratted them out because “MOM WE DON’T NEED THAT. I DON’T UNDERSTAND”.

Edit: Failed to mention that it wasn’t just us pushing it home or something. They loaded it into the back of the SUV, right in the parking lot.”

“My inlaws, well mostly my now-deceased MIL and a brother in law swear by trunk food. What is trunk food? It is food that you make, and sometimes cook (sometimes not), and when you go on a road trip, you wrap it up in foil and throw it in the trunk with the spare tire and everything else gross back there. This is only done for long distance trips; when you arrive at your destination, you eat the food. MIL and Brother in law swore that it makes the food taste better. If the food was uncooked, the idea was that being in a hot trunk for several hours would cook it to the desired temperature (in theory).”

“The cakes were probably the “safest.” She would make small individual spice cake loaves and wrap them up and then you’d have spice cake with the gentle aroma of car exhaust.”

“She once made an entire birthday cake for me in the same way, except that it was left in the pan and had icing. And minimal wrapping. I ate a slice to be polite, but I was being very polite. I didn’t eat the rest.”

“Brother in law is the worst though. He is Orthodox Jewish and keeps kosher, which is problematic when traveling long distances, so he’s used to having to pack food with him. He / They used to live in South Carolina and he was driving to Miami to catch a flight to Israel a few times before he actually emigrated there. We live in Central Florida and offered to prepare him some kosher food but he wasn’t having it and brought his own meatloaf out of the trunk of a very hot car on a hot summer day. He wanted to share it with us, but I have this thing about food poisoning so I didn’t eat it.”

“You can only be so polite.

MIL has since passed away and Brother in law now lives in Israel so no more trunk food. My husband, the twin of brother in law has working brain cells and believes strongly in food safety. Thank goodness.”

11. Grandparents were actually kind of adorable in their weed ignorance.

“My Grandparents in Italy would burn TONS of marijuana plants because it was unknown to them and like an unwanted weed on their farms.

I mean, they would never had done anything with it anyways even if they did know but still… they burned lotsa weed.”

12. Mom faked her own death again and again and….

“When I was very young (maybe 5 or 6?) my mother would cuddle with my younger brother and I – she thought it was funny when she pretended to die while holding us.

I was terrified and I will always remember that. She would wake up from “death” and laugh to get a reaction out of us.

That is my earliest fucked up memory of her.”

“I used to babysit my parent’s friend’s kids occasionally.

After I babysit two kids that were 4 and 6, my mom said her friend was happy and I did a good job. I was thirteen.

Then she mentioned that that was good because her friend was distrustful of babysitters since her other two kids had drowned while under a babysitter supervision.

Thought that was slightly odd. No helicoptering in the 80’s!”

I need to reach out to my parents ASAP and thank them for not being THIS crazy, right? That’s how it works?! Heh.