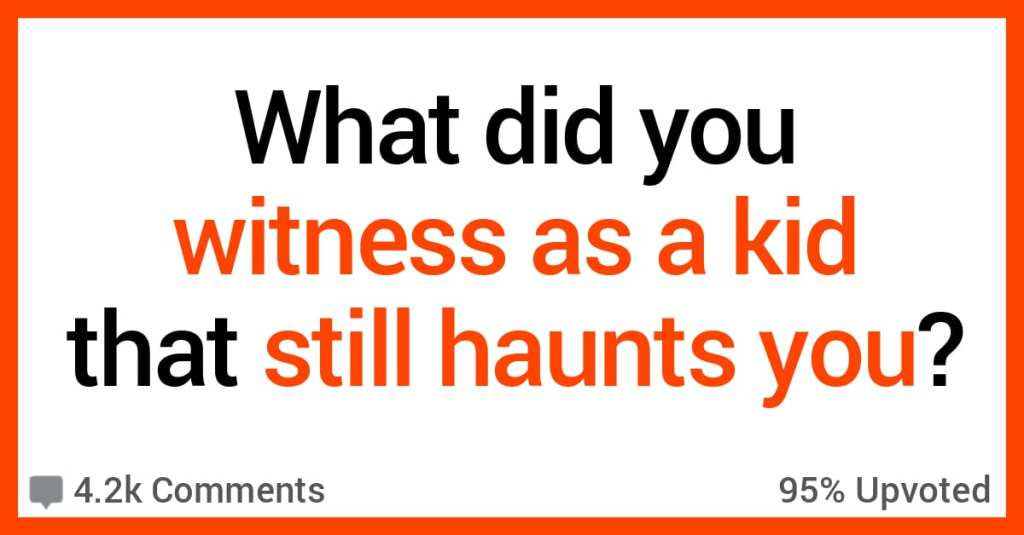 The things we experience in our childhoods stick with us forever.

That’s a fact. And I’m talking about the good stuff AND the bad stuff.

And the bad stuff can really leave a mark that we carry with us into adulthood.

What did you witness as a kid that still haunts you?

“From my bed, if the doors were both open, I could see my parents’ bed.

I heard noises and woke up one night, and saw them going at it.

Made sure my door was closed EVERY NIGHT from then on.”

“That my dad thought that my mom was just overreacting to a stomach ache and wouldn’t take her to a hospital, but in reality her appendix was about to explode.

Thank god my uncle brought her to a hospital, otherwise she would be gone by now.

Still messes up my viewpoint on my dad 20 years later.”

“When I was 10 my grandmother said “ if you would have just answered the phone none of us would be here now would we?” at my dad’s funeral after he committed s**cide and I was his last phone call.

Think about that every day of my life.”

“When I was 9 years old, my mom had a hysterectomy, so my aunt came over to babysit me for a few days while she was in the hospital.

The day my mom was supposed to come home, she called the house and asked to speak to my aunt. My aunt is hard of hearing, so she put the phone on speaker.

As I was walking away, I heard my mom say “she can’t hear you, right?”. My aunt replied no, and my mom proceeded to tell her that there was complications with the surgery, and that the night before as she had gotten up to go to the bathroom, her stitches had come undone. She bled out onto the floor and a nurse found her on the ground. She was worried she wasn’t going to make it.

I’m not sure why my aunt didn’t think I couldn’t hear all of this while the phone was on speaker. I pretended I didn’t hear anything, and ran up to my room, crying the entire night thinking my mom wouldn’t come home.

Everything turned out fine and she was back home a week later. But at 9 years old, overhearing her describe that situation still haunts me.”

“My mom’s boyfriend at the time decided a good punishment for me at about 7 was to lock me out of the house, in a super thin nightgown, at about 10pm in winter.

Luckily my grandparents lived across the yard, so my barefooted self walked through the snow to ask if I could stay with them. Obviously my grandfather was outraged, so he went over ther to “knock some sense into the guy”.

I was dumb and went back to the house to see my mom standing between my grandfather and her boyfriend holding a knife to her wrist and basically saying if my grandfather tried to do anything to him she’d k**l herself.

That’s just one of many fun stories I have of that “lovely man” who is now my stepdad.”

“I think I was 6 or 7 years old and was going to the grocery store with my mom and grandma when we saw a really bad accident.

A kid, who hadn’t been wearing a seatbelt, flew out the windshield and landed in front of my mom’s car. My mom ripped my shirt off and ran to help stop the bleeding while they tried to get help. I don’t remember if cell phones were a common thing at the time, but it felt like an eternity of screaming until an ambulance arrived.

I don’t actually know if the kid survived but the way his body just landed like a bag of bricks is forever burned into my brain.”

“At 9 years old I walked in on my uncle beating my aunt.

I stayed the night with my cousins often. They were 8 and 4. My aunt and uncle had just split because my aunt caught him cheating and found out he was addicted to drugs. My cousins were upset and my mom thought it might cheer them up if I stayed the night we them.

The next morning I heard screaming from the garage. We went to see what was going on and seen him hitting my aunt. My dad had a friend who lived just a couple houses down so I told my cousins we needed to hide and we went to his house. His wife was home and I told her what was going on. She brought us inside and called 911 then my parents.

My uncle was gone before the police got there but he was arrested and sent to prison. My aunt didn’t have any serious physical injuries thankfully.”

I was 8. I went to the mirror and cried. It was the first time I ever realised that I could actually look at myself with judgement.

“My mom picked me and my sister up from elementary school and when we got home I ran upstairs to say hi to my dad who was usually at his computer in their room.

He wasn’t there so I ran into their bathroom and apparently found my dad with his wrists cuts in a full bathtub of water. The only thing I can really remember about that day is the visual of blood spots on wet white tile..”

“My brother’s death. I was five; he was two. Mom tried CRP on him. She was a nurse.

He had undiagnosed cystic fibrosis (he was adopted, so no family medical history was known.) Took me decades to get over that.”

“My dad telling his mother over the phone that he’d found me and was coming right over.

I walked home from school at that age and would take my time, chatting with folks outside the school, maybe stopping at the store or whatever on the way, but that day I was taking a bit on the longer side.

She’d called him to come over because she’d just found my grandfather had shot himself in the head. My father had, in a panic, wanted to ensure I was home safe before he went over to help her.

I still feel so guilty for delaying him. He was so upset–not mad at me–just trying to not cry I think.”

“My Dad, his temper, and his drunken tirades. One night, he was walking around the house with a loaded pis**l (a .357 I think?) after again consuming large amounts of hard liq**r.

I think he wanted to be prepared in case Mom called the police. At one point that night, the gu** discharged, leaving a hole in the mattress of my parents’ bed. I was in high school at the time. Whenever he was at home, I was always on edge.

Looking back, I think it was s**t like this that contributed greatly to my decision to move far away from home after graduating college.”

Me and a group of friends skipped school one day to go to play a soccer match. One of our friends arrived late to the match and with the first touch of the ball he literally blew the ball (he made it explode with one kick) so we couldn’t find anything to do then he suggested to go to swim in the swamp. We all agreed because it was hot that day.

When he suggested it we all thought he can swim like its a normal thing for him. Turns out he couldn’t swim and drowned that day and we couldn’t do anything because we were like 12 years old at that time and we have no idea how to save someone.”

Did you see or hear something when you were. a kid that still bothers you?