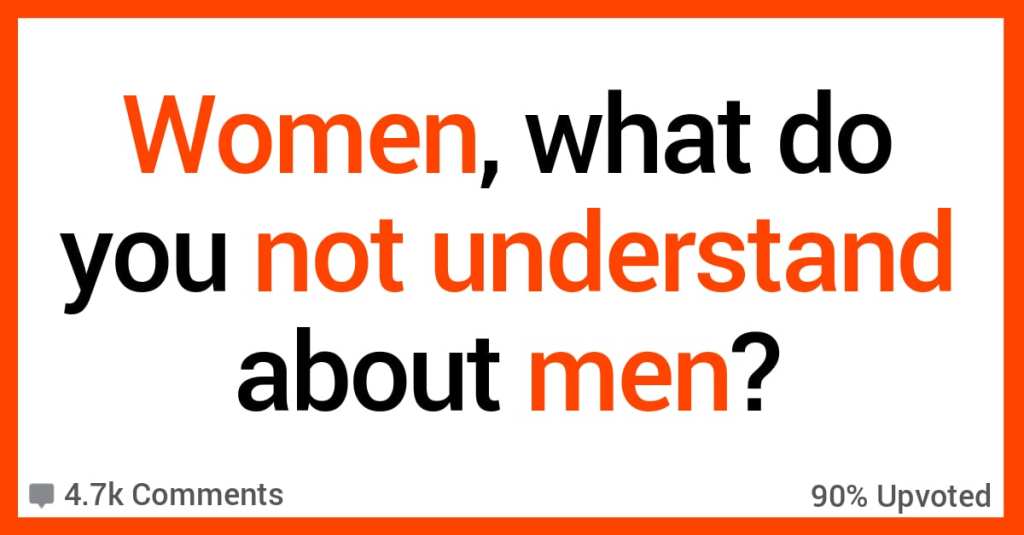 13 Women Discuss What They Genuinely Do Not Understand About Men

Women and men try their best to get along, and usually they make a pretty good go of it. But there are some things that the sexes just DO NOT get about each other.

Today, we’re taking a look at 13 women as they confess what they simply don’t understand about the guys in their lives.

How do they always have warm hands

When guys dm a girl they don’t know. I guess because you like the way she looks in her pictures?

Are you truly expecting a reply or would it be better she doesn’t reply?

Where are you expecting it to go, what would be the best response you would want to get from the girl?

Why guys still wear sandals on campus even in the rain

I have a friend who does this.

His situation is his entire wardrobe is this:

A couple of jackets

I can’t speak for other guys though. This just one situation.

I read comic books, and once read something where a hero asked the villain why they kept trying to take over/destroy/whatever the world even though their team kept stopping him from succeeding. He replied that while they needed to win against him every single time to stop his world domination, he only needed to win once.

Whenever I hear about guys sending d**k pics, I think about that villain’s motivation and assume that d**k pic senders are thinking the same thing: eventually some woman will take the bait and hook up with him.

Okay serious question. I’m 30 and been in one relationship that ended 6 years ago. Haven’t been in a relationship since.

Commenting hearts on selfies when you’re telling me you wanna date me? I don’t understand, so I just stay away from everyone.

How they can happily have sex with someone they despise.

As a woman, I immediately lose all sexual interest in someone if they are a bastard, even if they are gorgeous.

Men don’t seem to care how awful someone is, they still want to bang them.

The way they bash each other as a form of “bonding”.

The guys at work flick each other off and swear at one another, yet that means some sort of good thing?

Also, how they’re able to hang out with other guys, even if they don’t like someone.

They’re able to look past that somehow.

Women would never do that. Or if they did, it would be to make fun of the person.

The answer to the question: “What are you thinking?” Every time I ask my husband that, his answer is “nothing”. How can you be thinking of nothing? Is it just him that does not think? Or is it just me that has thoughts all the time? Or am I just like most other women who constantly have some thoughts going through their minds?

My mind won’t shut up about thinking something… there is always some thought going on, even if it is in the back recesses of my mind. I cannot think of any time that I was not thinking.

My mind cannot be blank.

5. Tough to be Friends

Can I just talk to you without you commenting on how lonely you are and would love a girlfriend?

Can you just not turn into a completely different person once you realise I’m a girl?

Can we please just be friends for at least 20 minutes?!

I just want to have guy friends who don’t constantly want to f**k or at least don’t bring it up every 11.3 seconds.

But also on a more serious note how a lot of men (more than you might think) believe it’s fair for their wives/girlfriends to work full-time jobs and take care of all the housework and the kids as well.

Even many of those who do do their “fair share” still lump to responsibility of house-management onto their wives; they see them as the delegator for all tasks and chores, which is a huuuge job in itself. It’s how you get fathers of seven years who don’t know what to feed their kids when mommy’s away for one night. And then turn around and call them “nagging wives”.

It’s literally, verbatim, the way a moody teenager behaves. These people are adults and yet they can’t grasp a concept that young girls are taught at the age of 13. You’re responsible for your own messes as well.

Why do they call/text ex-gfs once they’re engaged/right before they marry?

Four of my former boyfriends have texted me randomly in the past couple years, and it was a nice enough conversation (two of them fished for more and didn’t get it), but a bit later I found out they were engaged and getting married very soon!

Is it a giving up freedom thing?

One thing I’ve noticed in my work over the years is that a lot of men get genuinely angry to the point of yelling/starting fights if they feel that you are threatening their leadership in any way.

When I first started my job with years of experience I would ask about small ways to improve the efficiency since they were making the job much much harder than it should have been. I was always really polite but no matter what he would get angry and literally throw his keys at me and ask if I wanted to be in charge. It stopped when I stopped trying to help and efficiency is waaaayyyy down.

Why are so many men threatened by a helping hand?

Why do you think it’s okay to go piss (and leave the seat of the toilet in your girlfriend’s house up but that’s a whole other problem) and go straight back into the kitchen for dinner without washing your hands?

If I can wash my hands between touching your dick and handling food, why the fuck can’t you?

Gals… do you relate to any of these questions? Is there anything you truly don’t get about guys?

Let us know in the comments, fam!