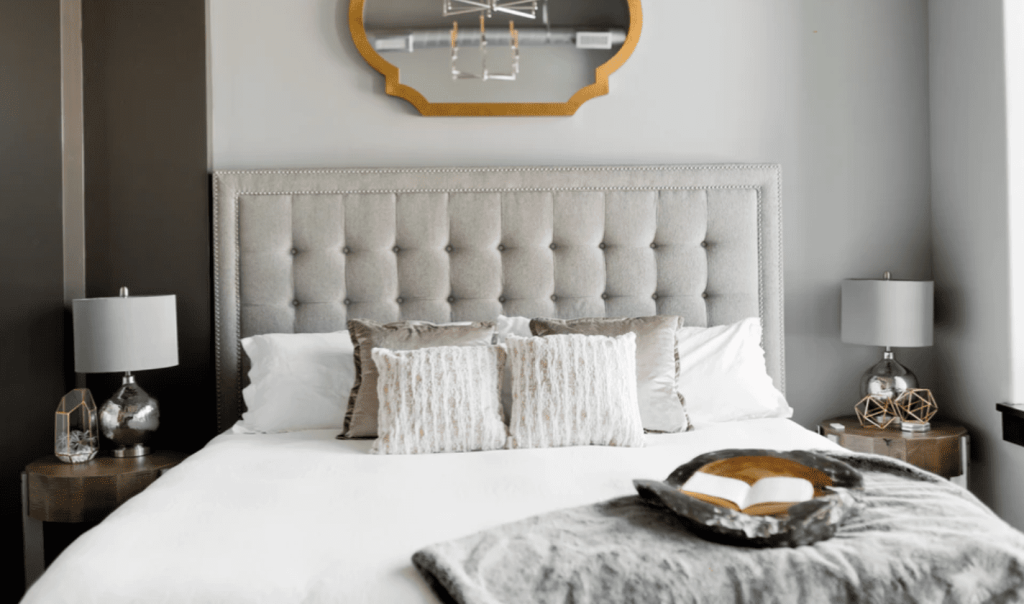 If you’re an Airbnb host, the best you can hope for is that your guests are respectful and won’t trash your place or be too needy…but it doesn’t always work out that way.

It’s like running a hotel in some ways, so you’re going to get customers who are total jerks sometimes, which is a shame.

Let’s check out these stories from AskReddit users who also happen to be Airbnb hosts.

“Co hosted a super host air bnb fit about four years. Never had any crazy property damage or violent guests but there was this one time…

There was a group of girls in town for a bachelorette party who were also nurses. They stayed without any problems and seemed to clean up alright after themselves, suffer from the obligatory overflowing recycling (alcohol bottles etc).

That is until I saw a weird speckle on the duvet. It looked like someone had flicked red paint and I figured it was blood and went to get some hydrogen peroxide before bleaching. But as I looked up, I noticed another small smattering on the blinds. Then the door. And the wall.

Each one was almost too small to detect if you weren’t paying attention, but they had my attention now so I proceeded through the whole house (white btw for easier cleaning/bleaching between guests) on a magical mystery tour of tiny blood splatters. Furniture, blinds, sheets, tables, walls, you name it.

The trail encompassed the whole house. It wasn’t until I got to the bathroom that I deciphered what must’ve happened. There, in the bathroom in the trash were used syringes, IVs, and tubes ask covered in blood and boldly greeting me with no lining.

Having several friends in the medical industry who also like to drink, I was aware that they sometimes employ the help of a saline drip to sober up. Well these ladies must’ve been shlammered because they could NOT figure out how to get those IVs in and created a Jackson Pollock of bad decision juice all over the house as they fumbled to destroy the evidence of their bender.

Took me all day to find and bleach everything. Had to cancel the next guest cause I was so paranoid that I hadn’t gotten to and sanitized every inch of that house. That was enough to ban bachelorette parties forever.”

“Rented out my lake house to “an older couple who will be having their two adult children visit” for a week.

They didn’t know that my in-laws own the house next door and were there. Turns out 9 cars and 25 people in their 20s showed up, so my father in law called me.

I couldn’t get there until the next morning and by then they had ripped apart my furniture, put a hole in a wall, scattered broken glass and trash all over the lawn, tore down my fire pit, and someone had broken into my locked storage shed and stolen a $1,200.00 electric trolling motor.”

“A couple rented my home and did an obscene amount of drugs and flushed some left over down my toilet which clogged it.

“There are almost too many to recall but among the top ones was a bridesmaid who got drunk at a wedding and proceeded to violently assault her boyfriend bc he wouldn’t propose.

She threw him into 3 walls (all requiring extensive repairs) which led to her arrest.

The quality of guests has declined sharply as Airbnb has grown.”

5. So messed up that people would actually do this.

“Hosted what we thought was a family of 4 for a long weekend.

Turned out to be couple of party planners who invited 280 people (according to the police report filed that night) and left nearly every room and fixture with some type of damage.

Also found several types of drug paraphernalia and broken glass all around the house. Worst part is that they had hired/invited? 3 huge dudes to literally prevent us (homeowners) or any neighbors from meeting with the people whose names were on the reservation or go in inside that night, leading neighbors and then us to call the cops later on.

This is in a generally quiet neighborhood with a ton of families and retirees.”

“My parents recently had an incident.

The house was rented by someone using a false identity. They threw a huge banger at the house with underage guests and, according to neighbors, there were guests having s*x in the yard. We ended up finding out after several guests broke into the neighborhood pool and broke the fence and a window at the community building leading to the cops being called.

The house was trashed. Cigarettes and joints all over, alcohol spilled on the floors in nearly every room, broken cell phones, over $100 worth of food they bought left out. They broke into the locked cabinet that had cleaning surprise and extra linens in it.

We found all of the kitchen knives in the bedroom closet as well as cut up bars of soap. Luckily the damage to the house was fairly minimal; screens from the windows popped out, small hole in the wall, broke the locked cabinet, pulled washing machine out from the wall.

“My parents rented our our second home to three families that were part of a soccer tournament. Six adults and five children.

When we came to the house after they left we discovered that they ruined the wood floor by having leaking coolers sit on it. The damage to the floors costed over $600+. Not to mention they left dirty diapers; just laying on the floor or on random shelves, not a single one in the many trashcans around the house.

And lastly they raided the pantry of wine and anything of food that was in there. The pantry was meant for if a guest needed something last minute to cook instead of running to the store.

The man who booked the house had left two days earlier then the other two family’s who completely trashed it. He was understandable and they never got the security deposit back.”

“Two guys from Wales came in for the night, we made it clear that we only offered a room with a double bed to sleep in (and toilet of course), so no parties and no disrespectful behavior.

Found them the next day passed out in the kitchen where they puked in and over everything, even the plants, even in the cat’s litter box, it was awful. I kicked em’ out immediately.”

“Tons of problems with guests. One opened up a water pipe under the sink when we refused to give a refund because he was disturbed by noise on the street (it’s a downtown rental).

We’ve had wall paintings, kitchenware, mirrors, and the thermostat stolen not to mention bedding and misc other items.

One time there was c*caine and condoms littering the entire condo.”

“One woman complained that it was dusty underneath the furniture. She also left a scathing review calling me a devil worshiper, because she found Harry Potter books on the bookshelf.

Another man threw away all the decorations he didn’t like. He had booked 3 months, but that still doesn’t mean you get to throw my stuff away. I discovered them in the trash when he cancelled his 3-month reservation after 4 days, and then tried (and failed) to get a full refund.

Another couple decided to take a break from packing their car to leave, so they could have s*x one last time. The police knocked on my door because the car was illegally parked (due to the packing), so I had to go upstairs and interrupt them in the middle of f*cking to let them know the cops were looking for them.”

“We’ve had hundreds of guests and only one problem one. Couple came in for a festival and one of them leaned on the tub faucet drunkenly and snapped it off. Water started pouring full force into the tub.

It was late and night and they ‘didn’t want to bother me’ so they didn’t tell me until about 15 HOURS LATER. My water bill was hundreds of dollars and I had to call an emergency plumber.

Airbnb reimbursed me eventually but it was a huge hassle to get paid. They wanted photos of the damage but it was a pipe snapped off inside a wall. Note to other owners- get lots of pics and documentation before filing a repair claim.”

“One guy that was staying with us was an alcoholic. Didn’t really figure it out until it was too late.

He sh*t and p*ssed all over the room. It looked like the sh*t demon from Dogma got ahold of the room. There were empty beer cans all over the floor. The Airbnb guest sleeping in the room next to him noticed the foul odor and let us know.

We threatened to call the cops and thus he left immediately. We had to rip up all the flooring and refloor the room.”

“Not me but a friend.

He rented his house to 8 adults and they left something burning on the stove and burnt down the front of his house.”

“I’m not old enough to rent a home but this comes from my dad. Short and simple, when we came back home we found a lot of blood in the kitchen, and a cut off thumb.

And my dad’s bedroom smelt like “Someone had s*x for at least 2 hours”.”

“I wasn’t directly renting my place, but I was a translator for a dude who rented like 30 apts. in México City.

The everyday problem came from Americans who looked to get free nights and discounts for the most ridiculous reasons, we had a Chinese grandma burn down the apartment because she left the dryer on for hours while she took her dog for a walk, BUT BY FAR the most disgusting experience came from a Chinese guy in his early twenties. He rented the apartment for 3 nights.

A few hours later after his check-in, he sent a photo of a bed, completely covered in cash, no context and no message. Then he sent a photo of him getting a black, Mercedes Benz SUV out of the Polanco concessionary, squatting next to it with him dangling the keys. The next photo is him squatting in the hood of the SUV.

He left without returning the keys to the doorman so a locksmith had to tear down the door.

The place was a mess. Food rotting in the little lounge. The bin was completely empty and the floor and furniture had trash all over them. Snacks, bottles, plastic bags, etc. Then the room… again, it was all littered up. Condoms and plastic bags lying on the floor.

The bed had a huge stain of sh*t, then the bedsheet was rolled up, and inside there was a trunk of sh*t. The towels had skid marks of his *ss and the toilet paper was left untouched. And he made all of this by himself IN THREE DAYS.

He happily paid all the extra charges and later that year he rented the place again. That last time he even did his bed and left a basket with gifts, so I guess he had at best, some conscience left in his brains.”

Have you ever had any bad experiences with Airbnb?

As a host or as a guest?