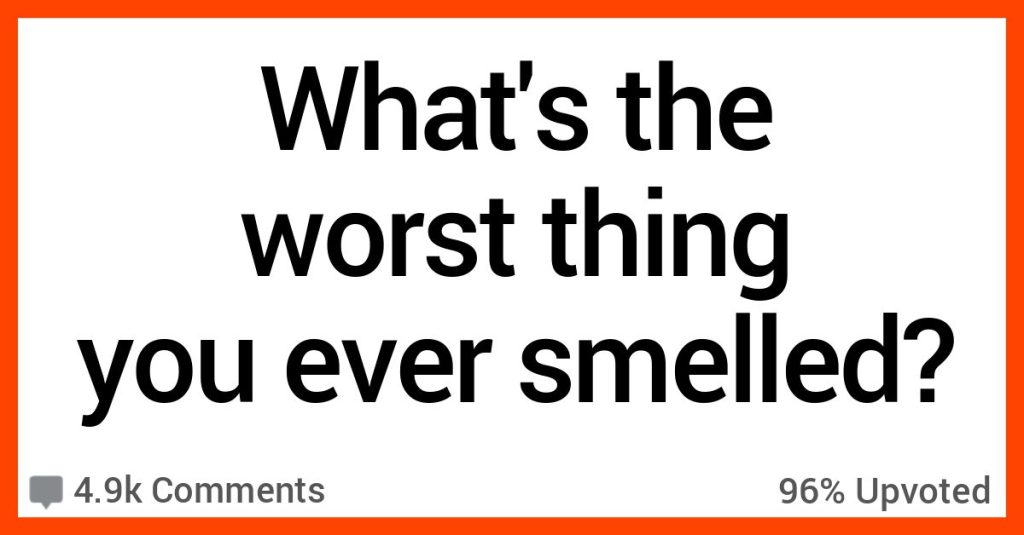 I was working for a catering company in Chicago and my boss said to me, “hey, go clean out that freezer that has been sealed shut for the last six months…I’m not sure what’s in there, by the way…”.

So I did as I was told…and that moment still haunts me sometimes.

The freezer had been unplugged and was filled with potatoes in the air-tight contraption for a long time…and it was f**king terrible.

What’s the worst thing you’ve ever smelled in your life?

“Me and my homies all pi**ed in a Gatorade bottle when we were kids.

Worst smell EVER after sitting out for a bit.”

“Homeless dude who was covered in s**t, had a necrotic wound full of maggots on one leg, and oozing cellulitis on the other.”

“I work in healthcare. My answer is any necrotic wound.

But in a specific case, it would be the lady with the d**d lower right leg and foot. Yes, her foot was shriveled up and black.

The smell would linger in any room she spent any time in. She had vascular surgery that went terribly wrong and she lost the bloodflow to that entire lower limb.”

“Cleaning out flooded basements after Hurricane Sandy, there was a fridge that had gotten knocked on its backside. Door closed.

Full of rotten food, flood water, sewage, and sitting there without power or fresh air for weeks.

…until we opened it to empty it out. My god.”

“I worked in a burn unit for a while. The smell of burnt human flesh was diabolical. The room has to be kept at 85°F with 95% humidity.

The burned skin can’t thermoregulate, so a big risk of burns is hypothermia. The smell is so pervasive, you’ll smell it on your clothes for days.”

“My husband is a funeral driver. We live in BC, and we recently had this record breaking heatwave, upwards of 40 degrees when we’re used to under 30 during the height of summer. Lots of people d**d.

They didnt have enough drivers to keep up with the calls so some deceased clients had to wait to be picked up for like 1-2 days, essentially being microwaved in their rooms with no air conditioning. You can prolly figure out the rest.”

Riding ATV through field and ran over a bloated ground hog. It sounded like a shotgun blast went off followed by A yellow green haze and then the smell hit me. I rode as fast as I could home.

Threw away all my clothes and showered in the yard with hose and Dawn. I still taste that smell.”

Bought it to scare rodents in our house.

The moment you get a whiff you recognize it.”

“I remember being on a placement in my first year of pharmacy school. The door opened and a few seconds later, I could smell something very…sharp and unpleasant.

Not like body odour, or s**t, etc. Poor guy that came in had a tumor or something involving his jaw/mouth/one side of his face. I assume it was inoperable. I have never had to try so hard in my life to act pleasant and pretend nothing was wrong. I actually gagged after he left, I thought I was going to vomit.

“Rotting bodies of migrants in the southern California desert.

We radio reported it to the ranger station, we thought it was an animal carcass at first, but close enough to smell we could see their shoes and some of their clothes intact.

Park Rangers and Border Patrol took care of it about an hour after we radioed it in.”

“Science class the teacher brought some fake sewage for us to test and try to clean out.

Even through the mask I was so close to puking.”

“The rotting meat we had to put in the bin outside that was in our freezer when Katrina knocked out our power for days.

No, wait, after having read someone else’s post, it was the ungodly stench inside the back of a van that held the furniture and belongings of a man who d**d alone at home, and eventually liquefied. I was on a crew that was told to empty it out.

We couldn’t go more than halfway into the van, it was that repulsive. We walked out on the job. “You want that s**t out of there? Get it yourself.” That was a job for a hazmat team, not day laborers.”

“Once I saw this disgusting looking insect I had never and I have never seen again in my life.

It was like a huge pitch black cricket with grotesquely big rear legs, I stepped on it and my god the smell that came out of it ill never forget, it was so strong and unlike something from before.

I threw up and I’m so f**king disgusted by insects ever since.

In the comments, tell us about the worst smell you’ve ever experienced in your life.

Let’s get disgusting together!