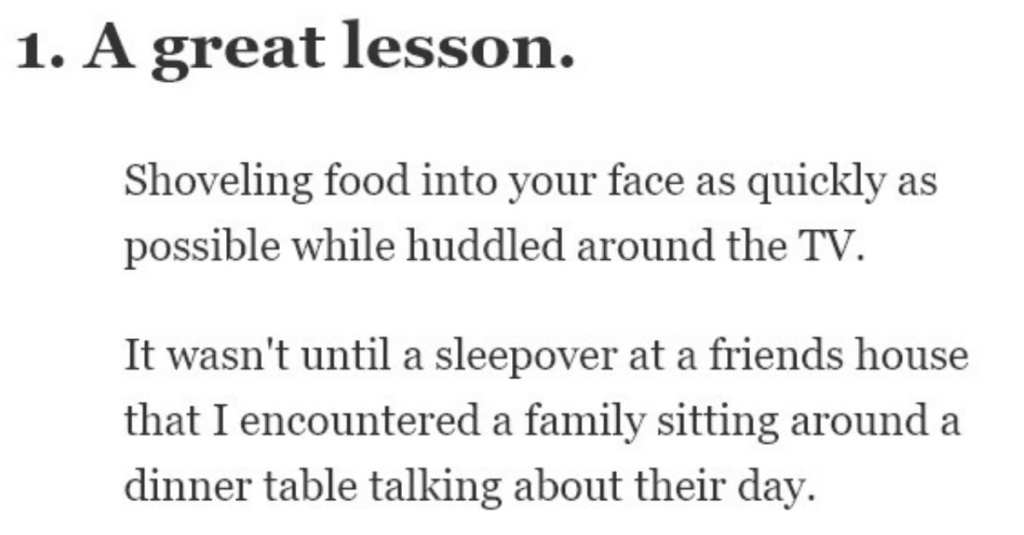 When we’re kids, we live in a bubble that’s largely made up of our family. Our parents, our grandparents, our siblings and cousins answer our questions and show us the way the world works.

We have no reason to question them, and really no avenue to ask questions, even if we wanted to.

Which makes me believe these 15 people, who found out later in live that their families weren’t exactly “normal,” aren’t alone.

[My parents] were racist. According to them all money could have been up a N-words butthole. When I was in 4th grade I actually asked a black kid if they did that…

I remember in year 8 in school we watched a video about mental health. One of the kids said that at a low point he considered suicide. I didn’t think that was a big deal, because I thought about killing myself almost every day.

I thought it was normal and everybody did it.

Sitting together at the table for meals (especially dinner).

We frequently got McDonald’s, had TV dinners, or had ramen/mac and cheese. I didn’t know until I was an older teen that families actually sat down to talk to each other EVERY DAY because I thought that only happened in shows and movies.

Sitting down at the table makes me uncomfortable, even to this day. Like, I don’t even know how to prep the table.

I grew up on a farm outside a small town, didn’t realize until I started going to school that running around naked outside often, playing with hatchets and pockets knives, or breaking off pieces of salt lick to suck on, were not normal things.

My parents fostered 2 young girls very close to my age. The things they expected from my parents/thought were normal were so sad. The eldest tried to undress for my dad, he was mortified. They thought they would get in trouble for using soap in the bath. They asked permission to get drinks of water, and to go to the bathroom. They were amazed we weren’t locked in our rooms at night, amazed I had my own room and they had theirs. They didn’t know what bed frames were.

Jesus. I was going to say cutting pickle spears into little triangles to eat alongside your sandwich…

This thread went in a way different direction.

Over the period of about a year when I was 9-10 years old four different people on the street I lived on died unnatural deaths.

The old lady next door electrocuted herself trimming the hedges. One of the neighbor kids I played with accidentally shot himself playing with his father’s gun (in front of his sister), another playmate’s father was a cop and was shot and killed in the line of duty and a 16-year-old girl was r*ped and murdered in her own house (never solved, even though everybody knew who did it).

I also had a cousin I was close to die in a car accident, but he didn’t live on the same street.

So with all that I just assumed that was a normal rate of death.

So naturally, I assumed that I was going to die at some point in the near future.

Took a few years to get over that.

Building homes for snails and slugs when it rained.

My older brother and I would love to go outside when it rained and collect slugs and snails to put in these little pebble shelters wed make for them in the backyard.

My parents sleeping in separate rooms.

My mom snores like crazy and I understood why my dad would hate that.

Turns out, dad was gay

7. You never think about that.

My parents have what we now know was developmental disorders but was previously known as “being slow”. Think it was second grade when I started doing math for my parents. We went out for shopping or dinner, then I’d check the grocery receipt or tally the tip. In more ways than one I became very independent from my parents at a young age.

I didn’t realize until late high school, interacting with my boyfriend’s family, that normal children don’t speak to their parents like equals. It was, awkward to say the least. It took many years to learn how to be respectful to your elders and not throw my “weight” around. I had thought every kid needed to keep their parents in line.

My parents slept in different beds my whole life. I guess it started when my dad got injured in the army and my mom was afraid of hurting him in her sleep, then he snored, she liked to stay up and read in bed. It just worked. They had a super happy marriage. I remember bringing new friends over and giving them the tour “this is my dad’s room, this is the bathroom, here’s the office and this is my mom’s room”. They would be so confused lol.

My mom still is upset that whenever we went to my grandma’s she made them sleep in the same bed even knowing they never did. They were so used to sleeping alone they stayed up all night worried about keeping each other awake.

I have to add that getting up late at night and looking for one of them only to find them both in the same bed was always awkward.

5. Everyone should use them, though.

They’re cotton squares or rounds filled with dried corn. You put them in the microwave for a heating pad and the freezer for an ice pack.

I still use and make them, I just didn’t realize nobody else used them until like… High school lmao

4. Parents are so weird.

Being forced to eat way more than what I could, until my stomach would hurt for hours. Not traumatizing like other stuff in this post, just something I don’t miss.

On a lighter note, walking in stealth mode throughout the whole house all the time because I wanted to be like Pocahontas when she spies on John Smith.

3. It was a different time.

Cracking open cans of beer and pouring them into styrofoam cups.

So my parents could drink while they drove the car.

Talking to you parents and them being affectionate.

What do you mean you play “board games together” and no one yells? You willingly sit down and spend time together????

Dated a girl and the first time I met them, her mom hugged me. Weirded me out plenty. She just sits around the living room doing her own thing while her parents may also be there.

Turns out, a lot of people.

Shoveling food into your face as quickly as possible while huddled around the TV.

It wasn’t until a sleepover at a friends house that I encountered a family sitting around a dinner table talking about their day.

At the time it made me super uncomfortable but I’ve learned to slow down and appreciate it more with time.

I’ll bet we can all think of some strange things about our upbringing, right?

Share it with us in the comments – we’re here for it!