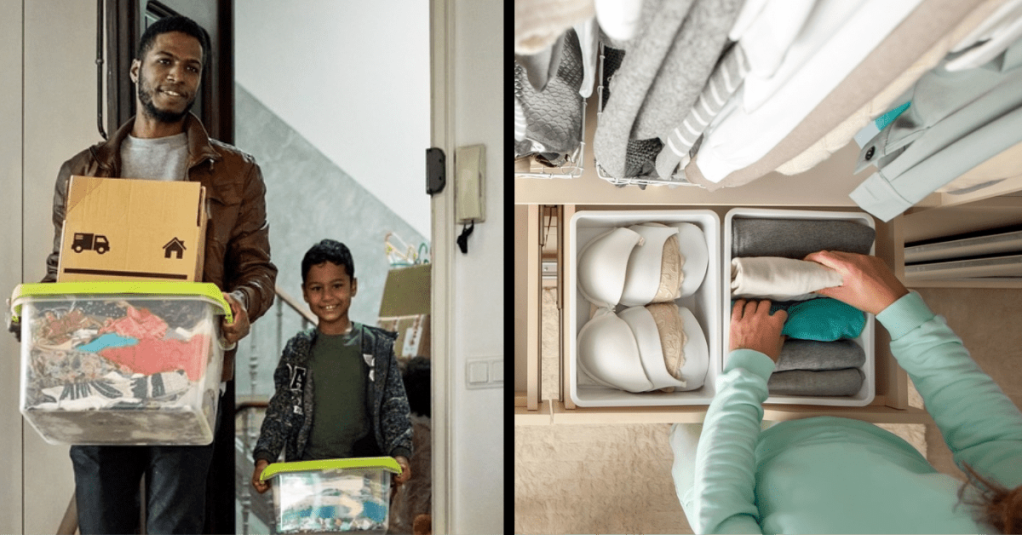 20 Things In Your Basement That A Professional Organizer Would Toss

I think that, hoarders aside, most of us can appreciate the feeling we get when we manage to de-clutter a space in our home. Having too much stuff, especially that we don’t use, can really start to feel like a burden after awhile, don’t you think?

That said, it’s always harder to throw away our own things than other people’s, though, which is why sometimes professional organizers have an easier time de-cluttering your home than you do – and if you’re staring at a cluttered basement right now and wondering where to start, these professionals have some ideas. 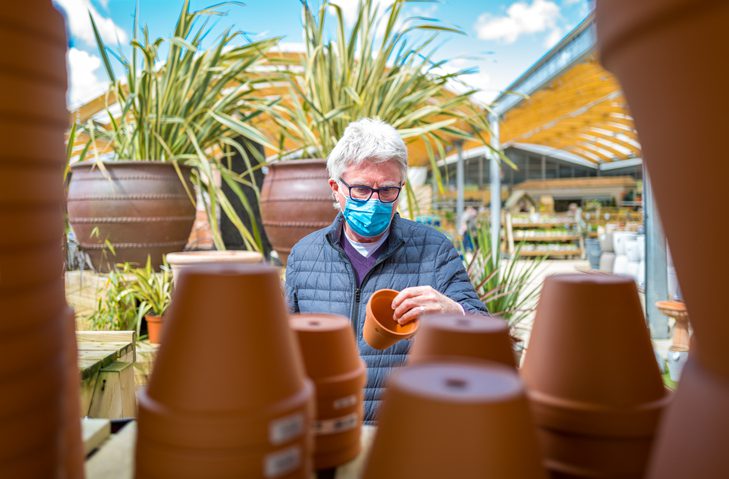 If you’ve got a bin full of vases or flower pots that stay in the basement gathering cobwebs, you don’t need them. Throw out anything that’s broken and donate the rest. 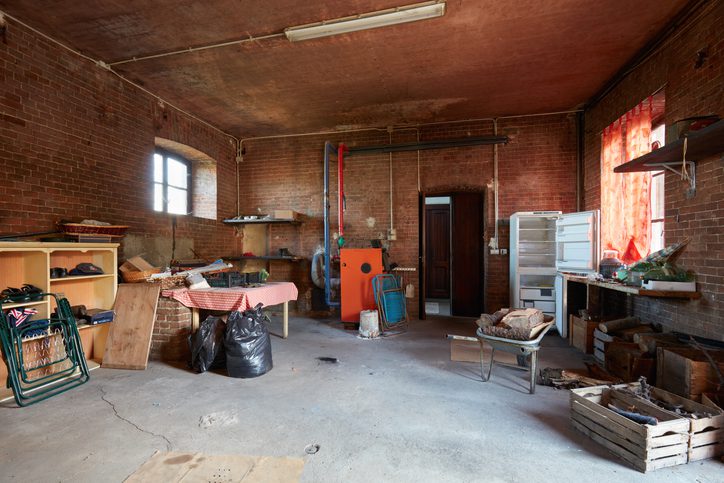 We’re all guilty of amassing a box or bag of just…things we don’t know what to do with when we declutter the upstairs. We throw them downstairs, promising to go through them properly at some point, but then we just…don’t.

The advice of a professional would be that if you haven’t needed or wanted or even looked in that bag since you put it down there, toss it and don’t look back. 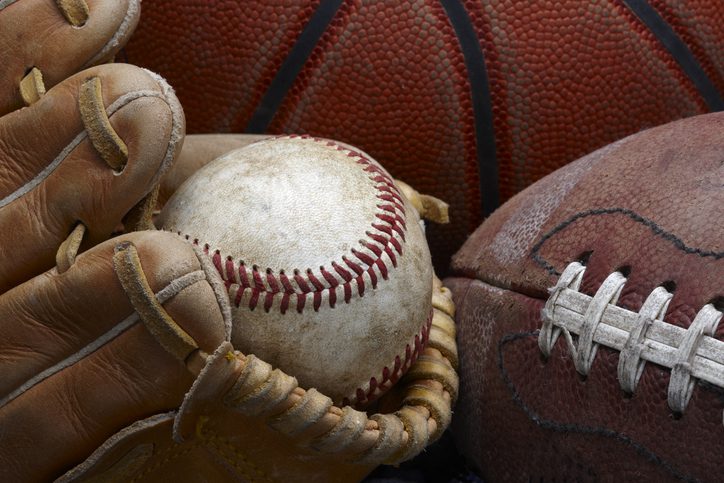 Balls, bats, sticks, cleats, knee pads, helmets – if they’re for a sport you don’t play anymore or are likely to need replacing if you decided to take it up again, donate or toss them.

We all like to think we’re going to get back into whatever we used to do, but the fact is, you probably won’t – and the stuff is just taking up space. 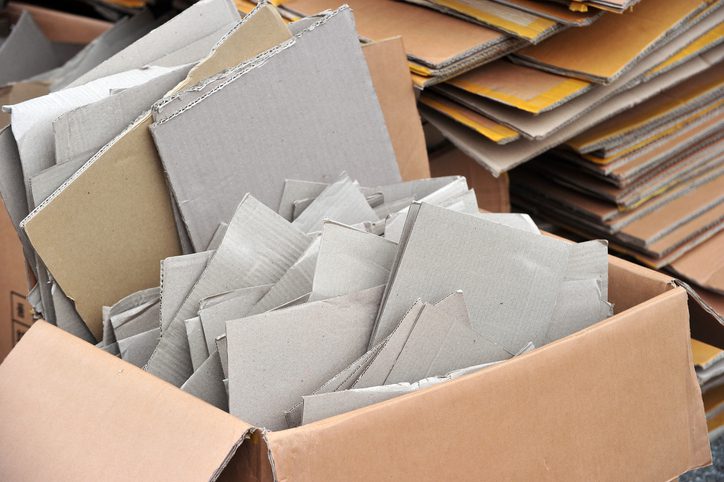 When we buy expensive appliances or electronics, or even just move, we end up with “nice” boxes we can’t seem to let go of (for some reason).

Not only are cardboard boxes fire hazards, the truth is that they’re just cluttering your space – you’re never going to use them again.

16. Things you’ve been meaning to donate. 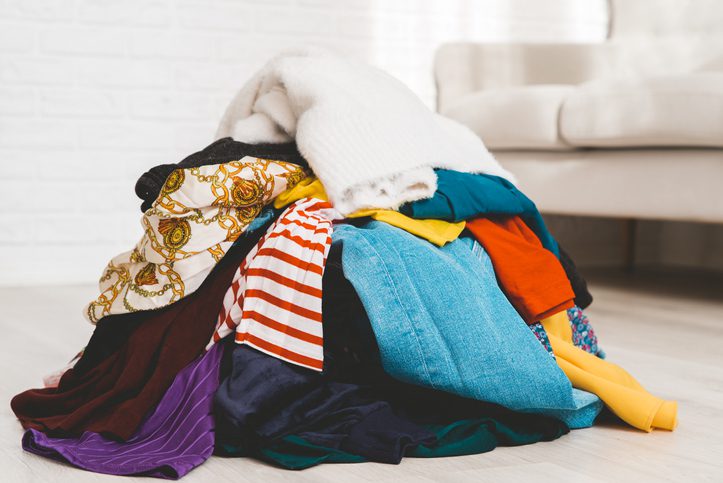 We have such good intentions when we sort through our things and make a pile of things to donate. We mean to do it, but then things never get packed up, you don’t call to schedule a pickup, and suddenly you’re just storing it instead.

Do it right now, and get that stuff out of your house. 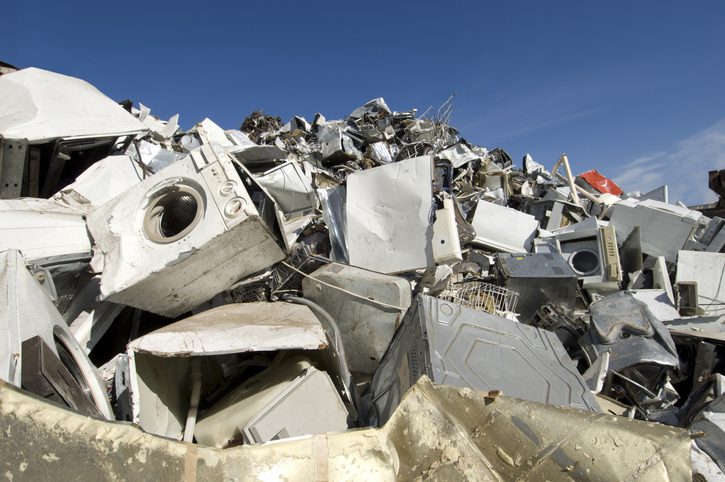 There is no rationale that makes these things worth holding onto (no, you’re not going to use them for parts).

Finding out how to properly dispose of what you’ve got and get it done. You’ll feel so much better afterward! 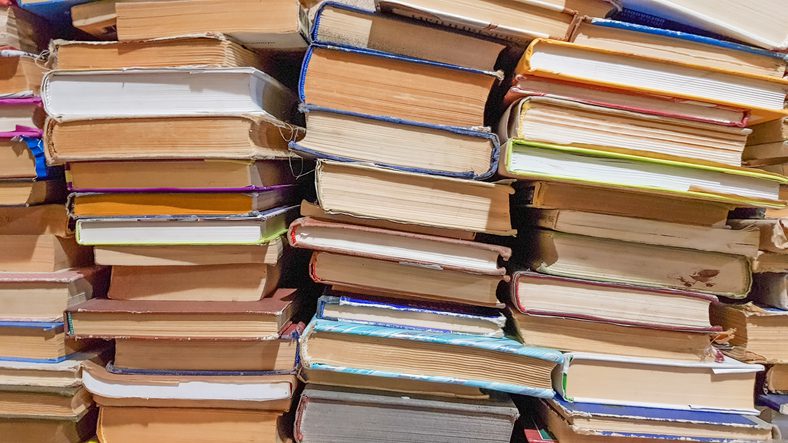 We all like to think we might need to reference those one day, but if you didn’t read them the first time around, what makes you think you’ll reference them years later?

Your local library or secondhand book store might take them, but if they won’t, go ahead and recycle those, too. 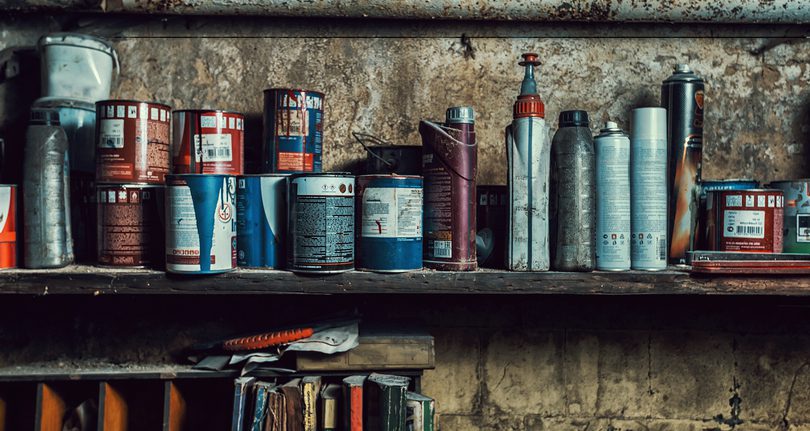 If it’s the paint that’s still on your walls, hang onto it (or at least hang onto the label) in case you need touchups. Everything else? Trash it.

You will need to research a proper way to dispose of hazardous materials, first – fair warning. 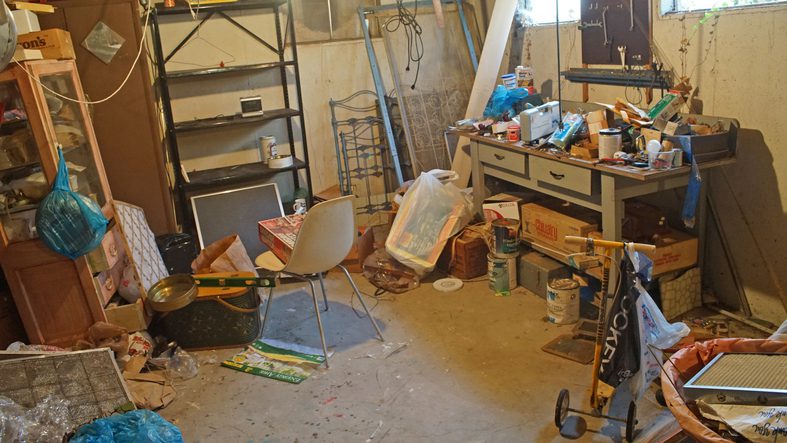 If it’s not hanging on your wall, there’s a reason for that. Unless you’ve got rooms that aren’t finished, you can feel confidence getting rid of unused artwork. 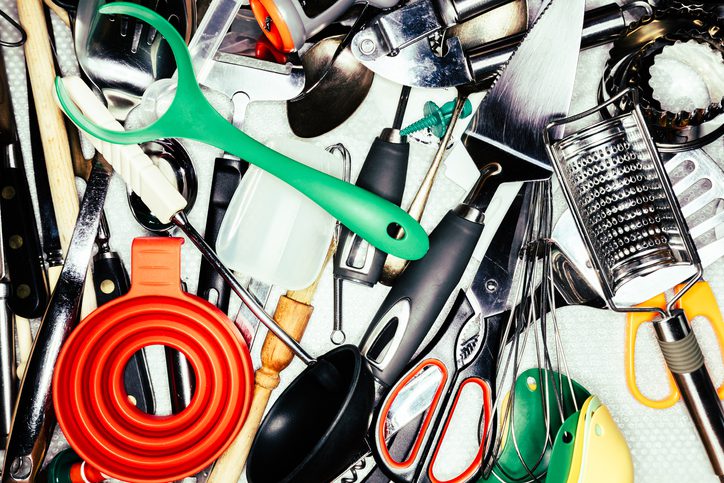 Kitchen gadgets are so cool to have, but if you don’t make bread or waffles or ice cream as often as you thought you might (read: never), there’s no reason to hang onto bulky equipment that’s just taking up space.

You know which ones we’re talking about, friend. 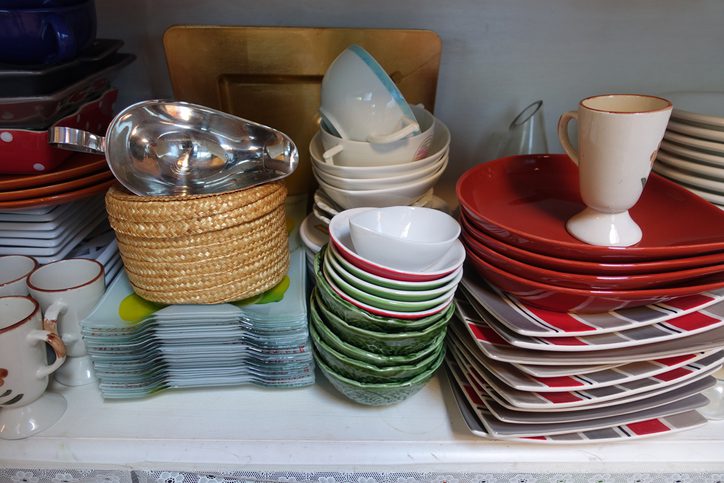 Much like the donate pile, we’ve all got that section of things we’re planning to sell…but we never get around to it.

Unless you’re ready to commit to a sale or taking pictures to post things online, just put these things with your donate stuff and let it go.

9. Exercise equipment no one is using. 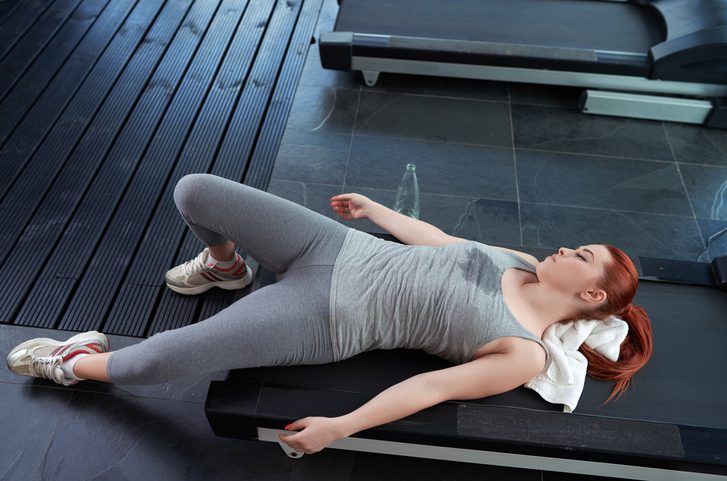 Look, I’m not trying to call you out, here, but if you had grand plans to work out at home only to find that you’re someone who needs the social aspect of the gym to feel motivated, don’t look back – sell or donate that stuff and don’t feel bad about it for one second. 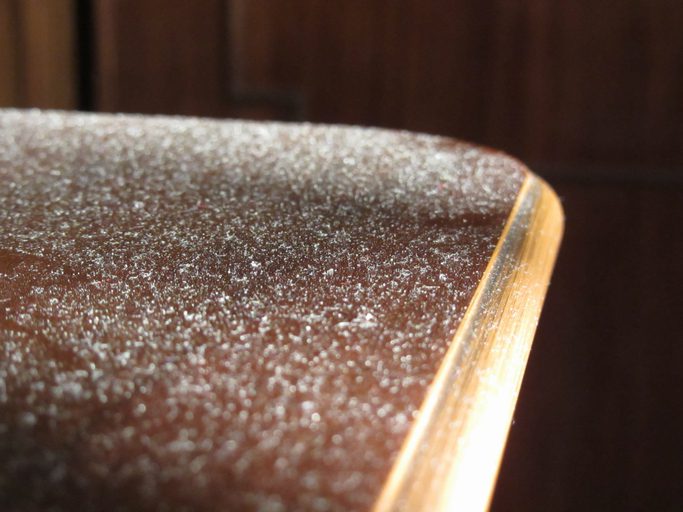 It might be a dresser your kid has outgrown or something your parents gave you that you’ve moved on from, but there’s no reason to keep it.

Sell, donate, or pass them along to someone who will actually use them. 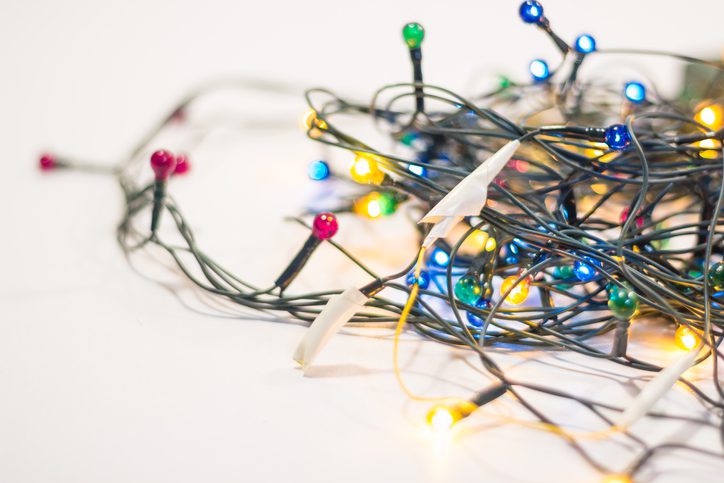 Why do we all hang on to strands of holiday lights that aren’t working? We think we’ll use the bulbs or the fuses, or maybe that we can get them working again, but we all know that’s not true.

Throw them out, along with any other decorations that are missing pieces or that haven’t found a place in your home the last year or two. 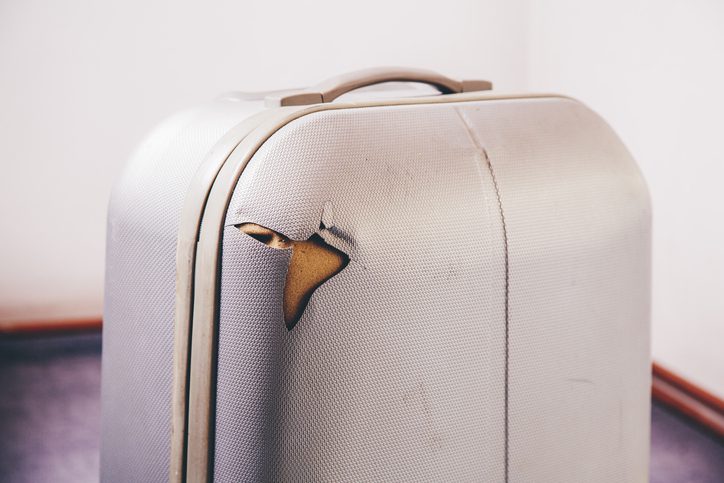 They’ve got wonky wheels or missing zippers or they’re not the right size – whatever is stopping you from using it on a trip, you know it’s time to let it go. 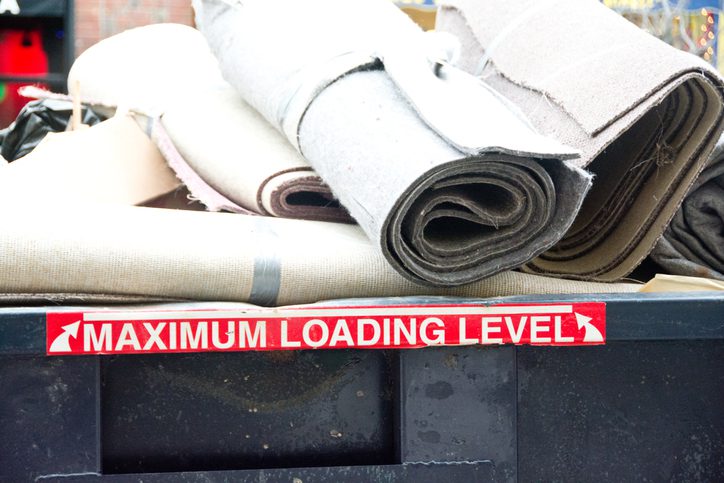 Extra tiles from your kitchen or bathroom reno, or maybe you replaced your flooring and have extra carpet or hardwood planks, but they’re honestly just scraps.

If they’re in decent shape, you can donate them to a Habitat for Humanity ReStore. 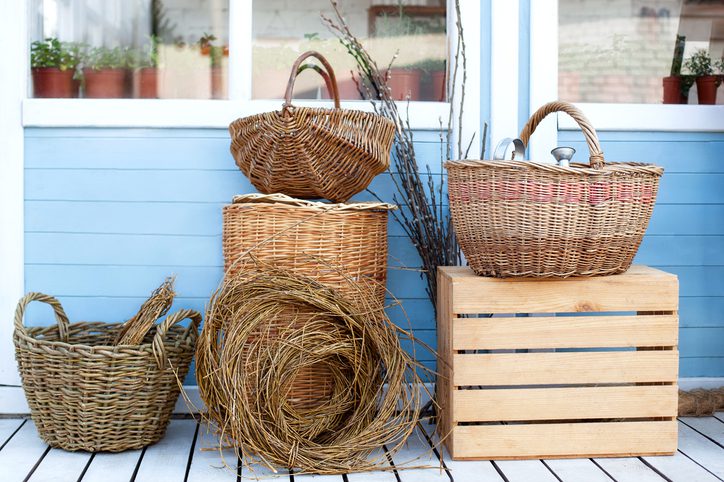 Wicker turns brittle and broken in a fairly short amount of time, so get rid of all of them.

Also, that picnic basket? You’re going to use a cooler instead. You know it, we know it, we all know it. 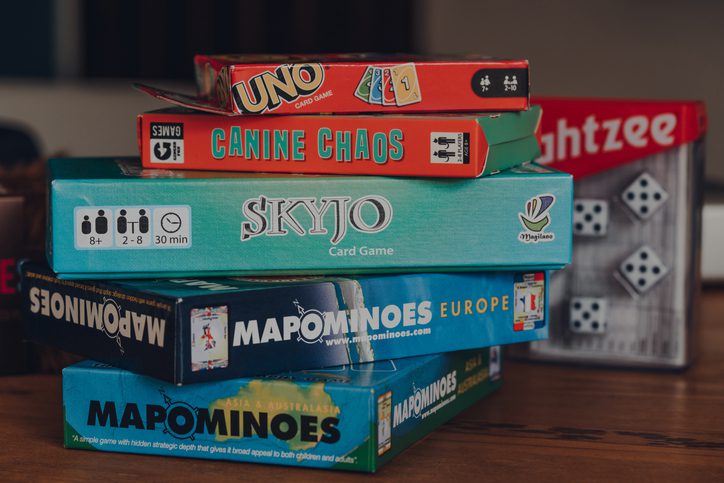 Puzzles that are missing pieces, board games missing tokens or cards, whatever it is, you’re just going to buy a new one.

If it’s been in your basement gathering dust, toss it into the trash instead. 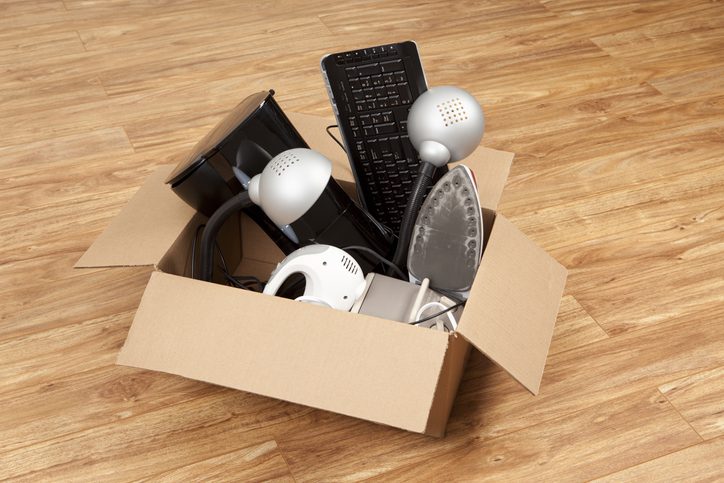 There’s a reason that lamp, or lampshade, is down in your basement instead of being used upstairs – it’s broken or you don’t really like it.

So, there’s no reason to keep it! 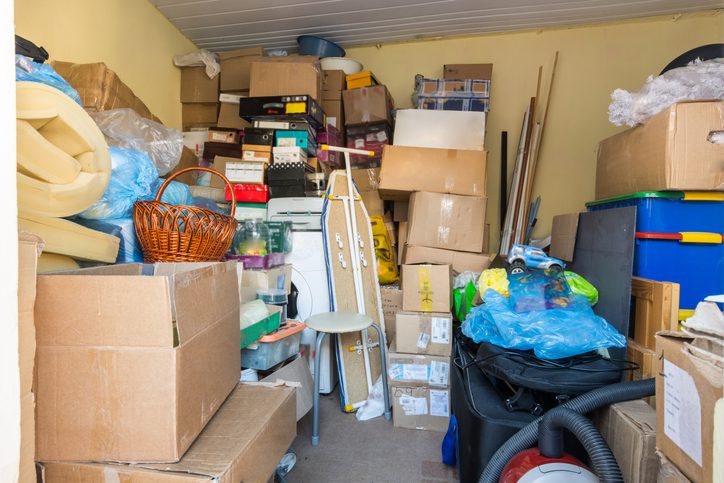 Whether it’s your kids, your parents, or a friend who needed somewhere to store their stuff “just for a while,” chances are your obligation has run its course.

Ask the person to come and sort through it to see if there’s anything they want and then get rid of the rest.

I’m feeling unnecessarily called out by this post, y’all!

How do you decide what to keep and what to throw out? We’re all ears for tips in the comments!