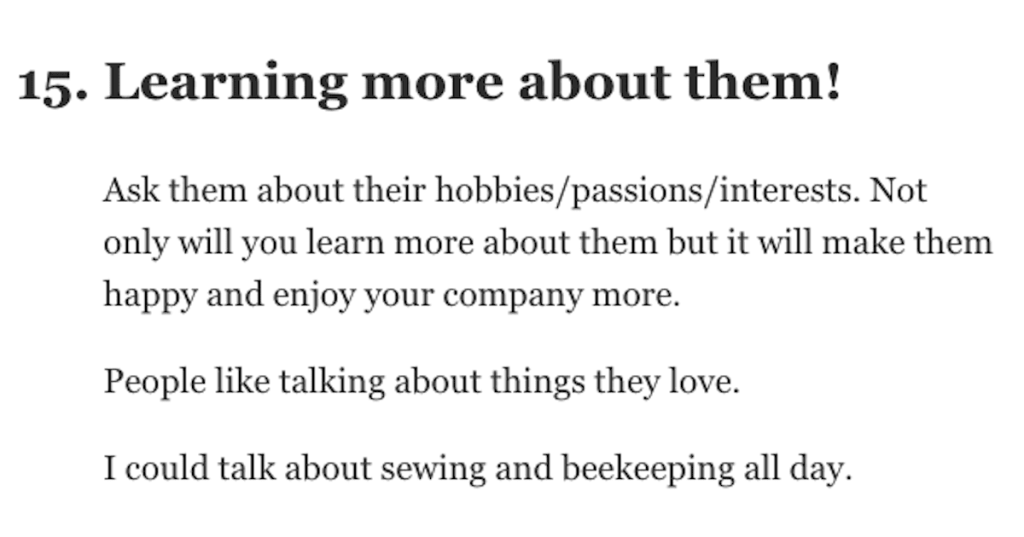 Depending on your personality, it might be easy or super tough for you to approach a person you find attractive. That said, even if you find it simple to talk to strangers, you might still be at a loss as to how to start a conversation that will lead somewhere meaningful and/or interesting.

If you’d like a few conversation starters to keep in your back pocket, these 29 people swear these openers have a pretty good success rate, so give them a shot.

I’d always jokingly ask if she missed me. This annoys her so much she asks me something in return.

Cue a nice, old casual conversation between the two of us that usually lasts half an hour as that’s the time it takes for the next student to arrive and, depending on who it is, either joins the conversation, doesn’t care, or drags one of us away.

So we both got buckets of chicken…

19. This is such a hard question to answer.

Top 4 favorite movies of all time, it’s the best when it’s a movie you wouldn’t really expect from them or haven’t heard of.

18. All valid questions if you ask me.

What is your name?

What is your quest?

What is the air speed velocity of an unladen swallow?

If she/he is quite attractive, during a conversation that involves a bit of more in-depth talk, like aspirations and what not, find a good way to segue into “What do you feel are 3 amazing things about you that have nothing to do with your looks”.

It’s a good one. Leaves a solid impression if you actually genuinely wish to know her/his feelings on themselves. They’ll remember it and that’s a good thing.

Do you work at the zoo?

15. Learning more about them!

Ask them about their hobbies/passions/interests. Not only will you learn more about them but it will make them happy and enjoy your company more.

I could talk about sewing and beekeeping all day.

14. If you’re looking for a certain type of person.

Who was your favorite figure that contributed to the fall of the Byzantine Empire?

13. That’s how you know whether to walk away.

Ask them what they have done today

Ask a follow up question or relate it back to something if you can before asking a follow up (Did it take long? I use to do insert what crush did here. Was it difficult?)

If they gave an answer longer than a sentence, then ask them a question about themselves but have this set up beforehand depending on how long you have known this individual.

If they give a sentence answer, try another follow up question.

If they give one to two word answers, it means they’re either busy or not interested so you’re sh^t out of luck.

12. I can actually see how this could lead to a fairly hilarious conversation.

11. To be fair, that’s an interesting topic.

A few years ago I ran into my crush and the only thing I could think to ask him about was to ask how much he knew about squatters rights law.

We’re married now. 10/10 would recommend this channel of discussion.

10. Anyone who can’t sympathize isn’t worth your time.

You heard about Pluto? It’s messed up, right?

9. Not enough people get asked this question as adults.

What is your favorite dinosaur?

8. You need to know right away what sort of person you’re dealing with.

Compliment them on something they’ve accomplished not a physical trait they were born with. For example, don’t compliment their eyes but rather their running ability or singing etc. Then say you wanted to get to know them better. And then ask questions and listen. Good luck!

6. Things are classics for a reason.

5. …so maybe we could watch the show together sometime?

“i wish they taught us more about vikings”

4. Go with what we all have in common.

Idk, I matched with a girl on Tinder and simply opened up with “How’s the apocalypse going?” and we had an amazing conversation.

Do you like Phil Collins? I’ve been a big Genesis fan ever since the release of their 1980 album, Duke. Before that, I really didn’t understand any of their work. Too artsy, too intellectual. It was on Duke where Phil Collins’ presence became more apparent. I think Invisible Touch was the group’s undisputed masterpiece. It’s an epic meditation on intangibility. At the same time, it deepens and enriches the meaning of the preceding three albums.

Christy, take off your robe. Listen to the brilliant ensemble playing of Banks, Collins and Rutherford. You can practically hear every nuance of every instrument. Sabrina, remove your dress. In terms of lyrical craftsmanship, the sheer songwriting, this album hits a new peak of professionalism.

Sabrina, why don’t you, uh, dance a little. Take the lyrics to Land of Confusion. In this song, Phil Collins addresses the problems of abusive political authority. In Too Deep is the most moving pop song of the 1980s, about monogamy and commitment. The song is extremely uplifting. Their lyrics are as positive and affirmative as anything I’ve heard in rock.

Christy, get down on your knees so Sabrina can see your a$$hole. Phil Collins’ solo career seems to be more commercial and therefore more satisfying, in a narrower way. Especially songs like In the Air Tonight and Against All Odds.

Sabrina, don’t just stare at it, eat it. But I also think Phil Collins works best within the confines of the group, than as a solo artist, and I stress the word artist. This is Sussudio, a great, great song, a personal favorite.

2. If this works just go ahead and propose.

What music do you listen to?

If you can establish some common ground, you have an excuse for conversation whenever a new album you both like is released.

If you try any of these, report back and let us know how it went.

And if you’ve got any great opening lines of your own, make sure to leave them in the comments – we can use all of the help we can get!